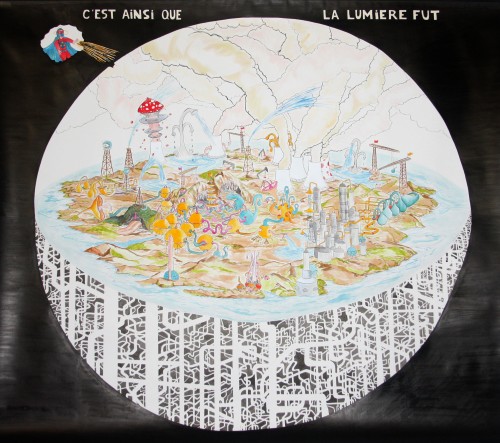 The artistic direction of the first French private art collection dedicated to sustainable development is entrusted to COAL by the Greenflex – Ethicity group.

COAL accompanies the Greenflex – Ethicity group in an action for sustainable development through art, with the creation of a thematic collection of contemporary art as well as the implementation of a partnership with the artists Lucy + Jorge Orta.

The founder of Ethicity, Elisabeth Reiss, a well-known figure in the world of sustainable development, and Frédéric Rodriguez, CEO of the Greenflex-Ethicity group, have decided to mobilize and promote art as a lever for changing representations and behaviors in favor of environmental awareness.

To do this, they call upon COAL, the Coalition for Art and Sustainable Development, which accompanies them in this process. COAL’s mission is to build a thematic collection of “art and sustainable development” and to develop synergies between Greenflex-Etyhicity on the one hand, and the artistic world on the other, in order to promote projects related to the preservation of the environment, the mobilization of citizens and their awareness.

The first works in the “Art & Sustainable Development” Collection

The artistic direction of the collection is assured by Lauranne Germond, COAL’s director and curator. The collection, inaugurated on January 30, 2013 in the company’s new premises located in the 9th arrondissement, brings together for its launch works by Thierry Boutonnier, Lucie Chaumont, Camille Goujon, Malgorzata Lempicka-Brian and Lucy + Jorge Orta.

These artists have in common their will to engage a deep reflection on the consequences, direct or indirect, that man has on his environment. They move and stage, through various practices, from installation to photography, through small or large-scale drawing – the main current ecological issues.

Through Thierry Boutonnier’s questioning of current agricultural production methods, Malgorzata Lempicka-Brian’s on the instrumentalization of the organic link through the prism of the “organic” label, as well as those of Lucie Chaumont and Camille Goujon on oil and nuclear energy, the first works in this new collection intend to resonate with the global issues defended by the Greenflex – Ethicity group.

COAL has also initiated the establishment of a partnership between the companies Greenflex – Ethicity and the very involved artists Lucy + Jorge Orta, around their project Antartica and the universal Antarctic passport which results from it.

In order to support and nourish the artists’ approach, Greenflex – Ethicity has created a website for the project, allowing the greatest number of people to become “citizens of the world” and to animate this community. As a partner in this artistic project for three years, the company provides its internal skills and environmentally friendly technical resources at every stage of the process (choice and supply of servers, choice of software, ethical management of private data, etc.).

To celebrate this association, Jucy+Jorge Orta will present passports to the company and its guests at the January 30 inauguration.