A year of programming for the Europe of possibilities

The REcyclerie and COAL will embark you all year 2016 under the sign of Europe. Each month, COAL will present an artist from the country honored by the Europe of Possibilities, the REcyclerie’s program of exchange and sharing of sustainable alternatives on a European scale.

We will talk about circular economy, urban agriculture, sustainable solutions, but also lifestyle, cuisine and art of living. The common thread of this program is to draw inspiration from our neighbors, to circulate good ideas and solutions for tomorrow, to help each other, to create a European network of good practices and to eliminate borders.

Each European destination is honored during a month, through a weekend of festivities, an exhibition proposed by COAL, workshops, films, documentaries and professional meetings. The RECYCLERY will welcome all those who want to share good ideas and will relay every day on its website and its Facebook the shares that have taken place.

Each month has its own destination…

The United Kingdom – March 3-11 – In March, the REcyclerie is going to discover these English experiences and will share them with its recycling friends! COAL opens this cycle with an exhibition by Rob Montgomery for a month of March dedicated to the United Kingdom in collaboration with the Nuke gallery. This sculptor and poet, who defines himself as a “melancholic post-situationist”, is known for his site-specific installations created from light and text. Montgomery invests public space in the tradition of urban artists to make it a space for free expression. With subtle references to Jack Kerouac or Ezra Pound, Montgomery’s work pushes us to be more mindful of environmental and ecological issues by alluding to the unsustainability of this electric city we have created and highlighting the need for a radical transformation in our way of life.

These two works are from his last exhibition presented by the Nuke gallery in Paris where the artist explored ecological and social issues on the occasion of the 10th anniversary of Nuke, the self-portrait of the polluted generation, and as part of ArtCOP21.

Greenland & Denmark – From April 9 to 16 – In partnership with the Polar Festival, we head for the fascinating Greenland, home to the second largest reservoir of fresh water and where global warming is twice as fast as on the rest of the planet. COAL invites the Arctic Perspective Initiative (API), a transnational art, science and culture working group founded by Matthew Biederman and Marko Peljhan. Eager to highlight the peoples of the Arctic, API invents collaborations between cultures, artists, hunters, scientists and indigenous engineers. The installation presented at the Recycle Center brings together flags of the nations and peoples of the circumpolar region. 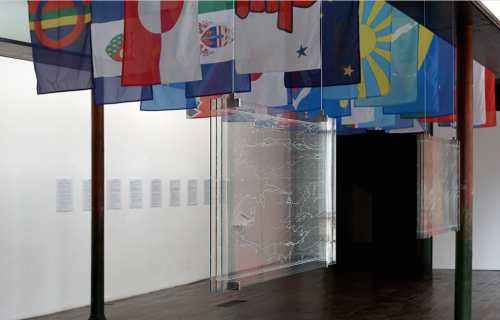 Greece – May 4-11 – Greece has suffered the greatest economic crisis in its history. In order to rebuild, the inhabitants call upon mutual aid and develop by themselves many new initiatives that are more responsible and sustainable. For this month of May dedicated to Greece, COAL presents the artist Nikos Papadopoulos at the Recyclerie.

Nikos Papadopoulos was born in 1970. He lives and works in Athens and studies painting at the Athens School of Fine Arts. Since 2000, he is a member of the Filopappou Group. He was recently awarded the new CERN Accelerate Laboratory Art Program for his work that combines the study of nature and science. At the REcyclerie, he creates a site-specific work whose starting point is Monet’s Le déjeuner sur l’herbe. The opposite of the human process, which wants that in the open air is deposited on the ground all our stuff in order to have a picnic. The artist works here the ground so that it comes to be posed like a tablecloth on our table. This tablecloth is made by different qualities of soil.

France – July 9-15 – Last year, the COP21 was the engine of an unprecedented citizen mobilization. All over France, sustainable initiatives have been brought to the forefront. To not forget them, we reserve them our month of July. COAL invites Thierry Boutonnier to present his work “Frech Egg Vending Machine” in a new version. 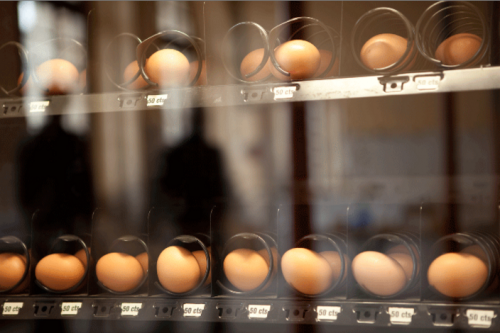 Thierry Boutonnier, born in 1980 in the south-west of France, grew up in his parents’ dairy farm. He creates actions and objects in interdependence with ecosystems as for Le Domaine de Chamarande (2012), the Domaine de Belval (2014), Stuwa and the Grand Paris Express (2016). His work has been shown in Canada, Germany, Poland, Switzerland, at the Paris and Rennes Biennials and at the FIAC. In 2010, he was awarded the COAL Art and Environment prize for his project “Take roots” in Lyon. In 2010, he created “Frech Egg”, a vending machine diverted (the program and the engines of the machine are modified): the visitor introduces a coin in this distributor filled with fresh eggs and attends the fall of the egg which irremediably breaks, metaphor of the fragility of the resources and our irresponsible behavior. It works in a way that highlights our conditioned consumer behaviors. The desire to contemplate the destruction of a fresh symbolic product, puts us in front of our self-destructive mechanisms. Finally, in front of the apparent choice of the same, we operate an alienated gesture and we press the button. In 2016, with La REcyclerie, Thierry Boutonnier imagines a new version of the work, a reversal of “Frech Egg Vending Machine”. Rather than fighting fire with fire by causing irreversible collateral damage, “seed eggs” will take the place of fresh eggs on the shelves while the monetary transaction will be replaced by a weighing of the soul evaluated with a feather… A spelling mistake in “Frech”? It’s done on purpose! “Frech” means bad in German, it’s “French” without the N, and a little nod to Marcel Duchamp’s “Fresh Window”. A story of fall to refresh…

Hungary – November 19 to 25 – After the ecological disaster of the Ajka aluminum plant explosion in 2010, Hungary, which is lagging behind in terms of sustainable development, is gradually adopting emerging initiatives. As part of Hungary Month at La REcyclerie, COAL invites the artist collective Gruppo Tökmag to present the work “Les gravures murales sont indélébiles” from November 1 to 13.

With this large-scale installation presented at La REcyclerie for Hungary Month, András Tábori and Tamás Budha of the Gruppo Tökmag collective, took as their subject graffiti, and particularly a set of engravings found on the walls of the urban space of Budapest. Adepts of street art, the two artists consider the street and its walls as open exhibition spaces. For them, the marks left by mostly anonymous authors reveal a set of hidden phenomena, popular and civic expressions that they collect during their explorations of urban environments across Europe and reproduce in artistic installations. They currently have a photographic collection of over 6000 of these graffiti. The artists then operate a displacement of these urban signs by modifying their scale and their support, giving them a new meaning. Like metropolitan archaeologists, they reveal the almost invisible marks, most of them a few centimeters long, and yet revealing of our society.

Here the engravings represented on a suspended brick wall are divided into three categories: those that have lost their meaning due to the difficulty of deciphering them and the effects of time, those that find unexpected interest in the eyes of the artists, and those that endure in the minds of the people, retaining their meaning, universal, beyond the centuries. These engravings, imperfect and realized in a spontaneous impulse, question the intention of the people who realized them: what could they think, what did they want to make pass by these realizations? Are they works of art when their authors are for the most part simple passers-by? Indelible in the sense that it is very difficult to erase them, they remain in their place and can, in this sense, be considered as irreversible markers of urban expression.

Scandinavia – December 10-16 – The Scandinavian region is a champion of renewable energy: 100% of electricity in Iceland comes from renewable sources and public transport is among the greenest in the world. For this last month of the Europe of Possibilities program, COAL invites the artists Magali Daniaux and Cédric Pigot to offer a selection from their collection of videos triggered by the motion sensor of a camera they installed on the Ny Ålesund International Research Station in Svalbard, Norway, in 2012. 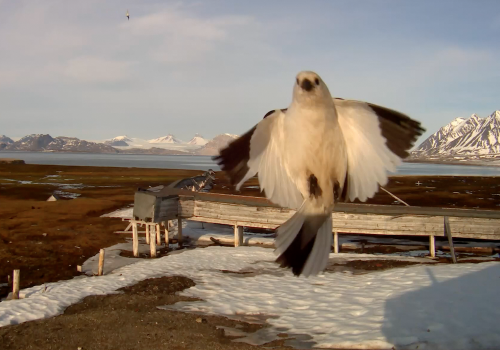 Over the years they have accumulated a collection of 178 short videos made from 2014 to 2016, which are all moments where actions took place in front of the camera: the flight of a bird, snow flurries lifted by the wind, the human presence that can be felt with the rays of light, from the headlights of the vehicles of the station. Since their meeting in 2001, the joint work of Magali Daniaux & Cédric Pigot has been marked by the double seal of experimentation and performance. Their pieces mix diverse media and combine opposing registers with a predilection for correspondences between science fiction and documentary, advanced engineering and fantasy tales, heavy materials and fleeting sensations.

To the installations and objects, drawings and collages of their beginnings were progressively added more immaterial experiments and artistic gestures. Videos, sound creations, music, poetry, olfactory research, virtual works on the borders of digital art have formed a cycle of works dedicated to the Arctic expanses and which address issues related to climate change, economic, political and geostrategic issues, urban development and food resource management. They are currently working in Alaska on projects dedicated to archaeology and global warming. Their work has notably been shown at the Musée du Jeu de Paume in Paris in 2014, the Venice Architecture Biennale in 2014, Barents Spektakel in Norway, in 2013, the Oslo Opera House for the Ultima Festival in 2011, the Palais de Tokyo in Paris in 2011, the Qui Vive International Bienniale in Moscow in 2010. They were residents at the Cité Siam in Bangkok in 2005 and at Dar Batha in Fez, Morocco in 2013, at the Schloss Solitude Academy in Stuttgart in 2015 and 2016.

Magali Daniaux & Cédric Pigot were finalists for the COAL Art and Environment Award 2010.