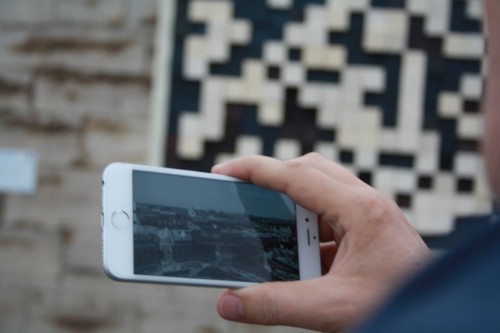 Urban DataScape is an interactive multimedia installation to immerse Parisians in the heart of climate issues. Designed for the Berges de Seine, this work inaugurates the launch of ArtCOP21, a year-long cultural event on climate change leading up to COP21, and presented at the Grand Palais from December 4 to 10, 2015.

Invited by COAL to invest the Berges de Seine, the artist Olga Kisseleva has imagined Urban DataScape to connect walkers to their urban environment and reveal the collective and systemic dimension of climate-related issues. The work was developed specifically for ArtCOP21 in collaboration with the architect Etienne Delprat, the Art&Science laboratory of the Sorbonne, the Agence Parisienne du Climat and Météo France, Eau de Paris, ERDF and APUR.

Urban DataScape consists of a playful installation in the form of a monumental QRCode, which once flashed offers walkers the possibilitý to travel through an enriched digital landscape connected to historical, economic, political, cultural, and social data related to climate in the world and in their immediate environment. The walker is also invited to participate in an interactive game that confronts him with his own interactions with the climate.

A critical look at the use of technology, Urban DataScape also proposes a non-market re-appropriation of the QR-Code to encourage citizen mobilization and participation in the great climate challenge through the potential of digital technology. 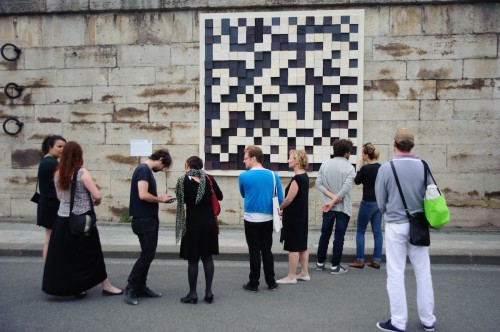 The first meeting of ArtCOP21, the Paris Climate 2015 Cultural Agenda

The inauguration of Urban DataScape is the first event of ArtCOP21, a cultural event organized by COAL and CAPE FAREWELL – the first two European actors to mobilize artists and cultural actors on climate issues – for the 21st United Nations Climate Change Conference, which will be held in Paris from November 30th to December 11th 2015.

ArtCOP21 is labeled COP21 – Paris Climat 2015 by the General Secretariat of the COP21 and the City of Paris. ArtCOP21 is supported by the European Union, the Ministry of Ecology, Sustainable Development and Energy, the Ministry of Culture and Communication, ADEME and the Île de France Region. 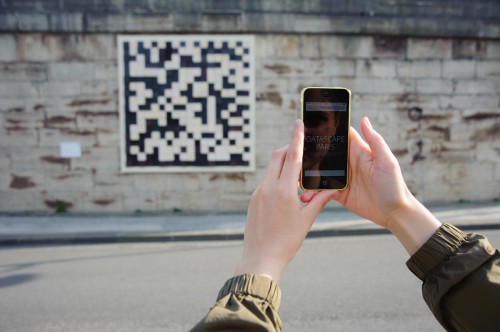 Olga Kisseleva is an artist and founder of the Art&Science laboratory, playing a pioneering role in the field of contemporary research and reflection on emerging forms of creation. Olga Kisseleva’s work intertwines actions that take place in urban environments or in networks with interventions in galleries and museums. www.kisseleva.org

Étienne Delprat is an architect and artist, doctoral student in the Art & Sciences laboratory, Paris 1 Panthéon Sorbonne. He collaborates with various institutions and creators on projects at the intersection of the city, landscape, art and sustainable development.

Located on a research axis associating art with exact sciences, natural sciences, and political sciences, the research line of the laboratory proposes to develop, analyze and promote collaborative projects elaborated jointly by scientists. The research line will federate collaborative initiatives between artist-researchers and scientists who will conceive works together while simultaneously analyzing their emergence. The crossing of disciplines will take place at the level of concepts, models, methods and materials. This interdisciplinary approach will make it possible to reconstruct a reality artificially fragmented by the compartmentalization of knowledge and aims at the acquisition of transversal competencies. It aims as much to engage issues in direct relation to the art world as to open it to a wider field, that of science.
www.institut-acte.cnrs.fr/art-sciences

The APC is the operational agency for the fight against climate change and for the energy transi- tion of Paris 2020. With 90 members, the Agence Parisienne du Climat has been helping to achieve the objectives of the Paris Climate and Energy Plan since 2011.

Its strong points:
– Free and independent advice for Parisians on energy and climate issues
– An energy-climate action-tank for the actors of the Greater Paris metropolis
– Supporting change and transformation of the territory, in particular the significant contribution to the rehabilitation of the Parisian building stock
– Listening to the weak signals of societal transformations (new economic models, social and technical innovations…)
– Involvement in national and international networks to benefit from their experiences and to promote the actions of Paris, a world city

In 2015, the APC is continuing its work of information, mobilization and support on the Parisian territory, and this, in the dynamics of the International Conference Paris Climate 2015 (COP21), which will take place from November 30 to December 11, 2015 at Le Bourget.
– Advancing common understanding of energy/climate issues
– Acting to support the implementation of the Paris Climate and Energy Plan
– Mobilizing the territory