COAL accompanies the approach of artistic valorization of the Regional Natural Park of the Haut Jura, three residences and a work in the public space

In solidarity and in common, In solidum is the principle of mutual responsibility that prevails in the management of the collective, so typical of the Haut-JuraThis is where the cooperative system of the fruitières was born. A mutualization of the benefits of nature as well as of its hazards, which reminds us of our collective responsibility towards it, and of the indefectible interdependence of humans and their natural environments, and the need to act together today to protect them.

Accompanied by COAL as a cultural actor of reference for the meeting of art and ecology, the Haut-Jura Regional Nature Park launches Nature in solidumA process of artistic valorization of its territory. Through residencies and artistic commissions, the Park and its municipalities intend to address the major ecological issues in a different way that the Haut-Jura must face, such as the protection of biodiversity, the erosion of sensitive natural environments, the quality of water resources, the impacts of climate change, the implementation of renewable energies, sustainable forestry management, or local and circular economies, and collaborative and citizen lifestyles.

This artistic approach engages to become aware in a different way of the changes that the territories undergo in order to better act on their transformations, and contribute to a better conciliation of the uses within the natural environments. This program values the grandeur of nature as well as the strength of the collective and is conceived as a participative approach federating artists, communities, companies and local actors. It participates in the local social and economic life and will be able to rely on the resources, materials and know-how of the Haut-Jura, thus reinforcing the ecological awareness of the users and residents of the territory while proposing experiments and new solutions.

This program is meant to be open: it is enriched, year by year, by new calls for artistic projects in different communes of the Haut-Jura Regional Natural Park.

In 2019, three artists are welcomed in residence in the communes of Jeurre, La Pesse and Avignon-les-Saint-Claude. Uwork of art in the public space is realized in the city of MOREZ.

A collective exhibition at the Fraternelle – Maison du Peuple in Saint Claude is organized from September 26 to October 31, 2020 to show the work of the artists.

This program is designed with the financial support of the municipalities concerned, the Burgundy-Franche-Comté Region and the Leader Haut-Jura program. They benefit from the advice and the artistic follow-up of the DRAC Bourgogne-Franche-Comté and of COAL.

The artists Baptiste Carluy, Romain BarthélémyMathieu Ghezzi, Odysseas Yiannikouris and Alessandra Monarcha, selected in the framework of Nature in Solidum begin their residencies in the communes of Jeurre, La Pesse and Avignon-lès-Saint-Claude, to confront, during one year, crucial stakes of the territory such as: the pollution of the Bienne, the forest management and the energy transition.

Baptiste Carluy, in residence in the town of Jeurre around the pollution of the Bienne

Originally from the North of France, Baptiste Carluy, devotes himself to poetically restoring his daily environment through the medium of painting. During his studies at the Villa Arson in Nice, he developed artistically in the specific context of this school linked to the history of the Supports/Surfaces movement, but also by indulging in the practice of no-kill fishing, a method of fishing in which fish are systematically released without being killed. On the occasion of his artistic residency, Baptiste Carluy proposes to enter the subject through an approach that mixes his pictorial practice with the practice of fishing. By showing in his art, both what is concretely found in the waters of the Bienne – namely a pollution linked to industry and domestic waste, and a fragile fauna and flora – and the part of imagination and fantasy that they convey.

Jeurre is located at the confluence of the Bienne and Héria rivers. Since the 18th century, the Biel basin has experienced a very important industrial development which is the source of metallic and organic micropollutants discharges in the wastewater treatment plants and in the river. Other potential sources of contamination such as economic activities outside of industry, domestic discharges, agricultural activities, and former landfills contribute to the degradation of water quality. For nearly 20 years, the Haut-Jura Regional Nature Park has been working with companies in the watershed, municipalities and their inhabitants to understand and solve these pollution problems. This artistic residency aims to contribute to a better understanding and readability of this common responsibility.

Romain Barthélémy and Mathieu Ghezzi, in residence at La Pesse, on the adaptation of forest management to climate change

Born from the meeting between a sound artist and an urban planner, the Parisian duo Romain Barthélémy and Mathieu Ghezzi are interested in sound as a marker of a territory. Romain Barthélémy is a composer and sound designer, who was introduced to sound art during his studies. Trained in music composition and electroacoustics at the National University of Ireland, Maynooth and at the Conservatoire Jules Massenet, he graduated in 2013 from the ESBA TALM IRCAM Master of Sound Design. Mathieu Ghezzi is an urban planner, in charge of urban programming and consultation at the Agence Ville Ouverte, where he works on urban projects for various communities. His work allows him to intervene in multidisciplinary teams at different scales, both local and metropolitan. More information : romainbarthelemy.com

In La Pesse, the artists in residence Romain Barthélémy and Mathieu Ghezzi work on the evolution of the sound landscape of the Jura forest. Following the work of the bio-acoustician Bernie Krause and the experimental music composers of the second half of the 20th century, their research focuses on the analysis of the structure of soundscapes as well as their recomposition under the influence of various anthropic factors (forest management, tourist and economic activities, global warming…).

Since the beginning of their residency in June 2019, the two artists have met and exchanged with several actors of the Jura forest (forest rangers, managers of the regional natural park, wood craftsmen, associative and economic actors, inhabitants, artists…) and made several hours of sound recordings of the Pesserand forest environment and the activities associated with it. The two residents have also solicited the help of residents to collect more than thirty speakers of all kinds that will form the basis of a multi-channel sound installation 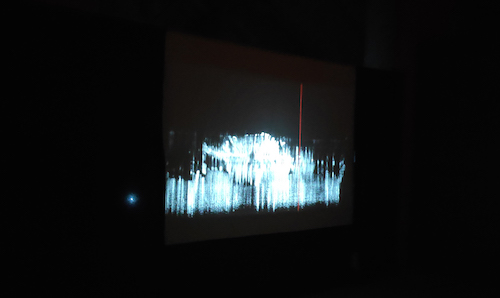 The forest occupies a central place in the Haut-Jura in general and in the commune of La Pesse in particular. The communal forests are managed according to the principle of the “planted forest” based on a very fine management of the wood harvest, called “foot to foot”. This management method is ancient and representative of the Haut-Jura forestry. It encourages a balance favorable to a very specific biodiversity. However, this management method will have to deal in the future with the potential impacts of climate change on the nature and distribution of wood species. During this residency, the artist will meet with agents of the ONF and the Park to understand and promote the art of the planted forest and the wood resources of the Haut-Jura.

Odysseas Yiannikouris and Alessandra Monarcha, in residence in Avignon-lès-Saint-Claude around the energy transition

Odysseas Yiannikouris and Alessandra Monarcha are architects, urban planners and visual artists, based in Marseille. In 2017-2018, on the occasion of Odysseas’ residency at the French Academy in Rome-Villa Medici, their collaboration is perpetuated around the invention of an approach that plays at the margins of several disciplinary fields and freely uses writing, drawing, photography, video, model and installation, as so many correlated elements of production of meaning. Their commitment to ecology is rooted in an active and emergent culture of understanding interactions. Their particular point of view is based on two themes that link them to this current of thought: the hybridity of identity, and the link between violence, politics, and Nature For more information: odysseasyiannikouris.com

Their project, theHacienda d’Avignon-lès-Saint-Claude, is therefore a solar initiative creating an artistic narrative, witnessing the local history of energy and the territory. Three dimensions particularly guided the artists’ project: energy savings, local production of renewable energies and the involvement of all to take up this immense challenge. The artists immersed themselves in the local climate by surveying the territory, talking to the Pontringus people through letters they sent, and creating different local experiences that put into play our collective relationship to energy. 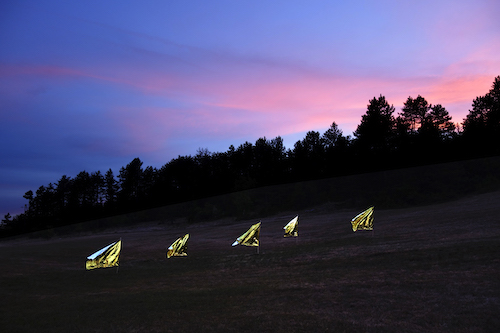 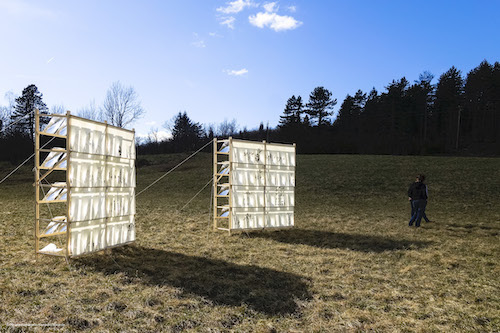 The energy transition, currently implemented by the territories, has become a major concern and an urgent necessity in view of the current climate changes. By 2050, locally, the challenges of this energy transition are twofold: a reduction in energy needs and consumption of at least 50%, and energy production from local resources, covering the remaining needs. The residence in Avignon, the sunniest commune of the Haut-Jura and strongly committed to this approach, will thus focus on the need to share the challenges of the transition in three dimensions: energy savings, local production of renewable energies and the involvement of all to meet this immense challenge.

A WORK IN THE PUBLIC SPACE IN MOREZ

Félicie d’Estienne d’Orves realizes a work in the public space of the city of Morez.

Morez, like the small towns in the middle of the mountains, is now facing the devitalization of its territory. “Cold”, “gloomy” and “recessed”, Morez offers an architectural, urban and social picture of a medium-sized mountain area negotiating its transition to an increasingly globalized economy, and less and less dependent on local resources. The sun, the light, the luminosity of the places where we live have become an essential criterion in these residential choices. The lack of light (or what is experienced as such) thus becomes a leitmotiv of the city’s policy, which carries out actions of “landscape clearing” for the benefit of neighborhoods that are less well provided with sunlight. This original policy of access to light, little taken into account in the current reflections of the energy transition, will be the center of the artistic reflection. It could be combined with the evocation of optical techniques, linked to the history of the city and its current development. 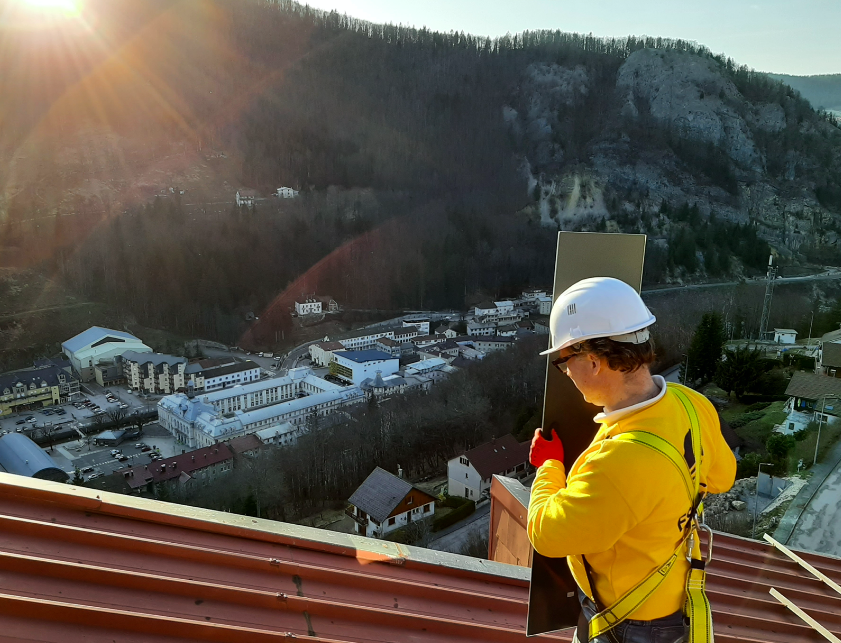