The third edition of STUWA parcours Art et Nature du Sundgau is inaugurated on June 4, 2017. Works in the villages initiate new exchanges between artists, inhabitants and visitors and become common and shared spaces, reflecting the cultural and geographical richness of the territory. With STUWA, COAL and the Sundgau make contemporary art a popular success. The third edition of this journey of works and experiences in rural areas gives it a dimension that makes it unique.

Born from the initiative of the Sundgau region in 2015, STUWA, the Sundgau Art and Nature trail, already brings together 16 works spread over a territory federating 108 municipalities. STUWA is distinguished not only by its specific participative method which associates communes, inhabitants and artists, but also by the popular success of this contemporary art approach in rural areas. The success of its attendance from the first year, the creation of works associated with the route by other actors of the territory, and the renewed will of the communes to perpetuate the presence of the works confirms the anchoring of STUWA on the territory.

Six works, selected by the municipalities under the artistic direction of COAL, explore the various facets of mobility. Thus the driving forces of nature, and especially the wind, are shown in the installation in motion Flow / For the wind of Olivier Nattes, while the Bascule (Wald) by Marion Orfila defies the laws of gravity by presenting a piece of uprooted landscape, frozen in balance on the surface of the ground. In contrast, Pauline Toyer’s Point Zero, a limestone hemicycle dug into the ground, reveals the cycle of matter and local resources, while interacting with the topography of the place.

But mobility is above all about displacement and reference to travel. Whether we are talking about past and future soft mobility, such as the futuristic vehicle Centipede of the HeHe duo, whose immobility is reminiscent of the disappearance of country trains; or that we address the burning issue of Migrationthrough the installation by the Saprophyhtes of giant nests where one would be rather tempted to look for those of the storks. Finally, mobility becomes a process with the work Jusqu’à rompre: Julien Fargetton makes a rope with the textiles given throughout his journey in the Sundgau. It is a way of reminding people that mobility is above all a vector of conviviality that allows people to bond.

A seventh work has been entrusted to the Conseil de Développement du Sundgau, which has invited Sébastien Haller, a Sundgau artist, to create an animal work for the Maison de la Nature in Altenach. 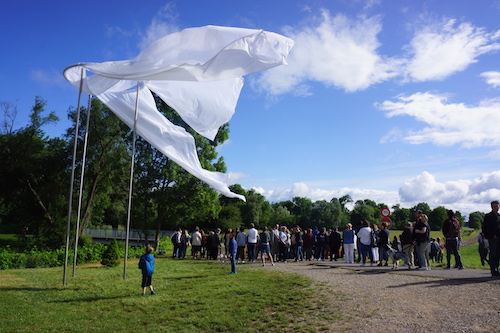 This light and airy work is both a sculpture and a device. Flux / Pour le vent constitutes a tubular shelter in which one can enter, thus cutting oneself off from the surrounding landscape. The idea is to stage two natural forces, gravity and wind, and to bring them into dialogue with each other through a form. The fabric moves under the effect of the gravity which is exerted on him and the contradictory force of the wind which opposes it. Through this poetic device, Olivier Nattes makes visible this play of forces and opposition. The resulting form is never really the same: this sculpture thus evokes the impermanent character of the elements and phenomena that surround us.

Point Zero by Pauline Toyer in Seppois-le-Haut, and exhibition of the artist in the village chapel 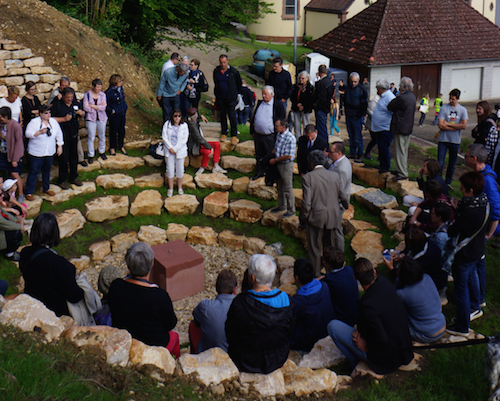 Point Zero is a point between the sky and the earth, whose subtractive form and negative volume do not clash with the fullness of the landscape. Unlike constructions that think in terms of elevation, Point Zero is a hole below the horizon. It is also a reference to the mining and stone quarries, such as the one in Durlinsdorf from which the limestone in the work comes. Quarries remind us that all construction is done by removing material from the ground. 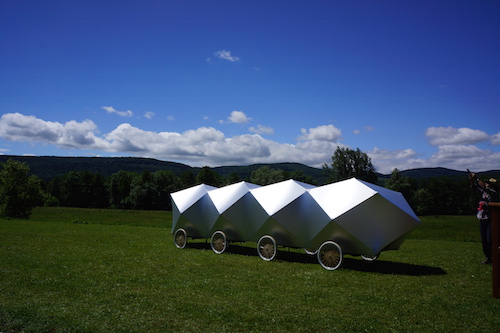 Centipede is an alternative mode of transportation, a vehicle that merges an artistic vision of social locomotion with a rural revitalization dimension linked to the history of the place. Originally planned to run on rails and transport visitors, Centipèdefollows the disappearance of the railway line between Altkirch and Ferrette. Exhibited in the public space, Centipede becomes the sculpture of a vehicle that crosses space and time. The work shapes a future reviving the past of a territory, bringing it out of a temporal immobility while reinventing a common mobility. 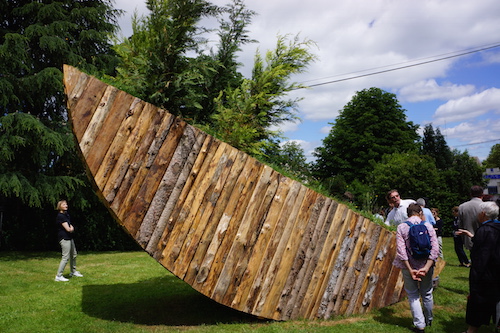 Bascule (Wald) is immobile in a position contrary to the logical distribution of the visible elements of this landscape: the grassy part sinks while the forest rises up. This leads the visitor to question the masses and forces at work, both underlying and invisible. This upside down landscape seems to lift itself, as if freed from its gravity.

Until you break by Julien Fargetton at the Maison de la Nature in Altenach, and demonstration of how to make a rope 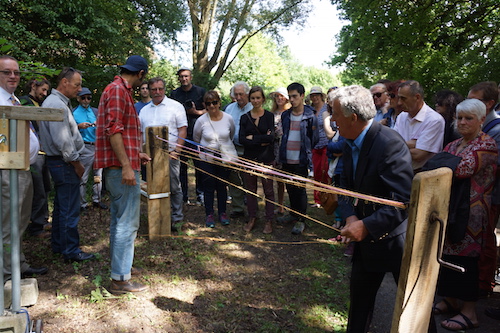 Julien Fargetton is inspired by the strong textile tradition of the region. In the 17th century, Alsatian hemp was a strategic material used to make ropes and sails for ships to control maritime routes. While the war of the chion rages in Sundgau: the ragpickers make contraband in order to resell their goods more expensive in Germany or in Switzerland for the manufacture of paper. Equipped with a trailer and rope-making equipment, he collected hemp fibers and colored fabric shreds from children in youth centers and wove them together with the children until a rope was made. 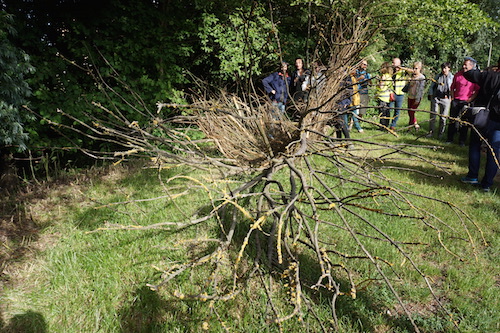 Natural object known to all, the nest is reinterpreted in an inhabited context. Beyond an echo to the specific bird species of the region, the nest is above all a reference to travel, to migration: that of birds but also that of men. The nest also embodies a habitat, a refuge, a home. It evokes an appropriate place, a comfort, the family… A paradoxical reading, therefore: between home and itinerancy, between home and migration. It evokes with sweetness and poetry the current question of a struggle: can we still migrate?

INAUGURATION OF THE STUWA ART AND NATURE TRAIL, SUNDAY JUNE 4, 2017
In the presence of the artists, COAL, sponsors and partners.

Visitors will be able to sign up for “Stuwa Circus III”, a bus tour to discover the works. Each stage will be an opportunity to meet the artists around a festive moment animated by each participating commune. The departure will be from Illfurth station at 8:30 am for a return around 7 pm.

The works in the 2017 STUWA tour are on view through 2020.
For more information: www.stuwa.fr