Call for projects for the COAL Prize 2016 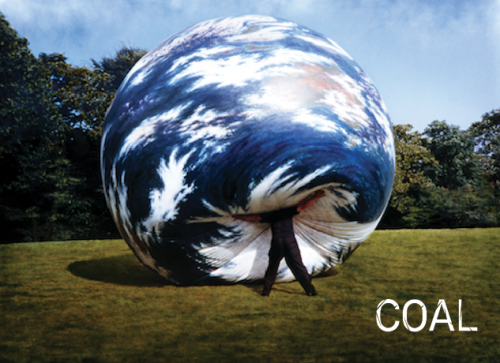 The COAL Prize wants to reveal the richness of the answers brought by the artists to the current ecological problems and to accompany the emergence of a new culture of the nature and the sustainability. The global ecological crisis, which is manifested by climate change, the erosion of biodiversity, the depletion of resources, and various forms of pollution, is above all a cultural challenge, determined by our individual and collective behavior.

The COAL Prize is addressed to artists who, throughout the world, use their creativity to imagine and experiment with solutions, to bear witness to the transformation of territories, lifestyles, organizations, and modes of production, while contributing to them. Together, they participate in building a new collective narrative, a new imaginary, a developing common heritage, a positive, optimistic and essential framework for everyone to find the motivation to implement the necessary changes towards a more sustainable world.

The COAL Prize, created in 2010 by the association COAL Art and Ecology, aims to highlight to the general public and political actors these other ways of understanding the complexity of the climate and ecological challenge through a multiplicity of views and creative alternatives. Each year, the COAL Prize honors ten projects by artists working in the field of visual arts in connection with environmental issues. They are selected through an international call for projects. One of them is awarded the COAL Prize by a jury of art and ecology personalities.

Placed under the high patronage of Minister Ségolène Royal, the 2016 COAL Prize will be awarded on October 12, during a ceremony organized in Paris at the Ministry of the Environment, Energy and the Sea, with the support of the European Union and the Imagine2020 network, the Ministry of Culture and Communication, the Museum of Hunting and Nature and the François Sommer Foundation.

The closing date for the call for projects is September 11, 2016.

The 2016 COAL Prize will be awarded in October in Paris, during a ceremony organized in partnership with the Museum of Hunting and Nature and the François Sommer Foundation, in the presence of the ten selected artists and personalities of art and sustainable development.

The winner of the 2016 COAL Prize receives a 5000 euro grant and a residence at the Domaine de Belval (Ardennes), property of the François Sommer Foundation, along with additional financial support for production.

The François Sommer Foundation is partnering with COAL to provide the 2016 COAL Prize with a unique artistic creation residency at the Domaine de Belval, along with financial support for the production.

The François Sommer Foundation, recognized as a public utility since its creation on November 30, 1966, was created by François and Jacqueline Sommer, pioneers in the implementation of a humanist ecology. Faithful to the commitments of its founders, it works for the protection of a biodiversity where man finds his rightful place, for the respectful use of nature’s resources and the sharing of the wealth of natural, artistic and cultural heritage.

The domain of Belval is located in the commune of Belval-Bois-des-Dames. With a surface area of 600 hectares, it is essentially forested and covered with meadows and 40 hectares of ponds. A true observatory of rurality and wildlife, it welcomes each year artists selected for their contribution to the renewal of the vision of the relationship between man and his natural environment. The Foundation’s commitment to supporting contemporary artistic creation is demonstrated by the fact that the residence at the Domaine de Belval contributes to the dissemination of the artists’ works to a wide audience. It also puts at the service of the creation a network of complementary skills carried by the scientific and educational teams of the Museum of Hunting and Nature and those of the Belval estate.

Download the charter of the residence at the Domaine de Belval

JURY AND SELECTION COMMITTEE BEING FORMED

Placed under the honorary presidency of Mrs. Ségolène Royal, Minister of the Environment, Energy and the Sea, in charge of international relations on the Climate, the jury is composed of personalities of art, ecology and research:

The selection criteria of the projects take into account the artistic value, the relevance (understanding of the stakes), the originality (capacity to propose new approaches, themes or angles of view), the pedagogy (capacity to pass on a message, to raise awareness), the social and participative approach (commitment, testimony, efficiency, societal dynamics), the eco-design and the feasibility

The 2016 COAL Award selection committee welcomes this year Raphaël Abrille, General Secretary of the Museum of Hunting and Nature.

The COAL Prize supports artistic projects in progress or to come. Its endowment is not intended to cover the totality of the production costs of the project and must be considered as an aid to its development.

– The completed application form, to be downloaded Application-COAL2016 Award
-A synthetic and illustrated description of the proposed project presenting its artistic dimension and its perspective with the environmental subject;
– Two high definition visuals illustrating the project
-A note on the technical characteristics of the project, particularly in terms of infrastructure and means of production;
-Budget estimate;
-A Curriculum Vitae and an artistic file.

All proposals must be submitted on the Coal server by midnight on September 11, 2016.

By participating in this call, the authors of the projects expressly authorize COAL to publish, reproduce and publicly distribute all or part of the elements of their project, for all purposes related to the promotion and communication of the COAL Prize, on all supports, by all media, in all countries. The projects submitted and not selected will remain in the archives of the COAL association. They remain nevertheless the property of their authors. Participation in this call for projects implies full acceptance of the above conditions.

For any additional request please write to: contact@projetcoal.fr

Jérôme Sans, curator, critic and director of contemporary art institutions, co-director of the Grand Paris Express
Claude d’Anthenaise, Director of the Museum of Hunting and Nature
Paul Marie Grangeon, collector and director of the general inspection of the ADEME (Agency for the Environment and Energy Management)
We are also awaiting confirmations from :
Roxana Azimi, journalist and art critic for the Quotidien de l’art
Vinciane Despret, philosopher
Gilles Bœuf, French biologist, professor at the Pierre-et-Marie-Curie University (UPMC, Paris VI), and president of the National Museum of Natural History from 2009 to 2015.