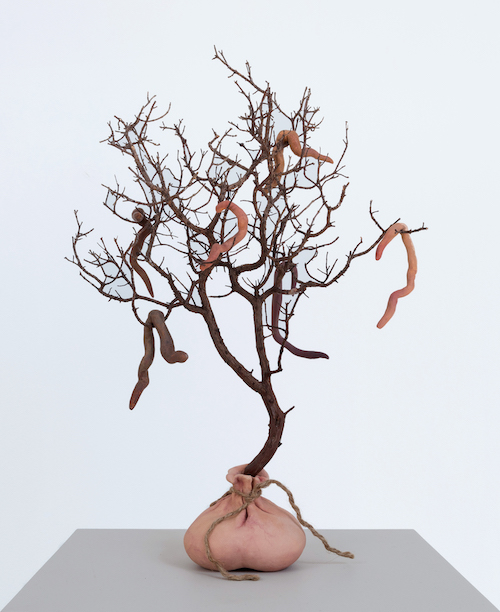 As part of the COAL 2020 Award, ten artists’ projects have been nominated as finalists for this eleventh edition. Each day, we offer you a meeting with one of the nominated projects, until the winner is announced.

Anthony Duchêne was born in 1976 in Montpellier, France. He lives and works in Marseille, France.

Anthony Duchêne is a visual artist, graduated from the École supérieure des Beaux-arts de Marseille in 2006. He develops a work of sculpture, drawing and objects inspired by the functioning of nature and the animal world. Intertwining the universe of gustatory and olfactory sensations, his creations evoke figures of hybridizations and mutations of plant and animal species inspiring him to create new combinations. In 2012, he received the Science Po prize for contemporary art for his work “Empyreume”, a sculpture proposing a truncated wine tasting around the family of empyreumatic aromas. More recently, fascinated by living wines, he got closer to farmer-winemakers to study the functioning of the soil, the balance of nature and biodiversity.

PROJECT NOMINATED FOR THE COAL 2020 AWARD : I GRASS THE WORLD

Maintaining, preserving and developing the balance of nature and refusing all chemical inputs, such is the common will of a few winegrowers and farmers who oppose the diktats of modern agriculture. It is with them that Anthony Duchêne has been collaborating for three years for J’enherbe le monde. With their help, he creates plastic works but also installations in their vineyards in order to make visible and tangible their role in the preservation and development of biodiversity.

Anthony Duchêne’s approach is based on scientific studies, farming know-how and experimentation: At Domaine Ledogar (Corbières), he uses sound diffusion to stimulate the immune system and naturally treat the vines against fungus attacks without resorting to chemicals; at Domaine Léon Barral (Faugères), he creates a work that can welcome and retain bats, which in turn can naturally fertilize the soil; At Domaine Sicus (Southern Catalonia), he proposes to make wine-making amphorae out of clay from the land itself, in order to produce a typically endemic wine and to put an end to the exploitation of oak trees to make barrels.

These are the exchanges, research and observations carried out with the winegrowers that inform and feed the whole project which, in the long run, aims to share, in the form of a documentary, the methods used by these farmer-winemakers and to transmit the values of a polyculture respectful of the living.

Describe your current environment, how do you live this covid-19 era? How does this situation influence your artistic process?

The confinement of the Covid-19 did not change my way of working nor did it stifle my approach. For practical reasons, I have simply privileged research and reflection to the plastic realization.

The first sensitive relationship with living beings was revealed by a strong interest in the animal world. Interested by the form but also by the way of life of the animal species, I started to develop a hybrid work by inserting gradually other fields of the living which are the vegetable and mineral world.

How was your project born?

Passionate about wine and the history of cooking in general, I have oriented my research towards the practices of the Peasant-Winegrowers who favour the respect of the soils while tirelessly seeking to perfect their knowledge of the functioning and balance of nature.

How do you implement artistic approaches in an agricultural environment?

I grass up the world was born after two years of observation; travelling through the vineyards across Europe, in contact with the field and its actors, I nourished and developed this approach by relying on the atypical and precursory techniques of these Peasant-Winegrowers; by proposing to them a form of collaboration consisting in realizing works implanted on their plots. They have a real role to play in biodiversity.

How do you articulate your scientific and vinicultural knowledge with the playful and plastic imagination of your works?

I first articulate all these themes around the notion of language, and then compose a work of hybridization through sculpture and drawing.

There has always been a playful and imaginary form in my work, certainly due to the influence of Belgian artists. But also a medieval inspiration, since this period and its representation are marked by rurality; aspect that I wish to defend in my aesthetic approach, attentive to the values of ancestral practices which tend to return.

On a personal level, and in line with my approach, I favor products from responsible and environmentally friendly cultures, especially in the animal sector. Also I defend and support the locavore system which tends to return to agro-sylvo-pastoralism. Obviously, the defense and consumption of live wines.