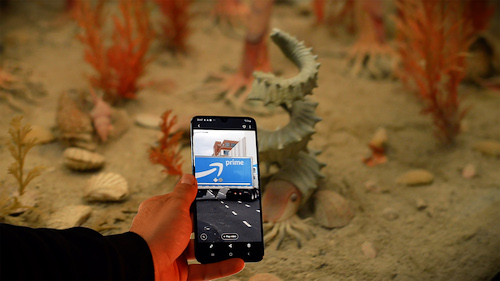 Ioannis Koliopoulos and Paola Palavidi were born in 1986 in Athens, Greece. They live and work in Athens and Tinos, Greece.

Hypercomf is a speculative design collective, taking the form of a fictional company, created in 2017 by artists Ioannis Koliopoulos and Paola Palavidi. Through focused collaborations with musicians, filmmakers and local communities, their projects focus on the interaction between people, nature and technology. They are particularly interested in the networks of organic and digital ecosystems, the human-machine duality, and the psychosomatic impact of the means and comforts of our ever-changing technological age. Recipients of grants (Fulbright, Greece), and residencies (Pioneer Works, New York), they have exhibited in Greece and internationally: 7th Thessaloniki Biennial (Greece), Heat Company (Brussels), First Draft (Sydney).

PROJECT NOMINATED FOR THE COAL 2020 AWARD: CENTER FOR STUDIES OF OCEAN FLOOR AS CEILING

Largely unexplored, the ecosystems of the deep sea and the ocean floor are home to between 1.7 and 2.3 million species that are still unknown. Composed of both large organisms and multi-species microbial collectives such as microalgae or plankton, the ocean plays an essential role in the balance of the entire planetary system and could reveal the mysteries of the origin of life.

To address the issue of marine plastics that threaten this ecosystem today and deal with the issue of responsibility for pollution of international waters, Greek artists Ioannis Koliopoulos and Paola Palavidi, united in the collective Hypercomf, imagined a fictional company: the Center for studies of Ocean Floor as Ceiling. In the form of an imaginary story, their project promotes inventive, creative and functional solutions for the reuse of plastic pollutants from beach cleanups.

An installation will offer an immersive tour of the company’s fictional office, entirely decorated with 3D printed objects made from ocean plastic filaments and a fossilized plastic terrazzo. A promotional video from the company will take the perspective of an ROV (Remotely Operated Underwater Vehicle) in the deep sea, scraping the ground with its robotic claws to collect samples from the seafloor, revealing the interdependence between life and technology, and highlighting the impacts of human exploitation on living things.

Fundamentally participatory, the project relies on educational activities, events, workshops to promote a circular production system based on the reuse of synthetic materials and the union of maritime communities in the preservation of marine ecosystems.

Describe your current environment, how do you live this covid-19 era? Does this influence your artistic practice?

After a six-month residency at the Pionner Works Center in Brooklyn, we went into complete isolation at home on the island of Tinos in the Cyclades. The daily life of the people here has not changed much since they live mainly from small-scale agriculture. But the lack of economic and human transport links to the mainland has accentuated problems that were already present. It goes without saying that Greeks are somewhat disillusioned with economic crises, the country has been in them for more than a decade, and our generation has never experienced a period without them. We toughened up a bit and found ways to stay positive without losing sight of our motivation, no matter what. Working and surviving as an artist was already very difficult, now it is hanging by a thread. But perhaps it is through the arts that we will be able to regain confidence in a social life? It’s too early to tell, but we remain optimistic: we are all affected by the situation and it will bring us even closer together.

Can you tell us about an event that changed your relationship with nature and biodiversity?

About ten years ago, we moved from our apartment in one of the most densely populated areas of Athens to a village of 200 inhabitants on a small island in the Aegean Sea. This move was motivated by the persistent crisis of the Greek economy and our passion for plants: we were running a tiny plantation on our sunburned Athenian balcony and were passionate about alternative food production. Today, we farm the land and live in a wild landscape to explore. The search for herbs, greens, mushrooms, fruits, etc. and above all the beekeeping activity have become an important part of our life. We wanted to understand the networks, the natural processes that ensure a healthy and diverse ecosystem. So, we too have been rooted, buried, pollinated, and invaded by vegetation: the ceaseless movement of various organisms, all linked by the cycle of life and death, has made us want to be part of this network, by being more aware of it.

How did you become interested in ocean pollution and international maritime law?

The Aegean Sea is crossed by ships of all types, nationalities and sizes. The coastline we are looking at is hit hard by the northern winds that blow across the landscape unimpeded for miles. The quantity and variety of pollutants that end up on these 300 meters of sand are staggering. When you walk on the beach on a windy day, it’s a bit like reading the newspaper of humanity: depending on the political news and events, there are different types of garbage, in all languages, to clean up on the beaches. The biggest waste usually washes up in the form of plastic filaments and multicolored confetti. While trying to clean up the shoreline, we collect finds. Over the years, it became clear that the marine biodiversity in the area was decreasing, and that human activities were the primary cause.

The observation of this situation led us to research and experimentation on materials that inspired the project “Center for Studies of Ocean Floor as Ceiling”. We wanted to focus on the study of the ocean floor, these unexplored places, which harbor life, full of unknowns and problems that we are discovering little by little thanks to space exploration technologies. From a human perspective, the depths also symbolize weightlessness, a darkness and a glow as if from the womb, a spiritual connection between our species and the water. These depths of the sea so strange, enigmatic and unwelcoming to life are in fact the origin of life itself.

The deep seabed is an area of booming industrial activity: from internet cables to mining, many routes and locations are located on the seabed in the heart of international waters. Scientific research suggests that the ocean floor is much more polluted than the surface of the oceans, particularly because of the deposition of waste and the “marine snow” formed by micro-plastics that sink into the depths. Our waste would be fossilized in this sedimentary library, like the archives of a day in the life of the Men of today.

You are a collective. How do you see the participatory dimension and the collaboration with the inhabitants of the coastal areas in particular, which play an important role in your work?

Our project will make use of a large amount of collected marine plastic waste. This is one of the steps in which we will engage communities through public pick-ups and a call for participation. Sideways waste collection functions as a “citizen science” of observation and diagnosis. For example, by reporting data on marine organisms, large garbage, and garbage with ownership markings, we can help prove illegal fishing practices or dumping by commercial vessels.

Our collaboration “Hypercomf” was founded as an artistic identity, that of a self-proclaimed pseudo company. It is a deliberately abstract entity that we use as a vehicle to seek anonymity, a poetic license with which to analyze corporate practices and tactics, a platform for collaboration with other artists. “Hypercomf” is a contraction of the terms “hyper” and “comfortable”.

What is your environmental commitment as artists and citizens?

From the very beginning, we have placed importance on the process of sourcing our materials. We mainly use abandoned objects, used clothes, reuse upholstery, industrial waste, second hand objects already steeped in history. We seek to add conceptual value to these abandoned objects through poetic design. Much of our work to date has focused on fabric, because in addition to being an incredibly tactile, versatile, beautiful, lightweight, easy to carry, and familiar material, fabric is also enormously wasteful when produced irresponsibly. A lot of time and social interaction goes into the sourcing of materials, for the collection of objects or for sourcing leftovers from production lines.

One of our most recent projects was to produce an experimental documentary on the interactions between humans, animals and natural organisms in the urban ecosystem. We have studied and documented these interactions in the New York City metropolis and found the emergence of an “urbanophilic” ecosystem maintained by human dietary excesses. It was a project that brought us into contact with many different people, and to collect their experience of nature in the city. Before that, during a project in Italy, we documented a very different connection to the living: in a small town in the foothills of the Dolomite Mountains, shepherds watch over a protected local breed of sheep throughout the year, and sell their wool in town to a small family who works it in a historic woolen mill. We always try to understand the communities and ecosystems in which we work as best we can, to reflect their characteristic interactions.

Humans will, no doubt, continue their technological and industrial development, and we hope that they do so having learned from the past. Conserving the health and biodiversity of our planet is essential. Perhaps mechanics and nature will merge to create an augmented, artificial ecosystem, with the automation of many tasks; perhaps buildings will be designed as ecosystems in their own right… It’s impossible to predict, but it’s interesting to develop hypotheses. The most positive scenario would be for us to figure out how to make the best use of our new technological powers and connectivity, and for us to define new systems of collaboration and behavior together as a unified species, regardless of nationalities or circumstances. In this way we can reduce the activities of our species that negatively affect the existence of other organisms on the planet.