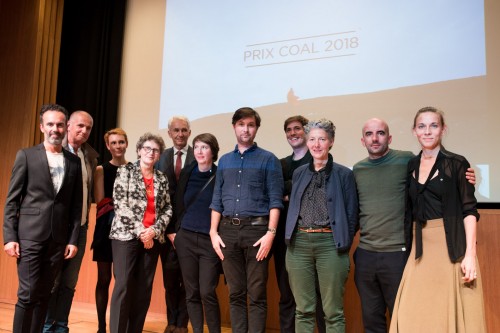 The 2018 COAL Art and Environment Award yesterday recognized artist Jacques Lœuille for his project The Birds of America. The winner was selected by a jury of personalities of contemporary art and ecology among ten nominated artists, at the Museum of Hunting and Nature. A Special COAL Prize supported by the François Sommer Foundation and the Ministry of Culture was also awarded to Martine Feipel & Jean Bechameil for their project Cité d’Urgences – Apus Apus.

These two winning projects, very different and complementary in their approaches, address the crucial issue of the sixth mass extinction crisis of biodiversity and in particular the disappearance of birds at an inconceivable rate: in only fifteen years, a third of the birds in the French countryside have disappeared.

The 2018 COAL Award was presented at the Museum of Hunting and Nature, during a ceremony that also celebrated COAL’s 10th anniversary. 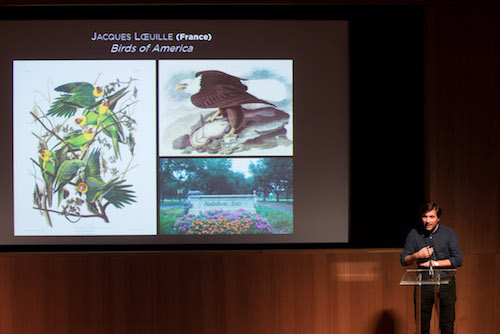 A graduate of the École des Beaux-arts de Nantes, the Mel Hoppenheim School of Cinema at Concordia University in Montreal, and the post-graduate program at the Beaux-arts de Lyon, Jacques Lœuille joined the Fresnoy – Studio national des arts contemporains in 2009, from which he graduated with honors in 2011. Since then, he has produced video installations that have been exhibited in galleries, art events, art centers and museums. In 2017, he directed La Peseuse d’or-anessay on the emergence of capitalism in 17th century Dutch painting-which won the Best Film Award at the Angoulême Francophone Film Festival and was acquired by the Neuflize Foundation’s contemporary art collection.

In parallel, he directs documentaries on art for Arte and France Télévisions and is currently finishing the documentary film Threats in the North Sea which traces the political history and questions the health and environmental consequences of the dumping of chemical and conventional weapons in the North Sea and the Baltic during the two world wars. In 2017, he participated in the 62nd Salon de Montrouge for the promotion of young contemporary artists. Jacques Lœuille was born in 1983 in Chambray-les-Tours, France. He lives and works in Paris.

His project The Birds of America questions the symbolic and real impact that mass extinctions and environmental degradation have on the political makeup of countries, and on our way of life. Starting from the idea that the birds of America are a national cement, wouldn’t the United States then forge an image in the ghostly reflection of its former Eden? These are the hypotheses that the author of The Birds of America is working on. In reference to the work of the French naturalist painter and father of American ecology John James Audubon, Jacques Lœuille creates an installation made up of seven films, each dedicated to a bird that has disappeared from the territory, in order to reveal a political counter-history of the United States. Americans have built a veritable mythology around birds, especially the most famous of them, the Bald Eagle. Recognized as the emblem of the nation, this diurnal bird of prey has become scarce with the industrialization of the country. Its survival today depends on a federal grant and protection program. As for the American migratory pigeon, it has completely disappeared, victim of the cult of firearms, or the Trétras, which became extinct in 2012, driven from its prairies by gas exploitation. What is particularly poignant here, as we are subjected to fake news and manipulation of scientific information of all kinds, is that these extinct birds are also the subjects of a veritable phantasmagoria: falsified or imaginary images and stories, false testimonies, confusion of species, photomontages and optical tricks… This aesthetic of the fake, through these falsified or erroneous images of bird watcher, will be present in the installation and will dialogue with the paintings of Audubon. The “high definition” of Audubon’s images and the low definition of today’s bird images contrast, highlighting the vanity of technology, which in its hyperactivity no longer knows how to preserve anything.

The winner of the 2018 COAL Art and Environment Prize receives an endowment of 5,000 euros and a residency at the Domaine de Belval, property of the François Sommer Foundation, with additional financial support for production. 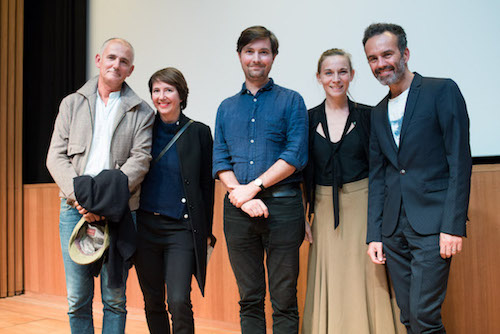 Martine Feipel & Jean Bechameil have been working together since 2008. Martine Feipel studied art at the University of the Arts in Berlin and at Central Saint Martins College of Art and Design in London. Jean Bechameil studied at the Beaux-Arts de Paris and the Willem de Kooning Academy in Rotterdam. He has worked on various stage and film designs, and helped create the sets for several Lars von Trier films. The work of Martine Feipel and Jean Bechameil questions our perception of space in a general way. They were selected in 2011 to represent Luxembourg at the 54th Venice Biennale. Since then, they have been invited to numerous international exhibitions, notably at the Kunstmuseum Bonn, the Pavillon de l’Arsenal in Paris and the Beaufort Triennial in Belgium. In 2017, the Casino Forum d’art contemporain Luxembourg devoted a monographic exhibition to them.

With Cities of Emergency, Feipel and Bechameil seek to implement a series of projects to provide species threatened by the depletion or destruction of their natural habitat with dedicated housing. Urban sprawl and the densification of rural areas around urban areas are now endangering the lives of many plant and animal species.

As tourism rages on and people move around more than ever before, less and less space is left for migratory animals and nomadic species. They are however the symbol of this freedom to move according to the seasons, which they announce by their comings and goings. Isn’t the flight, the shrill cries, the incessant chasing of swifts one of the joys of early summer? This bird has indeed evolved alongside humans, becoming accustomed over the centuries to using the crevices of the stone and mortar walls of houses to establish its nests. But contemporary architecture and its dream of perfection and functionality have eliminated all sorts of cracks and gaps from our buildings, leaving only smooth surfaces unsuitable for nesting.

Feipel and Bechameil, artists of the relationship to the body in architecture, of large housing estates, of the habitat and of the inhabitant, propose, in a rural region where the species has almost disappeared, to show that it is possible, by starting from the existing building and working in the long term, to gather the conditions of a return of this migratory bird. Establishing a multidisciplinary collaboration with scientists and the inhabitants themselves, they will develop new crevices in existing walls, thought as works of art in their own right.

This special prize is endowed with a residence at the Domaine de Belval, property of the François Sommer Foundation and financial support from the Ministry of Culture. 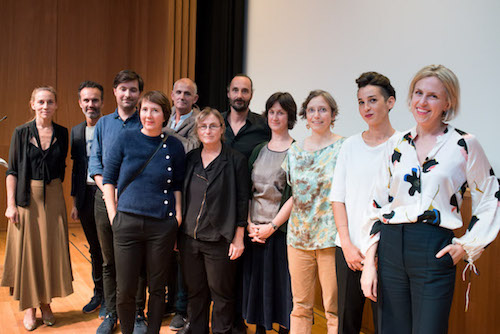 The ten artists nominated for the 2018 COAL Art and Environment Award were:-

Discover all the projects in the
COAL Prize 2018 Catalogue 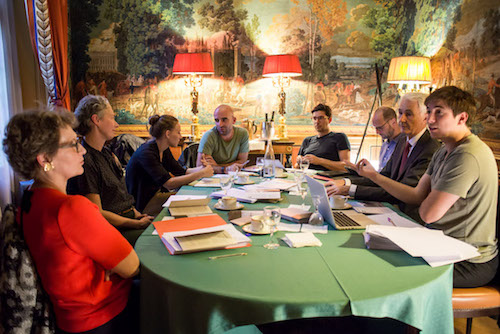 The COAL Prize has become the international meeting place for artists who take up the main universal issue of our time: ecology. This year again, nearly 350 artists from 66 countries representing six continents competed in an international call for projects. Sponsored by the Ministry of Culture and the Ministry of Ecological and Solidarity Transition, the 2018 COAL Prize was awarded on October 24 to the artist Jacques Lœuille for the project The Birds of AmericaThe award was presented at a ceremony held in Paris at the Musée de la Chasse et de la Nature, with the support of the French Ministry of Culture, the European Union, the Imagine2020 network and the Musée de la Chasse et de la Nature – Fondation François Sommer.

Photographs of the COAL Award ceremony by © Julie Bourges