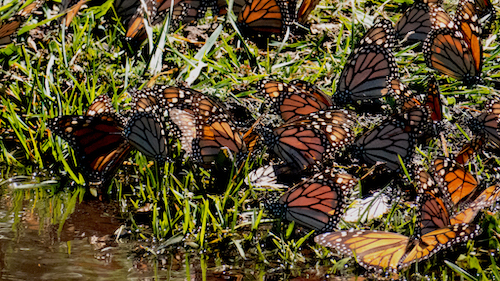 Minerva Cuevas is a conceptual artist who develops projects with strong political resonance. Socially engaged, and offering opportunities for exchange and participation, his art transgresses boundaries and encourages us to reconsider our place in the world, collectively and individually. His favorite themes are natural resources and indigenous cultures, colonialism, alternative economies, biotechnology, self-reliance and extinction. She has recently been exhibited at the Museo de la Ciudad de Mexico (Mexico City), at the Whitechapel Gallery (London). She has participated in group exhibitions at the South London Gallery (London), the Guggenheim (New York), the Musée d’art moderne de la Ville de Paris (Paris), the Centre Pompidou (Paris). Minerva Cuevas also won the Deutscher Akademischer Austauschdienst (DAAD) award.

PROJECT NOMINATED FOR THE COAL 2020 AWARD: MONARCH, THE BUTTERFLY THAT COULD TELL THE HISTORY OF THE WORLD

Mexico is one of the 17 so-called megadiverse countries that alone contain almost three quarters of the Earth’s biological diversity. Among the emblematic Mexican species that are particularly threatened is the Monarch butterfly, whose population has fallen by up to 97% in a decade. Twice a year, this migratory butterfly travels, in groups of millions of individuals, more than 4000 kilometers from Canada to hibernate in the south, mainly in central Mexico. Although it weighs less than a gram and measures only about ten centimeters, the monarch butterfly alone tells the story of our world and the collapse of all ecosystems on the American continent.

Artist Minerva Cuevas’ video installation project takes place in the heart of the Monarch Butterfly Biosphere Reserve in the state of Michoacán. Every autumn, nearly a billion of them come to color the forests of oyamel firs. The artist reveals the lesser known aspects of their ecosystem such as the decline of the Algodoncillo and Cempazúchitl flowers, also orange. Essential to pollinators, these herbaceous plants, like nearly 140 other species of the milkweed group, are now disappearing under the effect of glyphosate associated with transgenic crops in the American midwest. The artist also values the essential role of the Aboriginal communities that protect them.

For a long time, in the local Náhuatl and Purépecha traditions, it was believed that the souls of the dead traveled in the orange color of the wings of these butterflies that arrived each year in Mexico during the celebrations of the traditional Festival of the Dead. The film will be accompanied by an original score by composer Pablo Salazar.

Describe your current environment: how do you live in this era of covid-19 ?

Since all my professional trips have been cancelled, I no longer leave my studio in Mexico City. This was my apartment originally, so there’s plenty of space to live and work. The building is located in the historic center, a very lively place. So I was able to observe the streets being emptied of their commercial activities.

My studio is a beautiful space, with a large library, nice to work in, but I’m getting tired of looking at screens. Being indoors for so long, I started feeding an ever-growing number of city birds from my window.

Has this situation influenced your artistic practice ?

I have read articles that analyze the situation and the potential consequences of this crisis. It’s interesting to see the contrasts between scientific views and political approaches. Unfortunately, I am used to assessing and witnessing many other environmental and social tragedies, so I see covid-19 as part of a larger crisis.

Can you tell us about an event that changed your relationship with nature and biodiversity?

I shook hands with a monkey on a trip to Paraguay.

Apart from that, I would say that despite being born in Mexico City, I come from an indigenous family from the Mixtec region of Oaxaca, so I experienced a childhood very strongly linked to agriculture and animals but also to the communal ways of life in rural areas.

How did you come to work on the Monarch butterfly ?

This project is, and at the same time is not, about Monarch butterflies. The film focuses on those other elements of biodiversity that sustain the life and migration conditions of the Monarchs.

Michoacán is an area that has interested me for a long time, especially because of its great biodiversity which depends a lot on the lakes of the region. It is this specific ecosystem that brings the Monarchs to stop there. I have also been following Donna Haraway’s writings: she recently came to Mexico City and Michoacán to give lectures and visit the Monarque Shrine, so it was a coincidence and a great pleasure to be able to share a little with her. I think his writings about kinship are extremely relevant today. I love his perspective, which is deeply scientific and very sensitive at the same time. His book Staying with the Trouble includes a whole chapter about the politics of water in Mexico City and Michoacán, and the beautiful story of the link between peasant communities and the butterfly. This exchange led me to invest in more in-depth and specific research.

In most of your work, one can see a bitter critique of economic and political power structures, whereas in this project you are studying a specific ecosystem: does this show a renewal of your interest in the relationship with macros and micro elements?

There is nothing more important in today’s economy and global politics than depleted natural resources, be it water, forests, minerals, agriculture or oil. All the processes of colonization of nature and indigenous societies as well. I think that nowadays it is more and more evident that these spheres are linked together and cause the negative impact of extractive entities.

On the contrary, I would find the opposite really strange – not to think about politics and oppression when talking about ecology. I see my work as an intellectual and aesthetic exercise when the formal solutions and references are diverse, but everything is also linked to the research I conduct. I mean research here not only as reading documents but also as very specific exchanges with scholars and communities. It always includes diverse political positions and it always reflects the world in which we live, counting also what is not always documented.

It is ecological and not only environmental, so it is very broad. My life and my work are situated in the same space, where ethics and politics are one and the same act that governs each of my decisions, whether they are aesthetic or personal.

I often say that the future was yesterday. The future is the action, the actions that we have done yesterday and today, for me it is not an imaginary projection. We build it, we fight for it. Today, I think that this concept is particularly far from the notion of utopia, for example. The ecological crisis is so advanced that everything has become much more immediate and urgent. There is no room for utopia when we have to manage the emergency now.