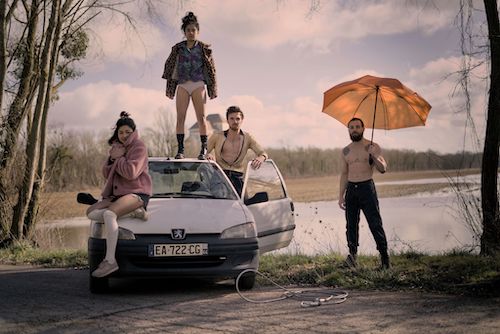 The Culture & Diversity Foundation and COAL launched in 2020 the first edition of a Prize for Ecology specifically dedicated to students of Schools in the artistic and cultural field. This multidisciplinary call for projects aims to accompany and support students in the cultural and artistic sector who imagine, experiment and propose concrete and creative solutions to contribute to the ecological transition. The Foundation Culture & Diversité and COAL wish to encourage the participation of young people and to promote the answers brought by young artists to the current ecological problems.

Convinced that through its interaction with other disciplines, art encourages exploration and innovation, the Culture & Diversity Foundation and COAL wished to address all students in the cultural and artistic sector: visual artists, filmmakers, musicians, architects, actors, curators, dancers, designers, photographers, circus artists … who are the creators, visionaries and inventors of tomorrow.

In a desire to link the theme of life to the territories, the COAL – Culture & Diversity 2020 Student Prize is associated with the Natural Reserves of France through a residency program.

” In a rapidly changing environment, the creativity and commitment of young artists bring new proposals and new narratives to the ecological transition. The Fondation Culture & Diversité is pleased to support this dynamic, which is more than ever at the heart of contemporary concerns “Éléonore de Lacharrière, General Delegate, Culture & Diversity Foundation.

For its first edition, the call for projects of the COAL – Culture & Diversity student award intended for students of the French artistic and cultural schools gathered 63 applications from 30 schools, reflecting the sensitivity of these students to ecological issues.

“Linking art and nature in the territories of the Nature Reserves of France and overseas is a challenge that we are taking up thanks to the student prize that will be welcomed this year for 2 months in residence in the Nature Reserve of La Massonne. The choice of live performance through the creation “l’Envers d’un monde” resonates for us as an ode to nature, to youth, to renewal. Crossing the views of the artist and the manager of the nature reserve to create a meaningful and emotional show is an adventure that we hope to see grow in the years to come” Charlotte Meunier, President of Réserves Naturelles de France.

L’envers d’un monde (The other side of a world ) puts into play and into movement, through a circus performance implanted in the heart of a natural space, the excess and the realism of our world, in this interstice between human freedom and that of the Earth. With this show, circus art takes up the issues of consumption and mass production, which destroy ecosystems, to overturn the strongest symbols and question it in all its aspects, material, relational, physical and emotional.

Mixing in turn, acro-dance, tight wire, manipulation of objects, maxillary suspension, this group of five international circus artists gives to see and to retranscribe a dizzying and acrobatic danger, far from the rectilinear ways of morality. The setting is that of a human zoo, located in a dystopian future but never far from the reality in which we live. By inscribing itself in a defined natural space, and by creating a contrast with it, L’envers d’un monde invites the public to approach this space from a new angle.

Around this performance, cultural actions of environmental awareness will be proposed over several days with the local population. An immersive walk, like a collective expedition, will open the journey bringing the spectators to the place of the show. This one becomes then the junction of the living: an intergenerational public, accomplice of a singular artistic form, registered in a natural space. The contrast between fiction and reality, dreams and nightmares, laughter and despair, are tools to talk about today’s world, stemming from the circus whose very essence is to be a living art, an art of reality.

How can we think about the transition of our lifestyles and our relationships with living beings without questioning the established codes and conventions? Some artistic proposals seek to implement the reversal of conceptions and conventions, others intend to create new codes and new ways of making signs.

For Erwan Tarlet, Maria-Jesus Penjean Puig, Marin Garnier, Tia Balacey and Giuseppe Germini of the National Centre for Circus Arts, it is a question of thinking
The reverse side of a world
and adaptability of life in a damaged nature. To do this, they divert the use of the car, the flagship object of the production and consumption society, and turn it into a cabin inhabited by a human zoo, through a live show situated between dream and nightmare.

The opposite of the object-machine, Maude Bayleof theNational Superior School of Art and Design of Nancy proposes to reverse the negative symbolism of invasive plants, including the Knotweed which proliferates in the East of France, transforming its biomass into a material resource, useful for the design of traditional beehives for example.

Reversing signs is also creating new ones, as conceived by Alix Lalucaa and Lisa Faure from theÉcole supérieure d’art et de design de Reims with their
Cairn Project
. In collaboration with a local granite company, they are developing a new signage system for hiking trails, based on granite cairns that fit into the landscape of the Vosges Regional Nature Park and inform and educate hikers about the biodiversity that surrounds them.

Dressing up spaces to better inhabit them or reversing their traditional use? This is the question asked by Thomas Cany and Clara Hubert, from theÉcole supérieure d’art dramatique du théâtre national de Strasbourg, through their project
Me Alive.e
. This one constitutes a theatrical laboratory which aims to invest certain places to make new atypical scenic spaces. This can take the form of a staging in a container or, on the contrary, in a nature reserve, with eco-designed devices close to the movements of nature, so that the etymology of the theater, “place from which one sees”, resonates with the direct observation of nature.

The Culture & Diversity Foundation grants the winner a 2-month residency in the Nature Reserves of France, along with a production grant of 5,000 euros. Within the framework of the residency, the Fondation Culture & Diversité covers accommodation, per diem and transportation.

The COAL associationcreated in France in 2008 by professionals of contemporary art, ecology and research, mobilizes artists and cultural actors on societal and environmental issues and supports the essential role of creation and culture in raising awareness and implementing concrete solutions. Through the COAL Prize, the COAL Student Prize – Culture & Diversity, international cooperation actions and more than fifty exhibitions and cultural projects in the territory, COAL is the first French actor to promote the emergence of a new culture of ecology.