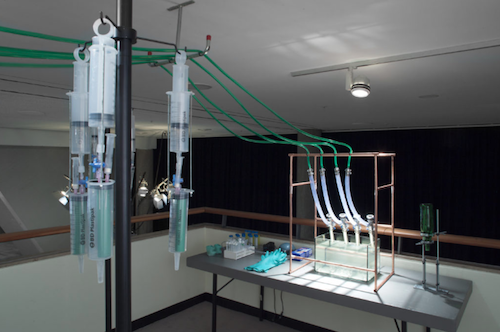 Various researches and experiments were carried out within the framework of the artists’ collective Aliens in Green, by the artists Bureau d’études, Ewen Chardronnet, Spela Petric and Mary Tsang in order to set up a performed installation at the intersection of the analysis laboratory, the observatory of controversies and the board game. For the Laboratory of Sustainable Culture (COAL-LADYSS), Aliens in green focuses more specifically on the relationship between food and toxicity.

This project, which was conceptualized during a Dicream Development, focuses on a complex, entangled, networked object: endocrine disruptors. Endocrine disruptors concern us intimately: they are present in our blood and pass through human and non-human bodies through those great semiotic circuits that are the hormonal systems. Endocrine disruptors bring into play health (toxicities) and societal issues (pharmacopornographic and eco-hetero-normative regimes (Preciado, Di Chiro). But also industrial and geopolitical issues (industrial mergers between agro-, petro- and pharma-chemical groups, China/US chemical alliances, etc.).

For the Sustainable Culture Laboratory, the team is interested in toxicity in food and more specifically in the existence of endocrine disruptors, and anti-toxic dietary responses. The artists imagine the forms that a relational sculpture could take, which would allow the public or participants in a workshop or a performance to take positions on the issue of endocrine disruptors, to build alliances between actors, to recognize the lines of conflict and controversy between the fields of scientific research and the subjectivities, political, societal and cultural issues associated. 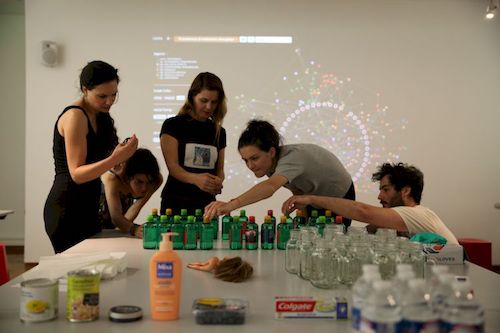 Meetings and workshops are organized throughout the project:

– Open Source Body Festival, la Gaîté Lyrique
A serious game on the politics of petro, agro and pharma toxicities affecting human and non-human actors involved in the global endocrine cycle has been set up, as well as various interviews about the relationships to everyday toxicities.

– Festival We are not the number we think we are, Cité internationale des Arts
Aliens in Green intervened in the framework of the Arts & Sciences Chair festival with a set of performances, projections, laboratories, meetings, conferences and tastings around endocrine disruptors. 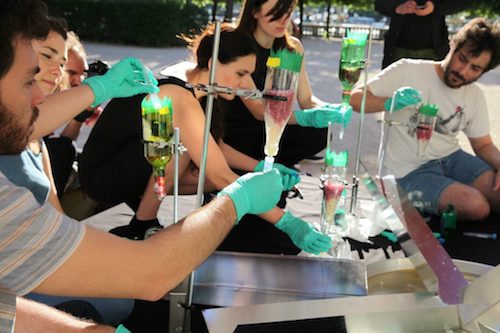 The Aliens in Green are a mobile investigative laboratory and tactical theater group that conducts research on alien agents of anthropocene xenopower. The laboratory implements intermedia processes that bring together open science, DIY practices, serious games, speculative narration, cultural intelligence and science fiction, in order to open a critical public space. The action carried out can therefore be understood as being both symmetrical and antagonistic to that of the “Men In Black”. They act as discursive agents that deal with human relations with third type life forms. Unlike the “Men In Black” who operate in secrecy, the Aliens In Green act openly to allow Earthlings to identify the collusion between capitalism and xenopolitical interests.

The Sustainable Culture Laboratory is supported by the Ministry of Ecological Transition and Solidarity, as part of the National Climate Change Adaptation Plan, the Ministry of Culture, the European Union’s Creative Europe program, the Imagine2020 network, the Carasso Foundation, and DiCRÉAM. It also involves many cultural partners and research institutes: the LADYSS, the ENS Paris, the ENS Lyon and the INRA.