Changing Era: The Sciences and Arts of the Anthropocene 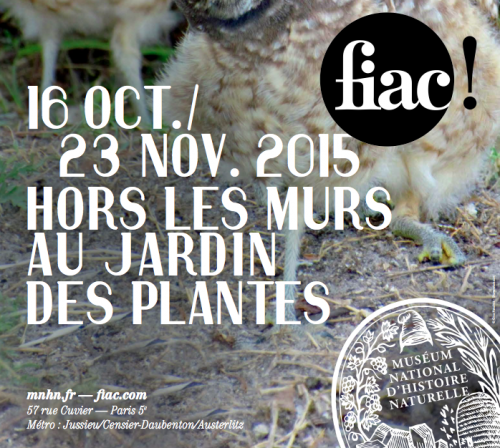 The FIAC Hors les murs joins COAL and the MNHN to organize a series of lectures on Art and Science as part of its journey of works around the sciences of Nature presented at the Jardin des Plantes and the National Museum of Natural History.

For the fourth consecutive year, COAL organizes and animates this conference cycle, around the theme Change of era: sciences and arts of the anthropocene. Three round tables propose a dialogue between an artist, a scientist from the Museum and a thinker around the interactions between art, science and commitment.

In the city as well as at the bottom of the oceans, our organizations impact nature in the most direct way, through the occupation of the territory, to the most insidious and distant way, through our pollution. How to live on Earth today?

Far from the vision of the exceptional and rare “beautiful nature”, ecology shows us how crucial the common biodiversity is. This revaluation of the banal does not fail to clash with our old value systems.

KEEPING YOUR FEET ON THE GROUND, Saturday, October 24, 6pm – 8pm
Bulles d’air MeetCOP21 on the banks of the Seine, between the Pont de la Concorde and the Passerelle L.S.Senghor, 75007 Paris

The very notion of the Anthropocene, the age of man, is based on the observation that humanity has an impact on the geology of the planet. Soil, as a support for living organisms, is becoming a major issue, yet it is little valued in our representations.

With the participation of :
Bruno Latour, sociologist, anthropologist and philosopher of science
Eva Moreno, geochemist and paleoclimatologist
Otobong Nkanga, artist