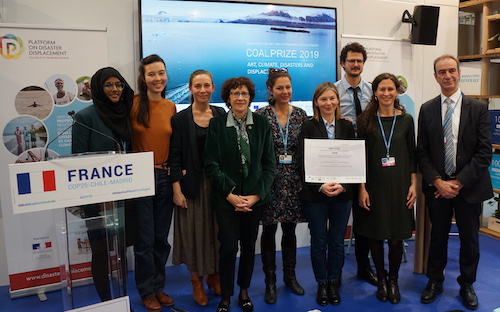 Madrid, Spain, December 4, 2019 – At the heart of the United Nations Climate Change Conference (COP25), French Climate Ambassador Brigitte Collet today presented the 2019 Coalition for Art and Sustainability (COAL) Art Prize to artists Lena Dobrowolska and Teo Ormond-Skeaping for their project You never know, one day you too may become a refugee . This year in its special edition, the COAL Prize 2019 focused on the issue of climate, disasters and displacement.

” Climate change is unfortunately no longer a distant and theoretical concept but a terrible reality. We believe it is essential that the art world be able to participate in our mobilization and awareness-raising efforts and that artists be able to express their talent and put it to use on themes that are absolutely crucial for the future of our planet. Beyond the negotiations which are often very technical and disembodied, the artists’ works lead us further in our perception and in our reflection and I really want to thank them for that, “said the Ambassador in her speech on the French Pavilion.

Since 2009, it is estimated that every second a person is displaced by a sudden-onset disaster. Droughts, floods, earthquakes and tsunamis have left many victims homeless. At the same time, slower changes such as desertification, land degradation and sea level rise are forcing more and more people from their homes. In general, environmental causes are now intrinsically linked to all the political, economic and social factors that drive travel.

Meeting the enormous challenge we face begins with making it visible. For this reason, the Disaster Displacement Platform (PDD), chaired by France, the artistic project Travel – Uncertain journeys and the Coalition for Art and Sustainable Development (COAL) have come together to engage artists around the world who are witnessing, imagining, experimenting and working towards a world that is more respectful of ecological balance and climate justice.

Through their creations, they can encourage decision-makers to grasp and address the reality of displacement caused by climate change. This collaboration opened a platform for exchange between artists and policy makers during this first week of the 25th United Nations Climate Conference (COP25) in Madrid.

The ceremony in honor of the winners was therefore accompanied by several interventions around the ten projects nominated for the COAL Prize on December 3, 4 and 5 on the French Pavilion.

” Artwork plays an important role in addressing the issue of people displaced by the effects of climate change. Art forces us to look at displacement as a human being, not just as a COP25 negotiator. This is the power of art. It speaks to the heart, it provokes emotion, ” insisted Saleemul Huq of the International Centre for Climate Change & Development (ICCCAD) after the screening of the 2019 COAL Award winners’ film.

The key partners of the DP – the International Organization for Migration (IOM) and the United Nations Refugee Agency (UNHCR) – were also actively involved in the discussions.

” These artists challenge us in a striking way. They remind us that it’s not just about meetings, speeches and documents. They are, above all, families, young people, children and elderly people whose lives are disrupted by floods, cyclones, droughts, desertification or rising sea levels, “said Madeline Garlick of UNHCR during the event.

For Dina Ionesco, from the IOM, the conclusion is the same: “We can easily explain environmental migration by legal, technical, statistical, political terms. But art can push the understanding much further”.

You never know, one day you too may become a refugee
– winning project by Lena Dobrowolska and Teo Ormond-Skeaping

” Who knows, you too could become a refugee,“ a senior Ugandan official said of its migration policy. The country, which is one of the poorest in the world, has taken in more than 1.3 million refugees over the past two years. This is one of many examples of the generosity shown by countries most threatened by climate change, which are now becoming leaders in developing, introducing and negotiating progressive migration policies and constitutional rights related to these issues. This is in stark contrast to the increasingly restrictive immigration practices of wealthier countries. But the tide is turning, and those who felt spared until now may well become refugees in their turn.

In the speculative future imagined by the artists, severe weather and rising sea levels have displaced increasing numbers of people around the world. Well-established migration routes are reversed and many northerners come to seek refuge in the south. Lena Dobrowolska and Teo Ormond-Skeaping imagine a docu-drama about a white middle-class family forced to move to the African continent after a disaster.

This fictional universe is conceived as a tool for awareness and exchange on travel and migration. During major conferences on the climate, in schools and cultural venues, the artists implement a device where the projection is accompanied by meetings, photo exhibitions, fictional documents and workshops for the collective elaboration of scenarios of possible futures. They highlight our shared vulnerability to climate change and remind us how essential generosity and inclusion are to our survival.

” We have always wanted to present our work to policy makers and negotiators. This would never have been possible without a collaboration like this. We know that this award comes with a responsibility and represents a lot of work and learning. We are ready and we will work as much as possible to amplify this dialogue and these exchanges “concluded the winners at the award ceremony.

The ten artists nominated for the 2019 COAL Award are: 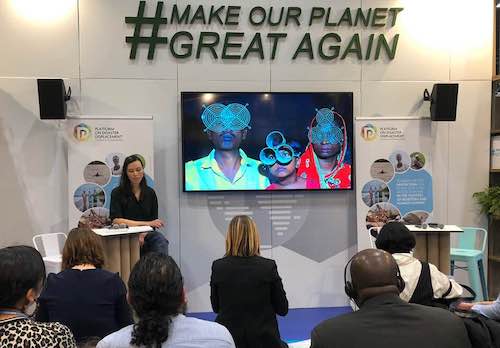