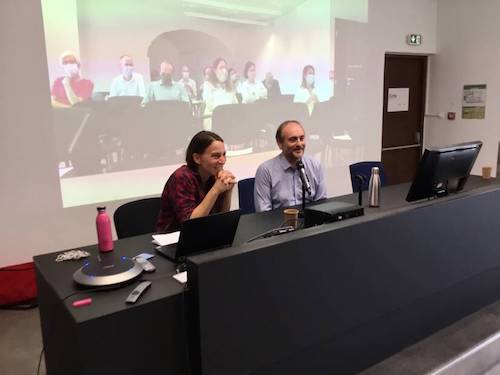 On September 10, 2020, Roselyne Bachelot-Narquin, Minister of Culture, opened the second annual session of the Cycle des Hautes Etudes de la Culture, placed under the sign of Ecology and Culture.

For nine months, the auditors, who come from various backgrounds, some from the Ministry of Culture, some from outside, build, through meetings and conferences as well as in working groups, a strategic vision, debated and shared on the major issues of cultural policies in the face of contemporary changes.

We are living in crucial times of transition. The climate issue has become an emergency and the adaptation of our way of life a necessity.
Culture plays an essential role in these upheavals: in addition to the regulatory changes that need to be made, a more profound evolution is required, involving a change in representations and a redefinition of the imaginary world, where humanity is no stranger to nature, but participates fully in its evolution and its balance.

COAL contributed to the first MODULE of this cycle on September 10-11, 2020. Cultural policies: what new dimensions in a context of transition?

In an environment where the actors are numerous, the policies are territorialized, and the financing constraints are important, what role is expected from the Ministry of Culture? What is the relationship with other decision-makers and actors? How can we anticipate current environmental and social changes and better address the public?

The afternoon was largely devoted to the issue of ecological transition, by putting different projects into perspective. A presentation of the sustainable development strategy of the Ministry of Culture by Olivier Lerude, Senior Official in charge of sustainable development, in dialogue with Lauranne Germond, co-founder of the COAL association, and a presentation by Xavier Delestre, archaeologist, of the Cosquer Cave, a unique witness to climate change, followed.