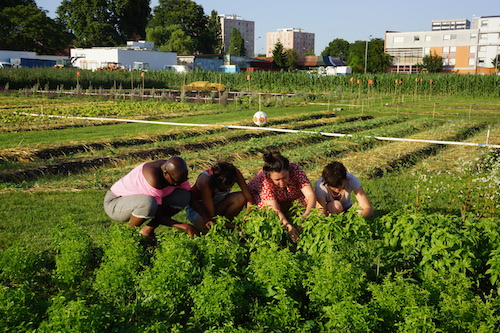 From July 6-9, 2017, COAL and the Poetic Party hosted “Farm Camp!”, the European SummerLab of the Imagine2020 network, as part of the Sustainable Culture Lab#2 The Table and the Territory. Ten artists chosen by the member structures of the Imagine2020 network resided for 4 days at Zone Sensible – Ferme Urbaine de Saint-Denis. Four days to confront the issues of the relationship between food and territory in a context of necessary adaptation to climate change from the concrete example of the Saint-Denis Farm. Each participant produced a work in response to the Farm’s project and the questions raised, using the means of their choice. 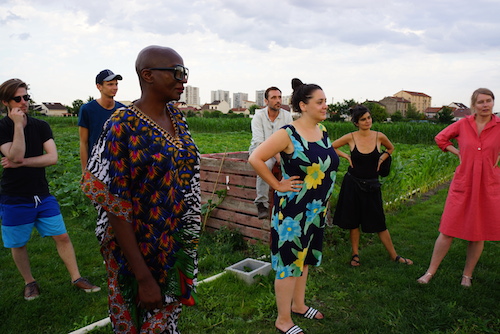 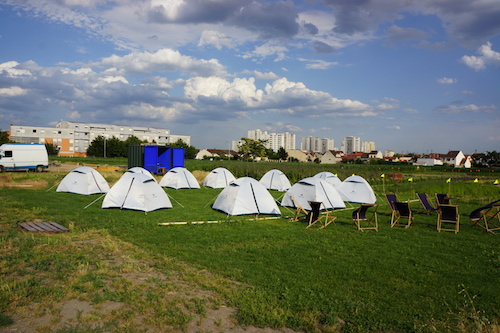 Putting themselves in the situation of farm workers, the artists organized their camp on the site of the Farm and produced new creations around the issues of sustainable food. This first international residency is the beginning of a local and popular collection of contemporary art “made in 93” on the site of the Urban Farm in full reconversion. 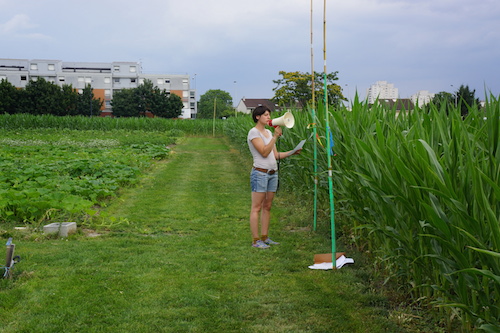 Four half-days were devoted to workshops to further understand the cultural, agricultural and food context of the farm: a discussion on urban agriculture with Adrien Baysse-Lainé, a doctoral student specializing in agricultural relocalization; a guided tour of the Saint-Denis market, the largest in Île-de-France, by local representatives; a permaculture workshop at the farm; a creative writing workshop seeking to produce food fictions based on scientific texts, and conducted by Nathalie Blanc, geographer and director of LADYSS (Laboratoire Dynamiques Sociales et Recomposition des Espaces) and Marine Legrand, anthropologist, Museum National d’Histoire Naturelle; a conference open to the public with Nathalie Blanc (geographer, LADYSS), Olivier Hamant (biologist, INRA), Paulie Guinard (geographer, ENS Paris), Christophe Lavelle (biogeneticist, MNHN), Xavier Fourt (artist of the Bureau d’Études collective) and Marine Legrand (anthropologist, MNHN) which aimed to show the contributions of the collaboration between art and science to the transformation of territories.

Three half days were devoted to experimentation and production of works. These were presented to about 50 people on Sunday, July 9.

The 10 artists organized a walk in the shape of an intestine in the farm, to allow visitors to wander among the plants while discovering the works and thoughts inspired by the place. 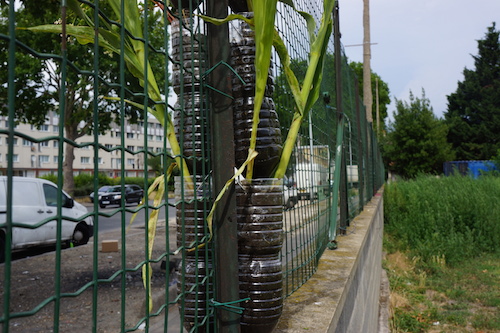 Pauline Toyer, La Ligne
Following the reflections that the artists had during these four days on the notion of border, of belonging to a rural or urban environment, Pauline Toyer created a door between two worlds, that of the farm and that of the city. On the fence marking the separation of these two environments, she has thus suspended in symmetry, on both sides of the fence, a plant from the farm. This production is as much an invitation to the outside world to come and see what is happening on the farm as it is an extension of the farm’s territory beyond its boundaries. 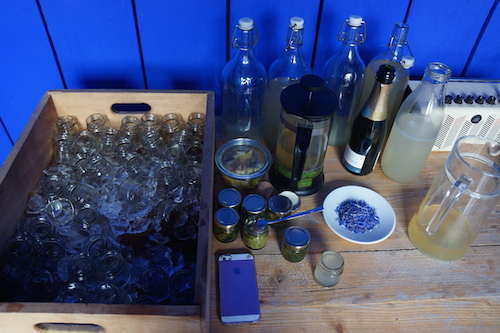 Toms Treinis & Mārtiņš Zariņš, Urban Farmony
Maidie Van Den Bos, City or Rural?
Over the course ofthree days, Toms Treinis and Mārtiņš Zariņš recorded the various sounds of the farm and then made their own sound composition that blends farm sounds and composer tracks. Sitting in the dark in a container, visitors were invited to listen to these sounds while smelling and tasting various compositions made by Maidie Van Den Bos using the farm’s products. These cocktails and scents each referred to either a rural or urban environment. 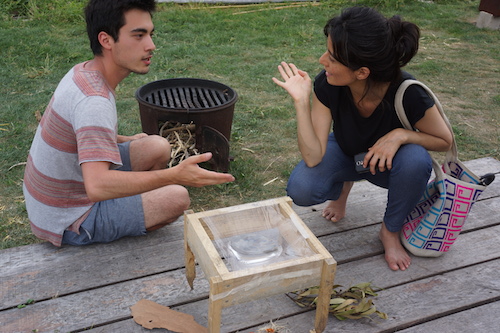 Celsian Langlois, Local Convergence
CelsianLanglois is interested in cooking food and has created a solar installation. A transparent tarpaulin, containing a little water, reflected the sun’s rays. The magnifying effect produced was to lead to a fire starting. Three supports were placed on the ground to encourage this fire: laurel, twigs and wood. The rotation of the sun is then perceptible by the traces that these departures of fire leave on the supports. 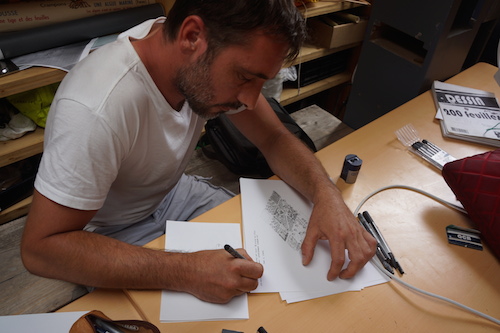 Olivier Nattes, The Possibilities
A set of drawings describes the possible evolutions of the farm, from its takeover by the Poetic Party in March 2017 to 2027. An imaginary story, which leaves plenty of room for alternative and innovative ways of operating. 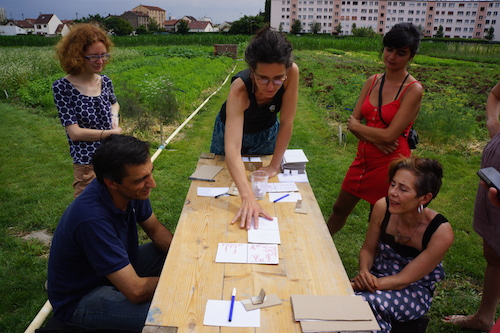 Maria Lucia Cruz Correia and Gosie Vervloessem, The Table and the Territory Game
Through a game similar to dominoes, the two artists invite visitors to explore the boundaries of the farm through imaginary connections. Each participant puts himself in the shoes of an entity of the environment (soil, climate, …) to express his feelings. A game to shift the gaze and get out of an anthropocentric vision. 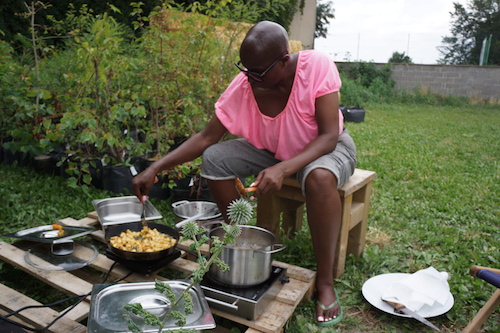 Theo Omambala and Siobhan McGrath, Offalogy Africa
The two artists invited visitors to taste African dishes without revealing their composition. Animal offal, heart, liver, tongue, but also plantains and salad constituted this meal, which refers to the African spiritual offerings to the gods of nature. 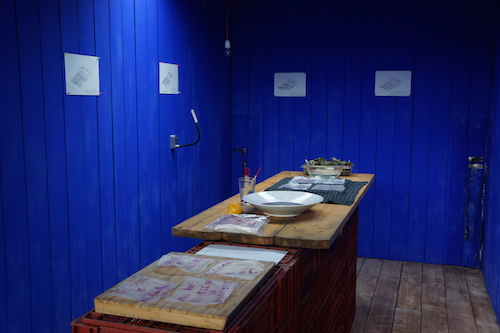 And also:
– Planting questions: on rice leaves, visitors could write different questions about the farm or the relationship to food with red cabbage ink, then fill the leaf with vegetables to taste.
– Readings: various texts produced during the creative writing workshop were read.

This initiative is funded by the European Union through the Imagine2020 network. The Laboratory for Sustainable Culture is also supported by the Ministry of Culture and Communication and the Carasso Foundation.