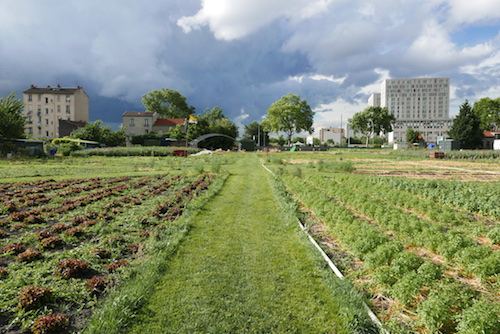 COAL and the Poetic Party are organizing “Farm Camp!”, the European SummerLab of the Imagine2020 network, as part of the Laboratory of Sustainable Culture#2 The Table and the Territory. Twelve artists chosen by the member structures of the Imagine2020 network are invited for 4 days to Zone Sensible – Ferme Urbaine de Saint-Denis. Four days to confront the issues of the relationship between food and territory in a context of necessary adaptation to climate change from the concrete example of the Saint-Denis Farm. Each participant is thus asked to produce a work in response to the Farm’s project and the questions raised, using the means of his or her choice.

The Laboratory of Sustainable Culture#2 “The Table and the Territory

It is within the framework of the second edition of our Laboratory of Sustainable Culture#2 “The Table and the Territory”, that FARM CAMP takes place!

To experiment and implement a cultural approach to the ecological transition of territories, COAL and the LADYSS-CNRS (Laboratoire Dynamiques Sociales et Recomposition des Espaces) have created the Laboratory of Sustainable Culture, a collaborative program at the crossroads of the humanities, natural sciences and the arts. The session “The Table and the Territory” focuses specifically on sustainable food issues and brings together artists and scientists (ENS Paris, ENS Lyon, INRA Lyon, LADYSS) on innovative experimental sites in the field of sustainable food in France, including Zone Sensible – Urban Farm of Saint-Denis. The productions made together are shared through exhibitions, editions and public events.

FARM CAMP! takes place at Zone Sensible – Urban Farm of Saint-Denis. This place is the result of the takeover by the Poetic Party of the last remaining 19th century market garden farm at the gates of Paris. Since March 2017, the Parti Poétique, an artistic collective founded around artist Olivier Darné, has been developing a four-hectare permaculture farm and cultural programming on the theme of “Nature-Culture-Food” as part of a cooking academy project in partnership with Michelin-starred chef Alain Ducasse.

The objectives of this local and participative project are to safeguard biodiversity in the heart of the city, to carry out a cultural action in dialogue with the territory, to contribute to the professional integration of the inhabitants, and to promote the cultural diversity of Seine-Saint-Denis.

On the program of FARM CAMP !

Putting themselves in the situation of farm workers, the artists organize their camp on the site of the Farm and produce new creations around the issues of sustainable food. This first international residency is the beginning of a local and popular collection of contemporary art “made in 93” on the site of the Urban Farm in full reconversion.

This initiative is funded by the European Union through the Imagine2020 network. The Laboratory for Sustainable Culture is also supported by the Ministry of Culture and Communication and the Carasso Foundation.