In the land of the wind, meeting at the Halle aux sucres 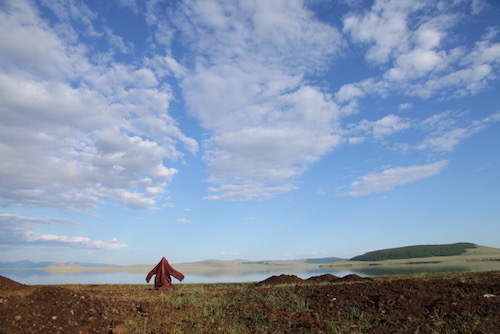 For the inauguration of our exhibitions Plein vent and Au ciel, au vent, à la terre, COAL invites Corinne Sombrun, Fabienne Berthaud and Charlotte Fauve to cross their eyes and their universes, questioning our relation to the natural elements and the invisible part of the world.

The ethno-musician Corine Sombrun, trained in trance by the shamans of Mongolia, has had an amazing career. For the past fifteen years, it is by linking the world of spirits and that of medicine that she has contributed to the progress of neuroscience, studying how trance states can influence the functioning of the brain… and one day, perhaps, help to heal it. From this adventure, the director Fabienne Berthaud has made a film, Un Monde plus grand, released in theaters on October 30. In the “Espace des regards” of the Halle aux Sucres, more than thirty photographs tell the story of this journey to the borders of the immense steppes. To the sky, to the wind, to the earth, the title of this exhibition, refers to the role of the shaman as well as to the spirits of nature: in Mongolia, a country where the winds shape the landscapes and beliefs, it is indeed through trance that the shaman intercedes on behalf of humans with the spirits of nature, a traditional technique that Corine Sombrun is now diverting to therapeutic purposes.

In the company of the journalist Charlotte Fauve, Fabienne Berthaud and Corine Sombrun cross their views and their universes, questioning our relationship with the natural elements and the invisible part of the world. An invitation to reconnect in particular with the wind: present in all cultures, from the steppes of Mongolia to the port of Dunkirk, the wind draws our spaces at the same time as it feeds our imaginations. By rediscovering how certain peoples summon it through song, dance or trance, it is possible to rebuild this culture of the sky and the air, in intimate relationship with the nature that surrounds us.

Corine Sombrun
French author, ethno musician and trained in trance by shamans from Mongolia, Corine Sombrun writes books, mostly autobiographical, testifying to her journey in shamanism and her participation as a subject and co-author in scientific research on shamanic trance

Charlotte Fauve
Charlotte Fauve is a landscape engineer and journalist (Télérama, Le Monde, among others). She wrote the series “Etonnants jardins” for Arte. In 2019, she publishes with Marc Jeanson, head of the Museum’s Herbarium, “Botanist” (Grasset).