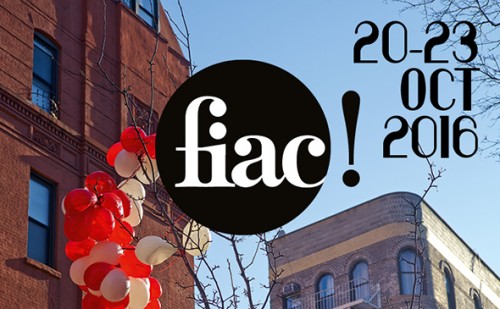 The FIAC entrusts its conference cycle Art and Science to COAL. This year, FIAC will offer three cycles of conferences from Friday, October 21 to Sunday, October 23, in the “Conversation Room” within the fair, a dedicated space at the top of the Escalier d’Honneur of the Grand Palais. Each day, a specific theme is addressed through a direct confrontation between art and other forms of contemporary thought, such as science, architecture or diplomacy.

The conception and animation of the Art and Science cycle has been entrusted to COAL and will take place on October 22nd from 2pm to 6pm, in the Rotonde Alexandre III, on the second floor of the Grand Palais.

For the fourth consecutive year, the FIAC proposes, in collaboration with Coal (association for art and sustainable development), a cycle of round tables that offers a dialogue between an artist, a scientist and a theoretician, this year on the theme: The time of art, the time of the world.
While the frenzy of our ultra-connected, ultra-productive and ultra-consumerist time leads us from novelty to novelty, in a subjective temporality of the instantaneous, the emergency and the speed; reality as for it, cannot be accelerated. Seasons remain seasons, years remain years, the time of the world is permanent and we stall from it in a dangerous diachrony. For example, the day of overshoot, a date in the year when, theoretically, the renewable resources produced by the planet for an entire year have been consumed, occurred in 2015 as early as August 13, and has occurred earlier year after year for decades, making humanity live on credit. As if in opposition to our frenzy, and despite the seasonality of the contemporary art scene, art remains a space that escapes time. With the vocation of proposing and conceiving a universal experience in law, art helps us to escape human temporality. It is intended to build and join a heritage, and thus escape time. However, art remains the witness of its time, and ours is that of acceleration to the point of collapse. So how do contemporary artists reconcile the time of the world with the time of the age and the time of art?

14h Are art and the world timeless?

We seek to preserve art as well as the world, from museums to nature parks we want to preserve what exists, and yet the world goes on, the history of
art its way. Don’t we risk killing the world and art by freezing them in an idealized state? Are we not in danger of losing our heritage and sense of the present by not preserving the past?

The time of the world can escape our perception, limited to our physical and temporal scale. Now the artistic devices do not take any more the man as the measure of all things, and from the most fleeting to the most immense eons it can propose to us to touch with the finger what surpasses us.

With the participation of :

The perceived sense of acceleration of our time, which concerns art as well as our lives and the ecosystem, is now reaching its limits. If the art passes to the rhythm of the seasons, it becomes a fashion and does not make any more work. If the world accelerates beyond the capacity of the ecosystem to function, it collapses. And if our lives accelerate further, we will no longer be able to keep up with the speed and quantity of the stimuli that assault us. Can’t art teach us to find a peaceful time, the time of being in the world?

With the participation of :