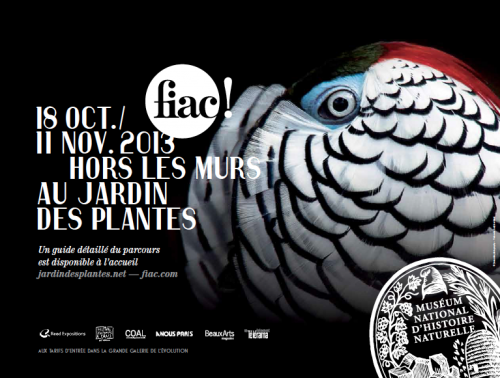 For the second year in a row, the FIAC, in collaboration with the Muséum national d’Histoire naturelle and Coal, is offering a series of round tables as part of its Hors les murs program on the relationship between art and science in the field of ecology and the natural sciences. This year’s theme is “Commitment: when culture takes action”. The round tables will take place from Thursday, October 24 to Saturday, October 26 at the Auditorium of the Grande Galerie de l’Evolution at the Muséum national d’Histoire naturelle.

Each round table proposes a dialogue between an artist, a scientist and a theorist around the possible interactions between art and science.

This series of conferences is part of the “hors les murs” program of the fiac, which proposes an itinerary of contemporary works in an emblematic and historical place in the heart of Paris, the Jardin des Plantes and the different spaces of the National Museum of Natural History. This project is an opportunity to gather the public and to highlight a singular exhibition path around a current theme in total adequacy with the place: art, nature, biodiversity and the environment. The Museum’s living plant collections serve as a support and illustration for the dissemination of knowledge about plants, plant ecosystems, the interaction between plants and animals, and the relationship between Man and Nature.

The expression “committed intellectual” or “committed artist” seems obsolete today, referring either to the wanderings in the face of dictatorships inspired by intellectuals, or to a romantic vision of individual action that no longer makes sense in a globalized world. In the West, the intellectual now seems to avoid putting his thought into practice and to keep his distance from a society less and less influenced by him. The gap is widening. “Art for art’s sake”, the art market which creates an internal dynamic in an increasingly inward-looking environment, has gradually isolated artists from involvement.

But the ecological crisis is coming. As was the case for other great events on the scale of humanity, such as slavery, the nuclear bomb or the Shoah, the events are reshuffling the cards in an unprecedented way: for the first time in history, a common good belonging to the whole of humanity is at stake, on a geological scale, involving its climate, its ecosystem and the conditions of life of man on Earth.

Scientists can no longer remain indifferent to the implications of these discoveries, such as health risks, climate change or biodiversity loss. The philosopher can no longer simply discuss the state of the world in dislocation. To go out of the universities to awaken the consciences on our destructive relation to the world, to get involved and to mobilize the others: the question of the action and the commitment of the artist is again asked and awaited.

The ecological crisis announces the return to a philosophy of praxis, active and engaged, that artists experiment, that scientists feed and that philosophers demonstrate.

Whether it is by questioning the public in its sensitivity, or by involving it in the action or by going as far as creating economic activities, the engaged art is back to carry a project of society with a shared imagination, to put the utopia in action.

Faced with the ecological crisis, the awareness resulting from the warnings of scientists, their sensitive expression by artists, and the conception of their implications by philosophers change our relationship to the world. Will each of us develop an ecological conscience against which our daily actions will be judged?

2. Pierre-Henri Gouyon
Biologist specialized in evolutionary sciences, botany and ecology. He is also o-professor at the Muséum national d’Histoire naturelle.

A sense of urgency and vertigo overcomes us in the face of ecological issues, because of their global dimension and their rapidity, to the point where it is not only a question of acting, but already of fighting. It is not only a matter of preventing the coming crisis, but also of adapting to the one already underway. What are the modalities of action recommended by philosophers, scientists and artists?

Artists, scientists and philosophers leave their respective circles to confront their convictions with reality, even if it means going back to the history of utopia. Actors of change, these different actors intervene where they were not expected. What legitimacy do they have? Are they still able to unite energies around them? Are they still heard by a public that has lost the habit of the figure of commitment?

3. Virginie Maris
Philosopher, CNRS research fellow at the Centre for Functional and Evolutionary Ecology in Montpellier.