Release of the book Man made clouds: signing party and projections 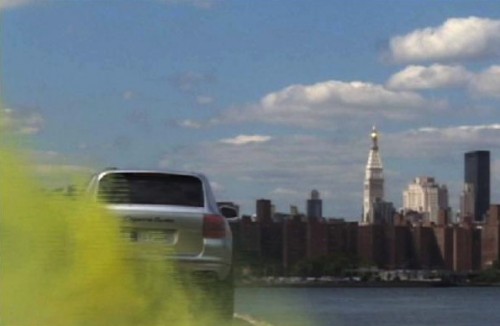 COAL invites you to a signing session and video screening in the presence of the artists and Veit Stratmann at the REcyclerie on the occasion of the release of the book Man made clouds by Hehe.

This event is part of the September program dedicated to Germany and Nuclear Europe of the possible REcyclery. Each month, COAL contributes to this program by presenting a committed European artist.

At a time when the relationship between art, science and ecology is crucial, the book Man Made Clouds offers us a dreamlike journey through the prototypes imagined by HeHe. This artist’s book includes contributions from six authors around the perception of man-made emissions from an artistic and historical perspective. Man Made Clouds is also a work of art. Each of the books contains a bookplate whose paper is made from 100% organic tobacco, specially grown for this purpose in Italy, on the lands of Pollinaria, in Abruzzo…

Clouds occupy a special place in our imagination; their innumerable forms and combinations offer infinite possibilities of metaphors. In the graphic culture, far from being neutral forms, the representations of clouds really express a philosophy. And yet, although much has been written about clouds and despite their frequent interventions in art, design or architecture, few authors have dealt with man-made clouds, these “man-made clouds” resulting from our consumer society.

Produced by industrial emissions, exhaust fumes or cigarettes, artificial clouds shape a landscape charged with multiple meanings, from a critical as well as social point of view. More explicit in that than the clouds shaped by nature, the clouds of human origin seem made to carry political ideas. The present work questions the perception, the representation and the phenomenology proper to these clouds of human origin; it tries to decipher the multiple meanings that they can have.

The “manufactured” cloud, of human origin, is at the heart of the consumer society; when it diffuses in the air, it constitutes a flagrant manifestation of this consumption. But in everyday reality, the very people who trigger such emissions often make them invisible, by disguise, by burying or by displacement. Thus, industrial production and consumption of non-renewable resources are fading from the collective consciousness.

The work explores the cloud as a metaphor, which aestheticizes the emanations to place them in the field of a critical vigilance. Here, the clouds of human origin are highlighted and transformed. By shifting our fascination with natural clouds to man-made clouds, we perceive them – and ourselves – differently. The work of artists Helen Evans and Heiko Hansen (HeHe) which is discussed here questions the unbreakable relationship between man and his environment. The very notion of natural clouds, pure and clean, inaccessible to mankind, belongs to a bygone age.

Man made cloud is published by HYX Publishing in mid September 2016.

A Paris-based artist duo composed of Helen Evans (UK, 1972) and Heiko Hansen (Germany, 1970), HeHe’s work questions the ever-increasing energy needs of our contemporary society by “visualizing” its social, industrial and ecological paradoxes through installations that are often performances. HeHe’s directory presents the worst cases of technological disasters, revealing the hidden dimensions and consequences of such ecological threats. HeHe’s installations-performances are the “machines” themselves: oil rigs, nuclear power plants, incinerators, cars, cranes and electrical appliances of the consumer society. In situ installations or sinister stagings, the machine becomes a theatrical device in an apocalyptic landscape of fluorescent color.

In another research project about mobility ( Train Project), the Métronometransporteon an abandoned railway track (Parisian small belt) the travelers in a bubble of dream and utopia.

Their monumental project NuageVert, realized in 2008 in Helsinki, uses a laser beam to draw an outline on a cloud produced by a power station; the green cloud changing size according to the consumption of the inhabitants. The installation was awarded the prestigious “Golden Nica” at the Ars Electronica festival in 2008 and has received many other awards: honorable mention at the Arts Electronica (2012), the “Environmental Art Fund” in Finland (2008), the “Zero One” in San Jose (2008) and the “Cynet Art” in Dresden (2001).

Three events are planned between now and the end of the year: the release of their book (mid September) Made Made Clouds published by Editions HYX, with the support of Cnap, the von Braun Foundation (Germany) and Pollinaria (Italy); a series of installations Cloud Crash (October – February 2017) for Cape Farewell in collaboration with the Manchester Museum of Science and Industry and a monumental sculpture Gone with the Wind (November) in Utrecht for Public Works (Foundation Kunst+City of Utrecht).

HeHe is represented by the Aerosplastics gallery located in Brussels.

On the occasion of this signing session, the video works Fleurs de Lys by Hehe and Une colline by the artist Veit Stratmann about the nuclear issue will be screened.

The Fleur de Lys installation simulates the fusion of a nuclear core. The cooling tower of a miniaturized atomic power plant and its post-industrial landscape are immersed in an aquarium. At regular intervals, a cloud escapes from it, in a sound and light staging simulating a miniature catastrophe echoing the imagination of Hollywood cinema. 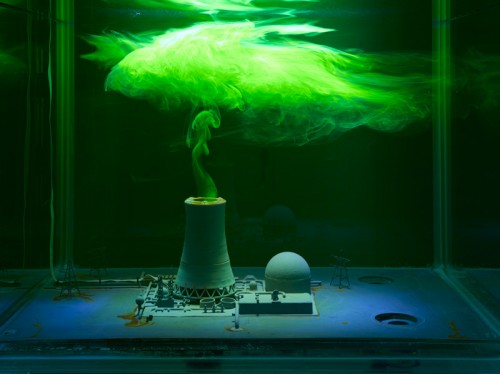 “A Hill” is both a study and a plastic device imagined by the German artist Veit Stratmann, in response to the program “Art for future generations” of the National Agency for the Management of Radioactive Waste (ANDRA). This study and its working group question the means of maintaining the memory of nuclear waste storage sites and the information on their contents through the centuries to come. More information on ressource0.com