Exhibition of Residents 2012 at the Domaine de Chamarande

During 2012, four artists in residence collaborated on the development of an ecological management of the Domaine de Chamarande and worked on new social issues related to the environment. True laboratories of experimentation, their projects are based not only on the art of gardens and historical heritage but also on the ecosystem of the park and the ecological and social specificity of Essonne. To close this year of research and collaboration, the Domaine de Chamarande presents a selection of their latest work at the Orangerie. 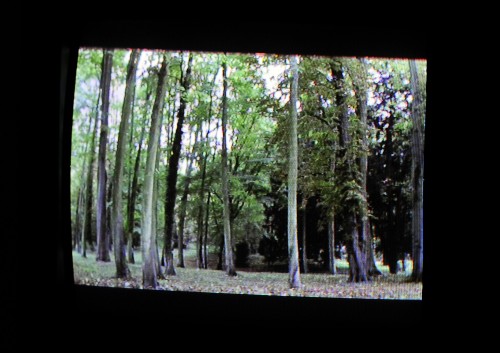 Untitled
In residence at Chamarande, Pauline Bastard has created a series of works situated on the border between contemporary art and country life; works inspired by both the artistic and natural dimensions of the place. His work was presented in the park and at the castle during the summer during the Salons exhibition. She also planted vines in the vegetable garden. The Domaine de Chamarande now produces its own vernissage wine, a pinot noir harvested and bottled on the property by the artist herself. The first tasting is planned for next year!
His residency culminated in the making of a film which is presented here.Untitled is a still shot of a green forest. This landscape image turns out to contain a group of people who appear intermittently, emerging from behind the trees. This presence suddenly gives a temporality to the video, then the shot empties again of its actors as soon as they hide, and the image then falls back into a kind of inertia alternating moments of pause and activity. Made with a group of teenagers visiting the Domaine de Chamarande, the movement at first resembles a game of hide-and-seek, then quickly gives off the feeling of a strange wandering in the image. 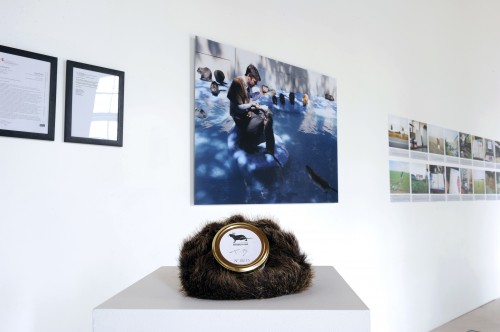 Sad trophic
For his residence in Chamarande, Thierry Boutonnier wished to focus his attention on an important part of the ecological management plan of the park : the regulation of the invasive species, and more particularly, the case of the coypu, Myocastor coypus. Studying the evolution of the art of hunting, he reveals the shift that has taken place in this register towards a society of control. From now on, it is no longer a matter of feeding or continuing a ritualized tradition, but of watching out for undesirable individuals. It is necessary to regulate pests and game, get rid of invasive species and protect the weakest.
The artist makes visible the troubled relationship we have with these species at the border between the domestic and the wild. Productions and testimonies of his research relate the different strategies he developed to bypass the experts’ recommendations. On the one hand, he tries to negotiate the return of the animal to its country of origin with the embassies of the countries in question (Chile, Argentina, Bolivia). On the other hand, he tries to revalue his meat by reactivating old recipes like this Coypu pâté produced at the Domaine de Chamarande. The artist also organized a symposium on hunting art during the 2012 Heritage Days. 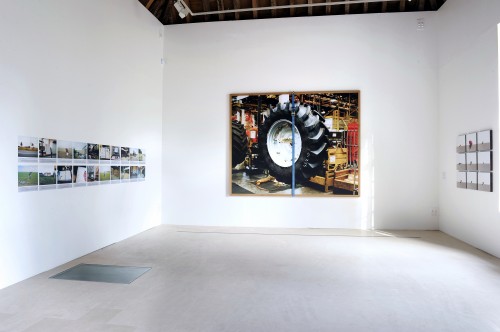 The new agriculture
In residence at Chamarande during 2012, Sylvain Gouraud has endeavored to construct a point of view on today’s agriculture, which is quicker to adapt to market constraints, more connected with precision technologies and in search of a comfortable life. The subject is well known but often treated in a polemical way (by opposing organic and conventional agriculture, by taking a position for or against GMOs). Sylvain Gouraud tries to detach himself from this critical notion to get closer to the notion of composition. Thus his work of investigation is situated in the field of anthropology. This has led to a desire to rethink the production of scientific knowledge and works of art. This is why he invites the actors and the public, through the images he produces, to try to redefine agriculture.
In this exhibition, the viewer is brought face to face with the change of scale that characterizes the transition from yesterday’s agriculture to today’s. His tractor wheel is printed life size, and his seeds are ten times bigger. The series of images presented on the left wall reflects the actors he met during his research and the mesh of information related to them. 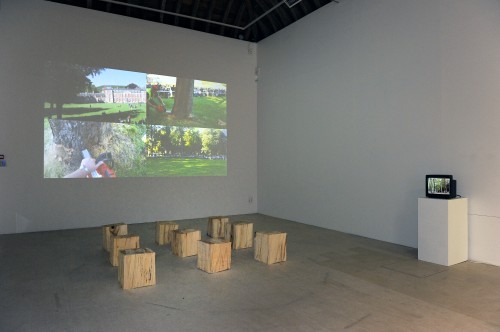 Pseudomonas syringae
Stefan Shankland begins his residency at the Domaine de Chamarande this fall. It proposes to study the transformation of the territory of Essonne during the 20th century, in resonance with the history of its architecture. He was inspired by an episode in the history of the Domaine Chamarande: Auguste Mione. Last private owner, he rehabilitated the place in the 1960s. A public works contractor, he was also the project manager for Le Corbusier’s Cité Radieuse in Marseille, a symbol of large-scale collective housing.
To inaugurate this residency, he presents the testimonies ofPseudomonassyringae, a project realized by the artist for the exhibitionSalons with the complicity of Raum architects. How to “make a living room” from the natural resources of the Chamarande site? How do you bring back to life a tree that has been affected by the Pseudomonas syringae disease and must be cut down? This was the equation that Stefan Shankland and Raum Architects put on stage. The transformation process begins with a spectacular performance on the day of the opening where the tree was cut down, then the transformation of the tree into furniture in front of the public. The result is this new space and this film, whose genesis is the subject of exchange for the visitors who experience it.

RESIDENTS
From November 25, 2012 to March 3, 2013
By reservation: chamarande@essonne.fr
At the orangery