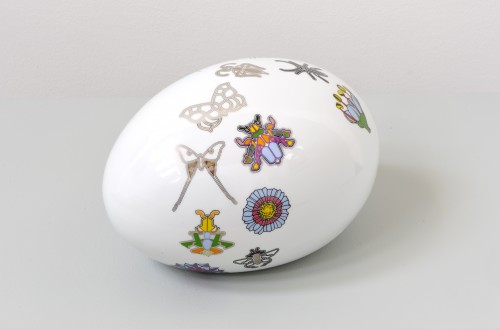 From the Enlightenment we have inherited the taste for an ordered and encyclopedic knowledge of nature through collection, classification and empiricism. In a historical complicity, the artist and the scientist have sought each in their own way to circumscribe nature through representation. With the exhibition Specimens, the castle of Chamarande is transformed into a real museum where the surrounding nature settles to spend the winter. Eleven international artists present the fruit of their confrontations with naturalist practices. From imagined specimens or taken from the field, they invent a new sampling of the world. They create their own modalities of classification, protocols of observation and experimentation that copy and thwart scientific processes to recompose our representation of the natural world.

Like sentinel species, whose extreme sensitivity to changes in their environment is an early indicator of ecosystem disturbances, artists, in the light of ecological issues, are the markers of a questioning of the notion of progress, of scientific and human development, on the scale of the Earth. By what processes do we apprehend nature? From which specimen-stallions do we build our representation of the world? How do our scientific designs maintain the illusion of a controlled environment? How to take into account the singular, the immaterial, the accident? What are our ethical and aesthetic responsibilities towards the environment we transform? But also of the one we decide to leave intact?

This set of monumental works offers visitors the possibility of immersing themselves in the marvelous flora of a hectare of Amazonian forest, of observing rare specimens of extinct species, of crossing an elephant cemetery – an echo of the orchestrated extinction of large mammals, of being attentive in their reading of the landscapes to the humility of the small things, to draw up a new cartography of the grounds in front of the accumulation of thousands of samples whose chromatic diversity is the principal richness, to pay homage to the fruit of uncertain and cruel hybridizations, or still to release the species from the yoke of the man to the image of this silkworm prisoner for 5.000 years of human selection, to listen to the story of the men who shot in the clouds to counter the hail, to question the laws of the human perception by the blurring of the senses and the play of the aromas.

Immersed in a privileged space of observation and interaction, the visitors are engaged by the whole of the formulated testimonies to preserve the existing while producing new knowledge. A friendly approach to the exhibition and mediation spaces invites us to enter into a dynamic of exchanges to better live together.