From November 25, 2015 to January 3, 2016, for ArtCOP21, La Villette and COAL invited Michael Pinsky to invest the Ourcq Canal with the work “L’eau qui dort” (Sleeping Water), composed of about forty floating pieces, on either side of the 2 banks.

The canals of Paris, historical and sustainable communication routes by essence, are a key place of exchange and resource in our history. But this ecosystem, which is very sensitive to the climate, is also often the receptacle for the rubbish thrown away by local residents. Invisible discharge that hides our overflow of objects under its still waters.

With the help of a team of divers and the services of the Paris canals, the artist Michael Pinsky went to find in the depths of the waters and oblivion, the domestic wrecks, which the community got rid of, to expose them on the surface. 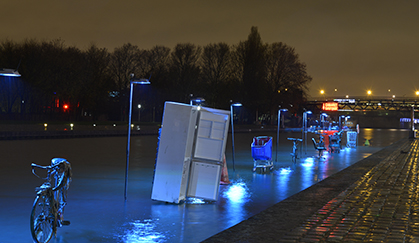 Confronting society with its production of waste, artist Michael Pinsky brings back to life and brings to light on the surface of the canal: bicycles, cans, shopping carts, signs, both strange and familiar. The installation is accompanied by a soundtrack made from these metal objects emerging from the water. The public is invited to download it on their phone and listen to it near the work. The sound of the objects, used as real instruments, provokes a wave of vibrations that resonates in the spectators’ bodies. This musical score was created in a workshop with groups of teenagers living near the park as part of the mediation process initiated by La Villette.

The work has a positive effect on the environment by cleaning the canal in full view of passers-by. With this poetic and educational work, Michael Pinsky invites us to question the consequences of a “banal” gesture, that of throwing away, reproduced on a societal scale.

The Sleeping Water by Michael Pinsky

Born in 1967 in Scotland, he lives and works in London, England. Of Scottish origin, Michael Pinsky has exhibited in numerous galleries and festivals (Tate Britain, Saatchi Gallery, ICA London, Liverpool Biennale, Los Angeles, International Architecture Biennale of Rotterdam, etc.). During his research and residencies, he explores issues that affect the form and use of our public space. An artist, urban planner, activist, researcher and resident, he works with local people and resources, allowing the physical, social and political environment to define his working method.A retrospective was dedicated to him in April 2014 at the Museum of Contemporary Art in Chengdu, China.

An event to be found on ArtCOP21