For the second consecutive year, the PETR of the Sundgau region has entrusted COAL with the artistic direction of STUWA, the artistic journey through the villages of the Sundgau, a region in southern Alsace. In 2016, artists Guillaume Barth, Gilles Bruni, Aram Kebabdjian and Stéfane Perraud, Julie Navarro, Les Nouveaux Voisins, Thierry Payet, and Sophie Roux-Pagès are invited to invest seven new villages with works that echo the culture, landscapes and local life of the Sundgau. They will intervene in the villages of Bernwiller, Bisel, Heidwiller, Hirsingue, Tagsdorf, Ueberstrass and Waldighoffen.

The Stuwa was the living room of the traditional Sundgauian house.
It is in this place of gathering and exchange that the language, the stories, the history and the cuisine, in short the culture of the territory, was forged and shared.
The Art and Nature trail in the Sundgau, which takes its name, proposes to generalize the exchanges between the inhabitants and the visitors. The works of art along the route thus become so many collective Stuwa, which reflect the cultural and geographical richness of the territory. The imagination of artists gives nature a new and wonderful dimension, at a time when questions of sustainable development and ecology have become crucial for the future. Each work participates in the renewal of our view of the environment, nature and the strength of the local identity, thanks to the sensitive and original interpretation of the Sundgau territory by the invited artists.

By creating STUWA in 2015, a contemporary art trail in its villages, the Sundgau is renewing its thinking on landscape, ecology, public space and local life by drawing on its history to look creatively to the future. For the 2015 edition of STUWA, seven unpublished works by regional and national artists have taken over seven villages in the Sundgau.
In 2016, STUWA replicates this same principle in seven new communities willing to host as many works of art to discover the Sundgau landscapes through the themes of water, living together, sustainable construction and local heritage.

In Ueberstrass, Guillaume Barth calls on the avian diversity of the Sundgau and the need to protect it by equipping the lime tree of the Jean-Baptiste chapel with braided nesting boxes; while Gilles Bruni carries out a residence of interpretation of the landscape and the local culture with the inhabitants of the commune of Bisel from which its Observatories. The badger’s throat d’Aram Kebabdjian and Stéfane Perraud gives a voice to the well of Tagsdorf; the Butterfly from Julie Navarro is inspired by the history of the textile industry in the town of Waldighoffen by the creation of an allegorical work, a futuristic greenhouse which is built with the landscape; in Hirsingue, The New Neighbors revisit traditional Alsatian architecture, suggesting less polluting construction methods. Finally, the Cabane à histoires co-constructed by Thierry Payet recalls the cultural and natural heritage of Bernwiller and the delicate landscape composition Roselière by Sophie Roux-Pagès, underlines the progressive disappearance of the latter in our regions, impacting the natural filtration of water and the development of biodiversity.

Complementary cultural actions by the actors of the territory

> Creation of the landscape garden of the Jean-Jacques Henner House in Bernwiller, in association with the artist Thierry Boutonnier who imagined the work Anthropo-cène.
> Inauguration of the work of the Cercle des mécènes du Sundgau, Veraltet Veraltet, a creation by Paul Souviron in Wolschwiller.

INAUGURATION OF THE STUWA ART AND NATURE TRAIL, SUNDAY JUNE 5, 2016

Visitors will be able to take part in the STUWA CIRCUS II, departing from the Altkirch train station, from 8:45 am to 9 pm, allowing them to discover the works of art by bus from village to village, on a 110 km route. Cultural events will be held at each site.

Reservations required by June 1, 2016 at: info@pays-sundgau.fr 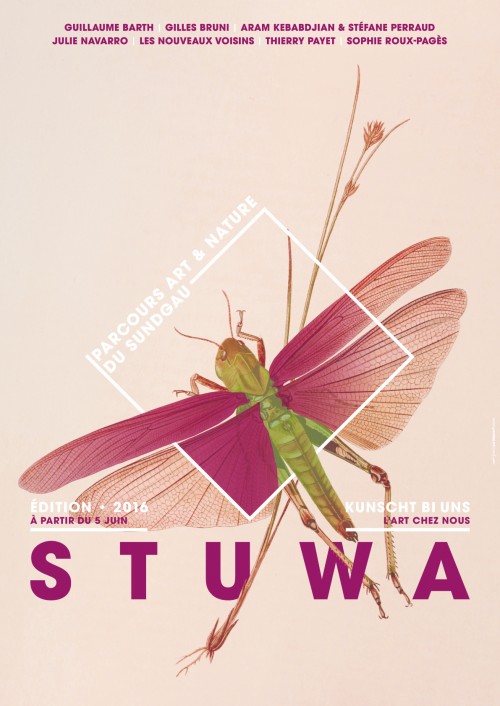