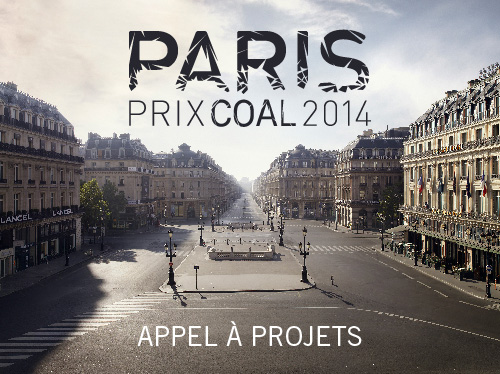 The COAL Art and Environment Prize reveals the richness of the answers brought by the artists to the current environmental problems. Since 2010, the COAL Prize honors each year ten projects related to environmental issues, which are selected through an international call for projects involving hundreds of artists from around the world. One of the artists is awarded the COAL Prize of 10,000 euros by a jury of art and ecology personalities. In 2013 the COAL Prize, on the theme Adaptation, was awarded to Laurent Tixador for his project “Transitional Architecture”.

In 2014, the theme of the COAL Prize is PARIS. The environmental and societal issues facing the French capital are numerous: pollution, energy, urban sprawl, transportation, land, biodiversity erosion, adaptation to climate change, etc. A creative approach to ecology is emerging in new social organizations, alternative modes of production, collaborative ways of living and working that advocate conviviality as well as happy sobriety. After having been for a long time the city of light, symbol of industrial modernity and progress, will Paris be able to shine again by embodying ecological post-modernity?

Paris, one of the world’s great capitals of culture and creation, invites artists in 2014 to demonstrate together the central role that art can play in a sustainable and responsible city. The artists, mostly urban, heirs to the diversity that Paris embodies, are invited to shake up, rethink, and reinvent the capital, in a multipolar and connected world, to define a more just and radiant urban culture, in harmony with nature.

The 2014 COAL Prize will be awarded in Paris on April 10, 2014 at the Museum of Hunting and Nature, during a ceremony attended by the ten selected artists and personalities from the art and sustainable development fields.

The closing date for the call for projects is midnight on February 10, 2014.
The COAL Award will be presented on April 10, 2014 at the Museum of Hunting and Nature in Paris.

– Nathalie Blanc, Director of Research at the CNRS (LADYSS) in urban geography
– Anne-Marie Charbonneaux, President of the art center Le Magasin in Grenoble
– Claudio Cravero, Director of the Parco d’Arte Vivente in Turin

The selection committee is chaired by Anne-Marie Charbonneaux.

The selection criteria of the projects take into account the artistic value, the relevance (understanding of the stakes), the originality (capacity to propose new approaches, themes or angles of view), the pedagogy (capacity to pass on a message, to raise awareness), the social and participative approach (commitment, testimony, efficiency, societal dynamics), the eco-design and the feasibility

The COAL Prize supports artistic projects in progress or to come. Its 10,000 euro endowment does not necessarily cover the totality of the project’s production costs and must be considered as an aid to its development.

Beyond the awarding of the COAL Prize, the call for projects is also an opportunity to promote artists involved and to testify to the creative potential of the plastic arts on the theme of the environment.

Coal wants to foster the networking of these artists with scientists and stakeholders, produces, enhances and promotes projects identified by the call for projects through exhibitions, events and commissions. The projects may be disseminated on Ressource 0, a national platform for arts and ecologies, with the agreement of the artists.

-A synthetic and illustrated description of the proposed project presenting its artistic dimension and its perspective with the environmental subject and the annual theme;
– Two high definition visuals illustrating the project;
-A note on the technical characteristics of the project, particularly in terms of infrastructure and means of production;
-Budget estimate;
-A Curriculum Vitae and an artistic file.

All proposals must be submitted on the COAL server by February 10, 2014.

> Put your file online on the COAL server

By participating in this call, the authors of the projects expressly authorize COAL to publish, reproduce and publicly distribute all or part of the elements of their project, for all purposes related to the promotion and communication of the COAL project, on all supports, by all media, in all countries and for THE LEGAL DURATION OF COPYRIGHT The projects submitted and not selected will remain in the archives of the COAL association. They remain nevertheless the property of their authors. Participation in this call for projects implies full acceptance of the above conditions.

For any additional request please write to: contact(a)projetcoal.fr