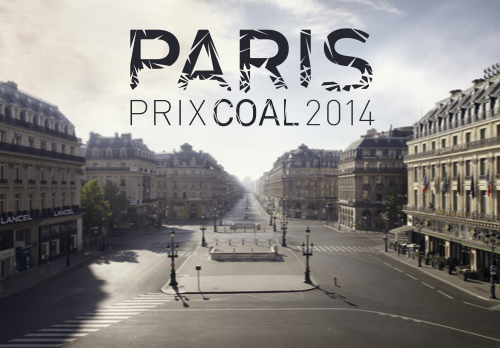 The COAL Art and Environment Prize will reward the commitment of contemporary artists to current environmental issues. For this fifth edition of the COAL Prize, nearly 200 applications from artists from over 30 countries were received. The winning project, chosen from among ten nominated projects, will receive an award of 10,000 Euros on April 10.

In 2014, the theme of the COAL Prize is PARIS. The environmental and societal issues facing the French capital are numerous: pollution, energy, urban sprawl, transportation, land, biodiversity erosion, adaptation to climate change, etc. A creative approach to ecology is emerging in new social organizations, alternative modes of production, collaborative ways of living and working that advocate conviviality as well as happy sobriety. After having been for a long time the city of light, symbol of industrial modernity and progress, will Paris be able to shine again by embodying ecological post-modernity?

To consult the catalog of the ten finalist projects of the COAL Prize 2014, CLICK HERE!

The Jury of the COAL Prize 2014 is composed of:

The Coal Art & Environment Prize ceremony will take place on April 10 at 6:30 pm at the Museum of Hunting and Nature, in Paris (3rd arrondissement). The COAL Prize is placed under the high patronage of the Ministry of Culture and Communication, the Ministry of Ecology, Sustainable Development and Energy and the National Center of Plastic Arts. It is supported by the Egis group. The ceremony is organized in partnership with the Museum of Hunting and Nature, Hédonie and the responsible communication agency Limite.