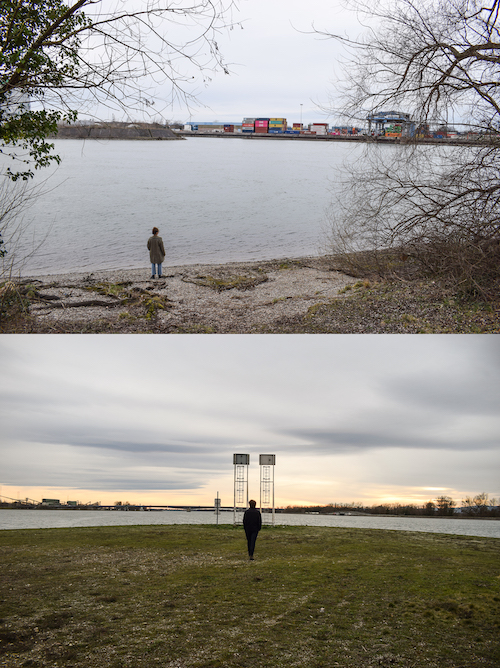 As part of the COAL – Culture & Diversity 2020 Student Award, four student projects have been nominated as finalists for this first edition. Each day, we offer you a meeting with one of the nominated projects.

Clara Hubert was introduced to creation with the Aloual Persona Theater, joined the CPGE Art&Design of the École Duperré in Paris and became, in 2018, assistant director and set designer for the project Les Esprits Libres of the Collectif Or NOrmes. Thomas Cany has been a sound engineer and lighting designer since 2015 for classical concert performers and theater companies, among others at the Festival d’Avignon, Théâtre de Gennevilliers and International Visual Theatre. In 2018, he became general manager of the ENS de Lyon.

They meet in 2019 when they integrate the National Theatre School of Strasbourg. Exploring the link between technicality and nature, territories and cultures, poetic narration and ecological reality, they synergize their diversity to inscribe their gestures towards a sustainable alternative.

Storage, containment, migration, disappearance. In Strasbourg, where Clara Hubert and Thomas Cany live, the Rohrschollen Island Nature Reserve – Rohr means reed and Schollen means lump of earth – coexists with an industrial port area. The European Union and the City have invested 2 million euros in the Life+ project to restore these alluvial forests with artificial flooding. Can nature and technology work together?

The powerful ambivalence of this landscape inspires a theatrical laboratory: Moi, Vivant.e.

On the bank of the industrial port of the Rhine, the duo hijacks a container that becomes a prism for natural light: the Container-Theater. On the other side of the river, at the edge of the protected area, they build its replica, the Théâtre-de-l’Ouvert, a structure of wood and fabric. Two shows are invented there, echoing the mutations of the same land. The presence and the play of the actors are based on a creation by an author in situ. In these observatories of nature and its movements, the inherent hazards of the place write with them the final score.

Moi, Vivant.e is based on a circular economy and eco-design. By its technological “poverty” and its machinery, it wishes to praise a technical theater without energy consumption. The projectors are made without electricity, using only sunlight as a source, but seeking to match the quality of lighting of a contemporary stage.

The project intends to reappropriate a theatrical tradition – in the etymological sense: “place from which one sees” – and proposes a mediation between the port, the Nature Reserve and the inhabitants. Through this crossing, he seeks to inspire a sense of common belonging.

What is your relationship, as an artist or as a person, to environmental commitment?

For us, the environmental crisis is inseparable from our lives, it requires a commitment. In a world where, as citizens, we do not find our place and where we are often powerless to act, playing with the issues of degrowth, protection and sustainability allows us to sneak out of the anguish.

Our desire to act crystallized when we met at the Théâtre National de Strasbourg, and we saw in the call for projects of the COAL – Culture & Diversity Student Prize an opportunity to implement our ideas.

Environmental commitment is often perceived as a constraint in theatrical creation, but we are working to make it our own. We seek to produce, build and disseminate our works differently to participate in the ecological transition. We find ourselves in a situation of experimentation similar to that of adolescence, full of idealism and uncertainty: we try through chance, risk and play to construct our political and environmental orientation.

Clara: I imagine that the world to come will have remained unchanged, or become amorphous. If humanity is not yet asphyxiated, it will have to live “under the cloak”. Laughter and imagination will have disappeared, and with them any possibility of escape.

Thomas: For me, there is an urgency to act because an opportunity is offered to us, the time is no longer only for imagination, but for implementation. Despite the anxiety generated by an elusive world, my only certainty is that I do not imagine myself alone in it.

Clara and Thomas: We don’t know what the world will be like, but we want it to be better. Together, it is easier to transform the inertia of our fears and hopes into action. Thus, it is art in its relationship to the world around us, which feeds our imagination and which participates in the construction of the future.