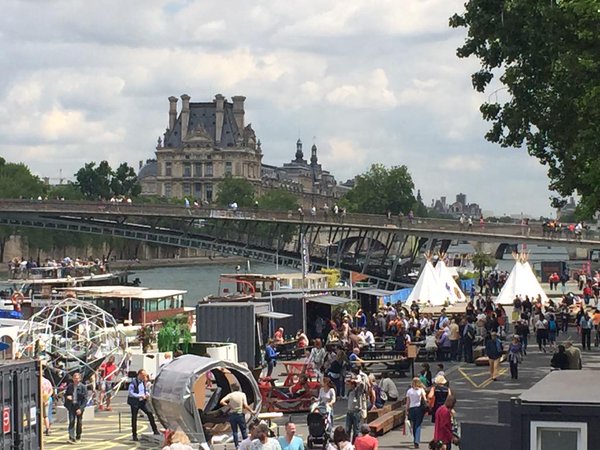 With the ArtCOP21 Festival on the banks of the Seine in Paris, COAL proposes a weekend of citizen participation in the great debate of the COP21 through interventions of artists on climate issues.

With the ArtCOP21 Festival on the banks of the Seine, in Paris, COAL proposes a weekend of citizen participation in the great COP21 debate through artists’ interventions on the major climate issues.

Climate change is everyone’s business. In this year 2015, the Parisian atmosphere is particularly attentive to this subject with the preparation of the COP21 which will take place in Le Bourget from November 30 to December 11. Without the involvement of citizens, the negotiations that will take place at the end of this year cannot succeed.

This is why this first ArtCOP21 event has been designed as an exchange device, led by artists but entrusted to citizens, to make the banks of the Seine, a historical and sustainable communication route, a space for dialogue, awareness and mobilization around the climate. In the era of the sharing economy and the reappropriation of public space, come and share the creative energies that exist today in Île-de-France around the COP21! 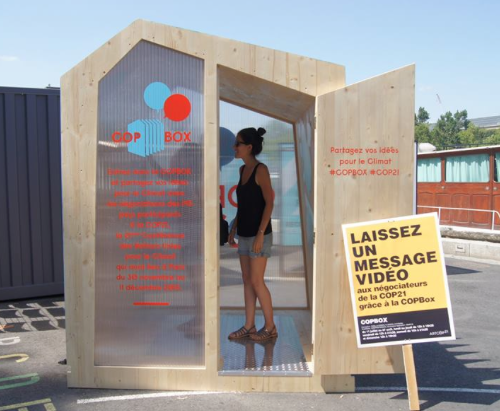 Leave a video message to the COP21 negotiators with the COPBox

The COPBox is a participative module designed by COAL and Lemoal&Lemoal Architects for the COP21. Placed in the public space, the COPBox allows any citizen to record a personalized video message to the negotiators of the 195 countries participating in the COP21. Oriented on the sensitization to the climatic stakes, it will be the symbol of the citizen mobilization throughout ArtCOP21 until December.
To be continued #COPBox#COP21

COAL is the first French actor to mobilize artists and cultural actors on climate and environmental issues since 2008 and the initiator of ArtCOP21, the Paris Climate 2015 Cultural Agenda. To develop the COPBox, COAL has partnered with Lemoal&Lemoal Architectes, a young architectural firm based in Paris.
www.lemoal-lemoal.com 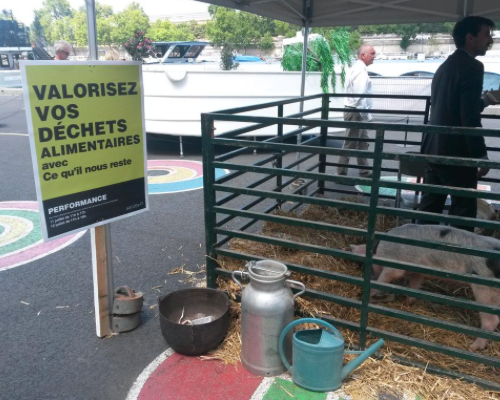 With Ce qu’il nous reste, Thierry Boutonnier, transformed into a company manager of organic waste recovery, goes to meet the passers-by by proposing to Héroïca, pig of the year of the Ferme du Bonheur, to feed himself with their food remains. A true incarnation of a short circuit of material valorization to question our devastating food behaviors.

Thierry Boutonnier develops living works which question our domestication. He grew up on his parents’ dairy farm and worked as a farmhand to finance his studies at the National School of Fine Arts in Lyon. What we have left is a continuation of his series The Objectives of Production, in which the aim was to present the future of things directly to things. Always in interdependence with the ecosystems he invests, his works approach the question of ecology in a protean and critical way.
www.domestication.eu 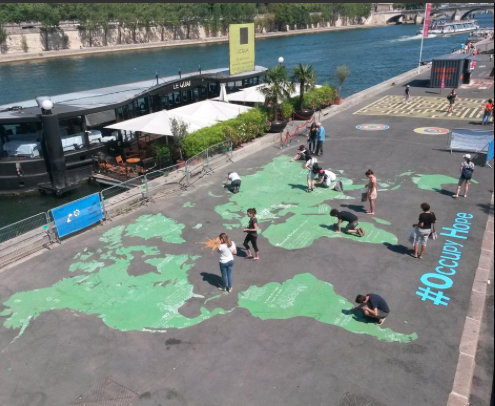 Take a stand with the installation #OccupyHope, by the collective Ya+K.

#OccupyHope is a performative installation imagined to question our capacity to build new forms of spaces for debate and political action. During the two days of the festival, #OccupyHope builds a public space-time from the multiplicity of words and slogans suggested in-situ and on Twitter. A poetic slogan and a # to invite action and federate proposals around a revolution always possible.

YA+K is an interdisciplinary collective developing an active practice that is always connected to its territories of intervention. It experiments, through the production of active architectures and the elaboration of protocols of collective involvement, new forms of public and critical space-time. Working on different spatial and temporal scales, crossing disciplines, the collective aims to question the classical modes of production of public space by working on its social, political and aesthetic issues.
www.yaplusk.org

Daily downpours, dazzling thunderstorms, fine azure rains, soaked clouds… Between the drops, what do we hear in the great rainforests of Asia and America? From field recordings, mixing stereophonic ambiences, underwater recordings and parabolic microphone recordings, the sound artist Rodolphe Alexis invests the Douche Sonore and invites us to the musicality of the biodiversity of the great forests of the world.

Rodolphe Alexis, sound designer, sound operator and founder of Double-Entendre – Vibrö, develops a work on the sound and vibratory phenomenon in the form of installations, performances, and electroacoustic and radio compositions. He approaches the notion of landscape by developing a practice of phonography, a sound version of photography.
www.rodolphe-alexis.info
www.ottoanna.com
www.vibrofiles.com

Experience the words of climate with Climate Memories

Mémoires Climatiques is a creation by Nathalie Blanc and David Christoffel produced by Ananke, in the form of a participative experiment proposed to visitors of the Berges de Seine. Each participant will be invited to poetically modify, with his or her own words, a series of scientific texts concerning the climate. A way to experience the problems of climate change and to consider perhaps differently the standard representations of nature.

Nathalie Blanc is a geographer and artist, director of research at the CNRS and director of the LADYSS UMR laboratory. His research concerns nature in the city and environmental aesthetics.
nathalieblanc.free.fr

David Christoffel is a poet (LMER: Le Monde Est Rond), composer and Doctor in musicology from the EHESS. Formerly a columnist for the Matinale de France Musique, he regularly hosts radio programs and workshops.
dcdb.fr 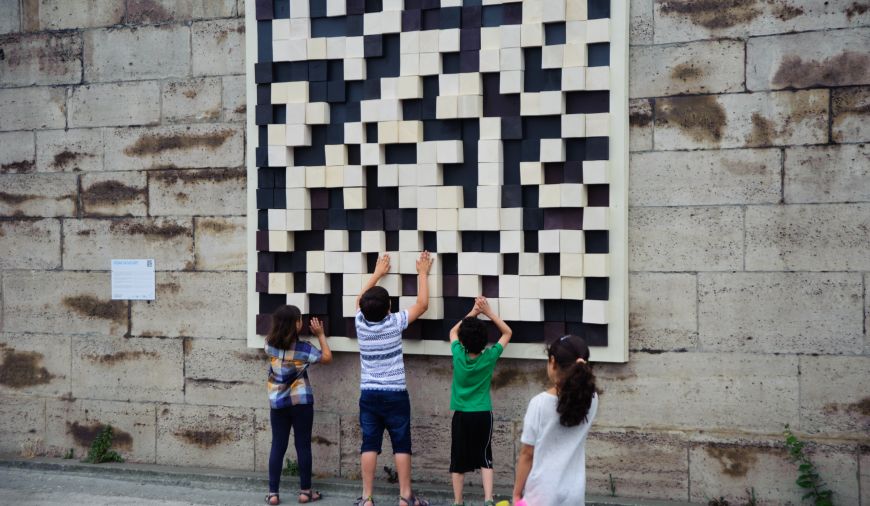 Connect to your environment with Urban Datascape

Meeting with the artist Olga Kisseleva and the creative team ofUrban Datascape: Etienne Delprat (architect) and Guillaume Jacquemin (computer scientist). An interactive installation that reveals the collective and systemic dimension of climate-related issues, through a journey in a virtual but no less real Paris.

Olga Kisseleva is an artist and researcher, founder of the Art&Science laboratory. It plays a pioneering role in the field of contemporary creation, research and reflection on emerging forms of creation. Olga Kisseleva’s work intertwines actions that take place in urban environments or in networks with interventions in galleries and museums.
www.kisseleva.org

The association Déchets d’arts animates two workshops for children about recycling and consumption. Create poppies with “Flower Power”, in order to flower the meadows of Le Bourget during the COP! With “La Vitrine Bleue”, objects diverted from the trash will be collectively covered with advertising posters to create a summary of our consumption petrified and sublimated by the gesture and the color.

The association Déchets d’arts has been developing a project combining art and sustainable development since 2006. Changing the way we look at waste through artistic metamorphosis is his original way of inducing eco-responsible behavior.
www.dechetsdarts.com

Discuss with artists the cultural issues of the COP21

What can art contribute to major political and environmental decisions? How to invent a new culture of ecology and nature? How can we act on an individual level in the face of such challenges? Questions that will be discussed with the artists of the ArtCOP21 festival. 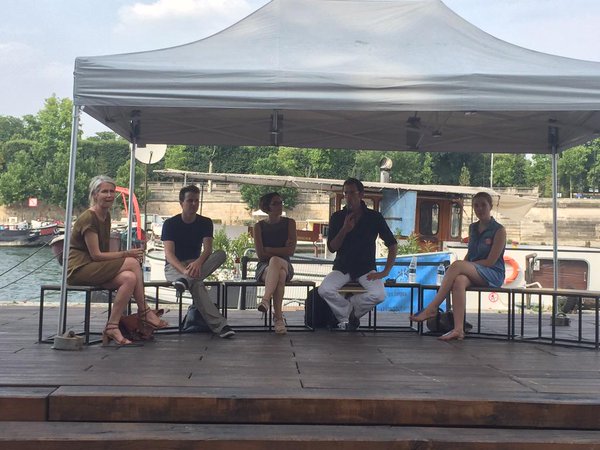 Find out about the COP21 with the Paris Climate Agency

Come and learn from the Paris Climate Agency about the issues at stake at the 21st United Nations Climate Change Conference (COP21) to be held from November 30 to December 11, 2015 in Paris. Prepare for climate change with the Paris Climate Agency’s “serious game”. This interactive game will allow you to learn while having fun! You will discover useful information on your daily actions and their impacts, on the energy renovation of condominiums and on the evolution of the climate in Paris in 2050…

And stay engaged with Ya+K’s Never Chill Out Van. and Bellastock

The NCOV is a caravan, icon of individual mobility, transformed into a mobile unit of production of festive and collective situation which questions the margin of appropriation of the public space and the capacity to produce the common. Entirely built from recycled materials, this mobile and subversive unit will vibrate to the sound of an inspired line-up.
July 11 from 6:30 pm to 10 pm and July 12 from 3 pm to 7 pm
Port de Solférino / in front of the Mikado Stage