Culture and Biodiversity Days in the Pyrenean Massif 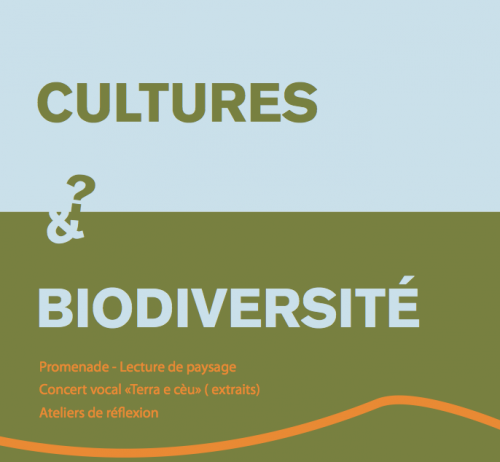 OCTOBER 24 AND 25 IN BAGNÈRES DE BIGORRE

Inventory, exchanges and multi-stakeholder reflections to define an action strategy for the Cultures and Biodiversity working group of the Pyrenean Massif.

The Ministry of Ecology, Sustainable Development and Energy, the Pyrenean Massif Committee and the Regional Directorate for the Environment, Development and Housing (DREAL) have set up the Pyrenean Strategy for the Promotion of Biodiversity (SPVB). Within this framework, a Cultures and Biodiversity working group was formed. This first workshop aims to bring together within the Cultures and Biodiversity group all the stakeholder organizations concerned with the management, administration and exploitation of the Pyrenean territory (researchers, botanists, breeders, farmers, companies, tourism companies, representatives of institutions in charge of territories, environment and culture, the Pyrenean National Park, cultural associations, artists) in order to share their experience in the field, to identify the expectations of each and to define together proposals for actions that will be presented to the Comité de Massif. The organization of this workshop was entrusted to COAL and SPEAP (Science Po’s experimental program in art and politics).

The objectives of the workshop

– To allow the main actors of the Pyrenean territory to meet, to share their experiences and to conceive a common project in favor of a better management of the ecosystems.
– To discover the best initiatives, organizations, territorial actions that work to bring to life a cultural approach to ecology and territories.
– To propose actions to the Pyrenean Massif Committee and to the Pyreneans.
– At the end of the workshop a synthesis will be proposed to the Pyrenean actors.

15.45
CROSSING THE LANDSCAPE
Meet at the crossroads of Boulevard de l’Europe and Route Labassère, Bagnères-de-Bigorre.

Thierry Boutonnier and Ralph Mahfoud, members of the program of experimentation in arts and politics of Sciences Po, restore in an original way the work carried out on the Pyrenean Massif at the request of the group “Cultures and Biodiversity” at the crossroads of the survey and the artistic intervention.

On Thursday, October 24th in Bagnères de Bigorre, the research group of SPEAP will restitute the results of its investigation by a reading of landscape carried out during a collective walk. Starting from an orientation table where the different maps and drawings assembled since November 2012 will be presented, a walk will take place around the urban and forest edges of Bagnères de Bigorre, where the agricultural and forestry activity is being transformed in a way that is legible and visible for the inhabitants. This walk will be punctuated by panels and sound installations that will help walkers share their diagnoses on the transformations of the Pyrenean Massif.

The routes, panels, rhythms and sequences of the restitution remain to be defined after a trip of location planned at the end of July in close agreement with the Town hall of Bagnères de Bigorre and the authorities of the Park. This walk will raise the questions underlying a cultural approach to territories and biodiversity in the Pyrenean Massif: how can we make mountain environments a model that is attractive for both production activities and tourism? How to reconcile the tasks of conservation of a natural heritage with the conservation, development and renewal of a cultural heritage? Finally, can we use the parks and the neighbourhood of the parks to invent new models of development and habitation of a territory?

The “Cultures and Biodiversity” working group has commissioned SPEAP to carry out a study of cultural practices on biodiversity, with a view to the conservation of mountain environments. Thierry Boutonnier (artist) and Ralph Mahfoud (political sciences and cultural mediation) multiplied the meetings with actors who create the landscape of the Pyrenees.

A survey device adapted to the subject was imagined: despite its history, the notion of heritage is not only an aesthetic notion, it is also economic and political. In order to detect the complexity, it is necessary to question those who are at the heart of the contradictions of these diverse heritages and who often find themselves in conflict over animals, landscapes, development and conservation. The survey consisted of asking researchers, botanists, breeders, farmers, neo-ruralists, institutional representatives, trainers and shepherds to represent the complexity of the evolution of the Pyrenean Massif as they could understand it, using maps and drawings. All of them proposed new tracks to follow the traces of a Pyrenean diversity in recomposition. Using the future of agriculture as an entry point, they addressed the issues of land pressure, the transfer of land, the centralization of the French state, the role of European subsidies, as well as the different ways of defining the concepts of landscape, culture and biodiversity.

10h00
WORKSHOP ON CULTURES AND BIODIVERSITY

11.00-12.30
Sharing experiences
Round table discussion led by the DREAL Midi-Pyrénées and Patrick Degeorges, in charge of emerging and strategic issues at the Directorate of Water and Biodiversity, Ministry of Ecology, Sustainable Development, Transport and Housing and Energy.

Five actors share their views and experiences on the challenges of a cultural approach to biodiversity in the Pyrenees.

Patrice de Bellefon, co-founder of the Biodiversity and Cultures Commission
Claus Sauer director of the Caza d’Oro and co-organizer of the program “Pyrenees: art and ecology in the 21st century
Suzanne Husky, artist having resided in Ariège
Bernadette Lizet, ethnologist, specialized in territories, biodiversity and food
Fernando Garcia Dory, founder of the Campo Adentro residency program. Video broadcast of her testimony.
Susana Velasco, artist who participated in the Campo Adentro program.

14.15 – 14.45
Presentation of the stakes and the territorial problematic from an environmental and cultural point of view
By Dominique Henry, landscape designer and teacher at Ensap Bordeaux

14.45 – 16.45
Group work
Conceived in a playful and participative way, this group work session aims to cross the word and the points of view of all the actors in reaction to the presentation of the context and the stakes, and in echo to the experiences
shared that morning. The work is based on the major cultural and environmental issues of the Pyrenean territory such as land use, climate change, local production, etc. The working groups are facilitated by the stakeholders, COAL, SPEAP and DREAL.

16.45
Restitution of the group work and writing of a summary note
The first lines of action defined during the group work will be presented to the members of the Massif Committee, the Pyrenean Strategy for the Valorization of Biodiversity and to all Pyreneans.

COAL, coalition for art and sustainable development, created in France in 2008, is an association that brings together professionals in contemporary art, sustainable development and research. COAL supports the essential role of creation and culture in raising awareness and implementing concrete solutions and contributes through its activities to the emergence of a culture of ecology.

As such, within the framework of a multi-year agreement with the French Ministry of Ecology, Sustainable Development and Energy, Coal participates in the implementation of an action strategy on the subject in France. COAL has designed and animates Ressource0 (www.ressource0.com), the first media and resource center dedicated to the promotion of national and international initiatives linking arts and ecologies. COAL also accompanies the Department of Essonne in the implementation of the new artistic project of the Departmental Domain of Chamarande around the sustainable culture.

SPEAP is the first program to combine the arts and social sciences in equal measure. The objective is to confront specialists in the latter, but also practitioners from the public or private sector, with the characteristics and methods of artistic training and, conversely, to offer artists a high level of training in social sciences. However, this is not really about science, politics or art. These disciplines are not studied one after the other. They converge, around common objects, in a set of teachings, pedagogical experiences and new work devices, coming from both scientific and artistic approaches, both being thought not in parallel but together and collectively. Whether they are students or speakers, what they already know is less important to us than the journey we will take together. This is why the training is based on many interactions, moments of reflection and exchange, and also disagreements, which are part of SPEAP’s identity.

SPEAP is a laboratory for scientific, artistic and pedagogical experimentation, which is part of the pragmatic tradition – in the sense of this movement illustrated, essentially in the United States, by the works of William James, Walter Lippman and especially John Dewey, and by their contemporary emulators. Here, young professionals from different backgrounds confront their knowledge and methods on concrete problems posed by society, put their certainty to the test of reality, exchange, doubt, grope, discover and reflect on the consequences of their interventions.

The challenge is to succeed in observing, reporting on, and exploring together how it is possible to create a shareable public space and new forms of expression for political, economic, ecological and/or scientific, and necessarily controversial issues.

Born in the South-West of France, Thierry Boutonnier develops things around the very broad question of domestication. He grew up on his parents’ dairy farm and worked as a farmhand to finance his studies at the National School of Fine Arts in Lyon and Concordia University in Montreal. Graduated in 2005, and trained in 2010 at the Institute of Ecological Engineering and Eco-Development, he creates objects in interaction with ecosystems through multiple cooperations. As for Lausanne Jardin (2009), Naturel Brut (2010) or Polyculture (2011), his work has been shown in Canada, in Europe, at the Biennale de Paris (2006), at the Biennale de Rennes (2010), at Fiac (2011), at the Centre d’Art Contemporain du Domaine de Chamarande and at the Cité des Sciences (2012). In 2010, he was awarded the COAL Art and Environment Prize for his project “Take roots” in Lyon, which is still going strong.

After an academic training in cultural mediation and political science, Ralph Mahfoud spent two years in Beirut where he researched experimental music from the Middle East, with the aim of creating a sound archive. He organizes auctions to finance cultural and humanitarian associations, and begins in April 2013 an internship at UNESCO within the Lebanese delegation. He is also pursuing a professional project that consists in developing the cultural structure within Arab diplomatic entities.

Terra e céu is a vocal show mixing traditional repertoire and contemporary musical creation. This show is written from texts and poems in Occitan by the composer Jean-Pierre Seyvos, with the collaboration of the choreographer and director Mahony Kiely, for 7 professional singers – the men’s ensemble Vox Bigerri, directed by Pascal Caumont, and the singers Geneviève Clément-Laulhère and Anne-Laure Touya – with the participation of the choirs “L’air de rien”, directed by Olivier Capmartin and “A fleur de voix” directed by Hélène Caulet.

This project, which evokes the relationship between a culture and its territory through Occitan literature from the 13th century to the present day, is also an attempt to show how musical expression listens to its environment – natural, cultural, social, symbolic – and is affected by it.

Terra e céu is the song of a world that is given to hear. A song that does not only tell a landscape and its reliefs, a tradition, a poetic sound universe, but a song that questions these dimensions. A song that questions culture and territory, the links to the past, to the inhabitants, to tourists, to animals, to borders and to the world of today.