How to think or rethink ecology today? While the climate and environmental emergency has been declared,
The French Embassy in Beijing and the French Consulate in Shanghai
are collaborating to build a small library of the environment, ecological transition and biodiversity as it is intellectualized in France.

This series of texts by French intellectuals will be translated into Chinese and published on our networks before being relayed by our media partner
The Paper
.

This week, the floor is given to Loïc Fel, Doctor of Philosophy from the University of Paris 1 Panthéon-Sorbonne, CEO of the agency influence for good, and co-founder of COAL.

At a time when humanity is facing a global and systemic crisis, as much ecological as economic, social and governance, it is looking for a future model that reconciles the benefits of development inherited from the industrial revolution with a society that is more just, more equitable and harmoniously integrated into the biosphere.

Until now, alarmist speeches have tended to slow down the optimism necessary for mobilization, and purely political approaches (global COP negotiations for example) or purely technological approaches (development of more virtuous industrial means) are disembodied, far from the daily life of citizens and insufficient for the necessary transformation of our lifestyles.

In fact, each profound change in our civilization was matched by an imaginary vision of what the world would be like afterwards. An imaginary that is specific and positive enough to motivate citizens to change and to implement the efforts necessary to achieve that change.

Today this imaginary, a common construction resulting from the reflections of artists, philosophers, scientists, but also, of course, from popular movements, citizen and associative commitment, is beginning to show some main lines such as happy sobriety instead of consumerism a consultative and peaceful local democracy adapted to the realities of the territories rather than centralization and exacerbated nationalism, an integration of man and his activities in a preserved environment rather than a separation of the two universes and the exploitation of the resources of one for the other in a linear way.

But these broad outlines need to be embodied in the vision of a daily life, on the scale of the individual, to build a new mobilizing utopia. And this work of a common imaginary is very exactly a cultural question, mobilizing the diversity of the contemporary artistic expressions to produce the representations or to propose the experience of it.

This idealistic imaginary, as in various times, always keeps in filigree that of a mythical golden age, a time when the daily life would have embodied the values of equity, of sober but deep happiness, of inclusion in the nature etc. A utopian imaginary without any historical reality that, in order to have more body, has over the centuries been attached to a region, which has become the symbol: Arcadia.

The imaginary of Arcadia, in spite of the risk of pastism that it could induce, offers a structure for imagining the expected new model. However, the ethereal imagination is no longer sufficient in the face of the finitude of the world and the resolutely physical and concrete aspect of the challenges facing humanity today. Also, utopia today must be proven, embodied in a place, and be pragmatic. But doesn’t this embodiment risk making each project appear fragmented or anecdotal in relation to the issue at stake? How to achieve a global imaginary of the sustainable world?

The project of imagining a global future Arcadia, while pragmatic and concrete, is difficult to approach as a whole. It is thus from various points of entry, and in a perspective on the scale of the individual, that the contemporary artists involved explore this project of civilization.

An experimental method for the lived experience

To do this, these artists seem to develop a methodology of creation that we find more or less in most of the projects. The projects concerned are not limited to the production of an object, a work, but are defined as processes. Moreover, most of these artists claim the heritage of Joseph Beuys and appropriate the idea of social sculpture. These projects are located and adapted to a territory. They are generally participatory, eco-designed, of sober aesthetics, and performative, in the sense that they “do” something. Take for example the STUWA contemporary art trail developed in the Sundgau region in southern Alsace. Since 2015 each year 7 different communes among the 112 of the territory welcome an artist in residence from a project. The latter works with a local referent, stays in the home, sources its materials locally, mobilizes volunteers, and produces a project that explores one of the issues of sustainable development. For example in 2016 the work of the collective the new neighbors named Gemütlichkeit embodies this methodology. Indeed, the artists started from the question of the building, which alone represents 23% of the total CO2 emissions in France and the major part of waste production. They capitalized on the vernacular architecture of the half-timbered house by updating it to be more efficient from the point of view of sustainable development, both by integrating recycled and new local materials, sometimes unexpected like plastic scraps instead of tiles, but also foreign techniques like burning the wooden structure of the half-timbered house, a Japanese technique that ensures the durability of wood. This demonstrative work has brought together a dozen local companies and allows us to imagine future proposals for construction, the work of art having served as a pretext for developing and experimenting with these new techniques and new materials. 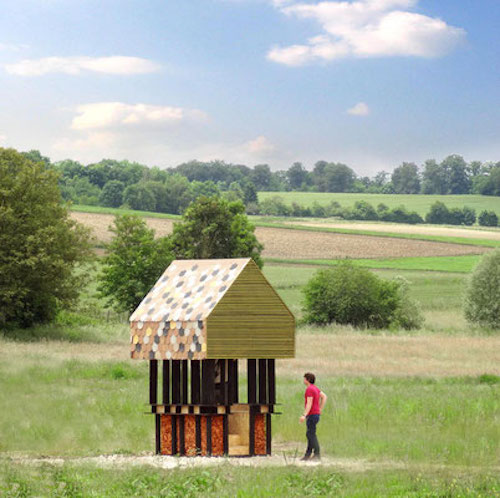 Thinking about a retro-future for a society project

The future that emanates from these projects has the particularity of both projecting towards the future, while rehabilitating aspects that seem to belong to the past, before the industrial revolution, and resolutely situationist, far from the idea of globalization. It is in this sense that a new Arcadia is taking shape, a form of “retro-future”, far from the usual futuristic imaginary.

The artists’ projects on this sustainable future are intended to be symbolic, in accordance with the precept “think global, act local”. Indeed, one of the difficulties in defining a new sustainable Arcadia is that it cannot be universal in its application. What is sustainable here is not necessarily sustainable elsewhere, depending on local resources, social and cultural specificities, etc. Conceiving an imaginary world with principles such as those outlined in the introduction, embodied in works that respond to a local context, does not facilitate everyone’s projection into the future. The cycle of exhibitions “Act Global, Think Local” at the Centre Européen d’Actions Artistiques Contemporaines in 2015 and 2016 explores precisely this contradiction between the necessity of a universal Arcadia, but at the same time its permanent reinterpretation here and now, everywhere… This cycle, which brought together more than twenty European artists, proposed to the visitors to reappropriate the world, at its scale, to become an actor, whether on the CO2 market with Amy Balkin, a barter system around Nicolas Floc’h, or the food production with the collective Art-Act, etc…

Far from the idea of globalization, this imaginary world has to face a particular and new difficulty by oscillating between “low tech” and “high tech”. Indeed, artists who imagine a post-carbon world, and therefore post oil, gas and coal, face likely restrictions such as for transportation, with fossil fuel replacement technologies slow to come. Restrictions on mining resources and therefore on certain everyday equipment, and finally contextual restrictions, depending on local resources. This is the first time that an imaginary of a better tomorrow includes a retreat from something, and not just a development… That’s why this imaginary is sometimes confusing. For example, Laurent Tixador experiments with this idea in a radical way with his transitory architectures. He invests alone and without any material a space, like a forest, then creates tools from the materials of the site, makes a shelter and little by little develops his level of comfort.

But at the same time, this future cannot be free of the cutting-edge technologies that will enable us to adapt to climate change, as long as they do not depend on dwindling resources. Biotechnologies and nanotechnologies, for example, populate the imagination of this future, as in Alexis Rockman’s paintings, and can also frighten the public.

However, it is indeed an Arcadia that is taking shape with an urbanism where food production and vegetation is included, where comfort is based on ecosystem services, in a more sober but more pastoral society, less frenetic and fast. This was demonstrated, for example, by the Vivre(s) exhibition at the Domaine de Chamarande in 2014, which brought together artists’ proposals on the food of the future, combining the rediscovery of ancient tastes and varieties with modern production methods. For example, the work of the Safi collective called Glace Royale consists of producing 3 flavors of ice cream from plant resources of the domain with a local ice cream maker, then commercialized with a bicycle-ice cream maker designed by the artists. A symbolic experiment in the relocation of production, this work conveys an imagination that includes the notion of pleasure, an idea that is essential to enhance the simpler and more “pastoral” future of the new Arcadia, which does not lose quality of life.

This question of the quality of life and the choice of society that we must make, for a new Arcadia for example, is what the project HAPPY OWNERS: the unreal estate agency explores. Happy Owners is a fictitious real estate agency that takes real estate advertisements at their word by imagining a city where nature would reassert itself, in a poetic context.

The artist Soazic Guezennec, creator of the agency, imagines exuberant creations where buildings turn into waterfalls, mushrooms invade the city, and mountains fall from the sky. To make this utopia credible, the projects are described in the classic media of real estate communication: videos, brochures, plans, models and advertising posters.

The projects are displayed in a professional environment, to create confusion with already 10 agencies opened in India, one in Istanbul and soon in New York.

Each agency is a space for discussion that questions the idea of nature. Visitors are invited to express their desires and dreams of habitat, and are encouraged to become members of the community of these dream constructions.

By whatever entrance we consider the imaginary of a sustainable future, it reveals itself of a great complexity and even a paradoxical structure that does not facilitate its capacity of attractiveness to mobilize the publics. This is why it is time today that artists seize it beyond the experiments to propose a syncretic vision of the future. It is now probably up to the great makers of narratives, such as novelists and filmmakers, to project us into a global vision of this future of a happy ecological transition, of a new Arcadia.

To read
in French and in Chinese on