Lucy + Jorge Orta at the Grand Palais with COAL 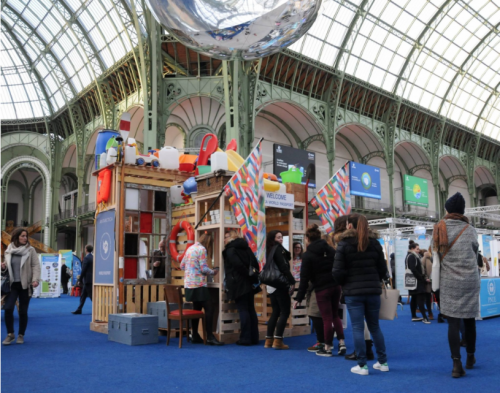 During the COP21, the artists Lucy + Jorge Orta presented at the Grand Palais, with the support of COAL, a new distribution office for Universal Antarctic Passports. Each visitor was issued a passport in exchange for signing a charter of commitment to environmental protection, respect for people and peace.

The Antarctic Universal Passport is the result of a set of experiences and reflections by Lucy + Jorge Orta that came out of their trip to the Antarctic continent in 2007.

Since the signing of the Antarctic Treaty in 1959, which removed Antarctica from all territorial claims, this continent has become a land of peace, science and international cooperation. Its immaculate landscapes have also become the symbol of climate change, a global phenomenon that knows no borders and affects all regions of the world without distinction.

Faced with this phenomenon, Lucy + Jorge Orta reaffirm, with their work Universal Passport Antarctica, that our response to climate change must also be universal and without borders. Based on the model of a real passport, the Antarctic Universal Passport can be issued to anyone who wishes to become a member of a global community without borders, in exchange for their commitment to environmental protection, respect for people and peace.

For the COP21, Lucy + Jorge Orta have imagined a new Antarctic Universal Passport Distribution Office to issue tens of thousands of passports to as many visitors who have been invited to participate in this global action. An online platform (www.antarcticaworldpassport.com) allows this community, which already has more than 50,000 members, to be brought together.

The Antarctic Universal Passport, a collaborative and engaging work that has travelled around the world, highlights the urgency of taking into consideration the people and communities affected by the consequences of climate change and allows for a symbolic commitment to safeguard the environment on a global scale.

The Antarctic Universal Passport can be issued to anyone who wishes to become a member of a global community without borders and who commits to :

– Acting in favor of sustainable development through simple daily gestures.
– Defend threatened environments as common goods of humanity.
– Fight against climate change generated by human activities.
– To support humanitarian actions in favor of displaced peoples.
– Share values of peace and equality.
– Keep your passport, a symbol of your commitment, and present it on all occasions.
– And, Pass this commitment on to future generations. 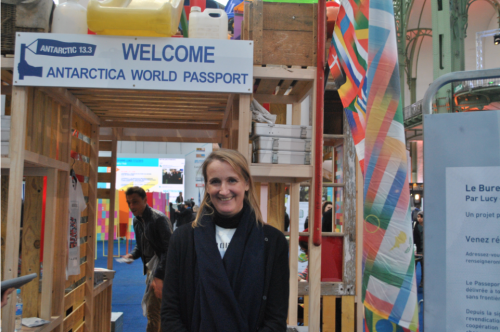 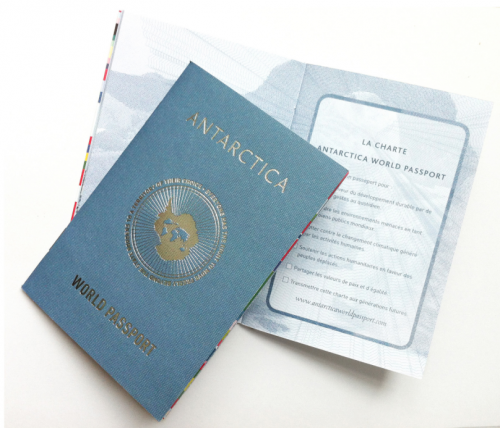 Since the first global edition of the Universal Antarctic Passport was released in 2007, tens of thousands of citizens around the world have come together to address the challenges we face. The goal is to reach 1 million registrants. Thus, the Antarctic community will have the right to request and initiate a legislative proposal, through the European Citizens’ Initiative.

ANTARCTICA, A LARGE-SCALE PROJECT LED BY LUCY + JORGE ORTA SINCE 2007

In 1995, Lucy + Jorge Orta presented the concept of Antarctica World Passport at the XLVI Biennale in Venice, Italy. In 2007, they embarked on an expedition to the Antarctic continent to install their ephemeral work “Antarctic Village – No Borders” and put up the flag of Antarctica, a supranational emblem of Human Rights.

Through this project, the artists explore the underlying principles of the Antarctic Peace Treaty as a symbol of the unification of the citizens of the world. In this pristine environment, “Antarctic Village – No Borders” embodies all of humanity’s desires and spreads a message of hope to future generations.

With the worldwide distribution of the passport, Lucy + Jorge Orta have created a major art project that demonstrates a strong and collaborative social commitment. 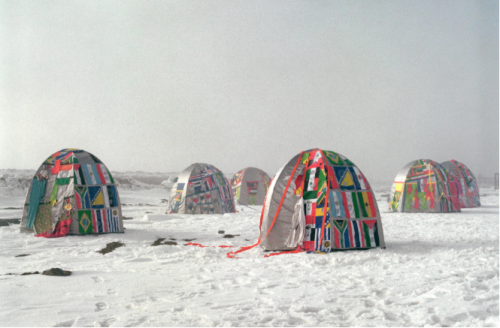 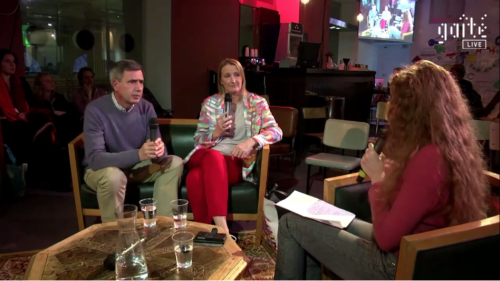 Lucy Orta and Jorge Orta are internationally renowned artists. They have been working together at Studio Orta since 1992. Their collaboration explores the major concerns of the 21st century: biodiversity, water, food, climate change, social justice and exchanges between peoples. The artists use a wide variety of media: drawing, sculpture, photography, as well as ephemeral interventions and performances. Internationally recognized, the Orta’s works have already been the subject of numerous monographic exhibitions, publications and public and private acquisitions throughout the world.

The most iconic series are: Refuge Wear and Body Architecture, about minimal portable habitats halfway between architecture and clothing; HortiRecycling, about the food chain in global and local contexts; 70 x 7 The Meal, which takes as its theme the ancestral ritual of dining and its social role in community networks; Nexus Architecture, which imagines alternative modes of operation for establishing social connection; The Gift, a metaphor for the heart and the biomedical ethics of organ donation; Ortawater and Clouds, whose works address the scarcity of water, a vital natural resource that is often overused, and the problems arising from pollution and its privatization; Antarctica, which focuses on international human rights and greater freedom of movement; and Amazonia, on the value of the natural environment in our daily lives and the survival of the planet.

In 2007, the artists received the Green Leaf Award offered by the United Nations Environmental Program in partnership with the Natural World Museum at the Nobel Peace Center in Oslo, Norway, for their artistic excellence and environmental message.

In parallel to their practice, Lucy + Jorge Orta founded Les Moulins, an artistic research center to revalorize industrial heritage through contemporary art (Assocation loi 1901). This exceptional site is located near Paris, in Marne-la-Vallée, in the valley of the Grand Morin over an eight-kilometer stretch of land. It includes four historic mills: the former Papeteries de Paris mills, Le Moulin de Boissy and the Moulin Sainte-Marie; La Laiterie and the Moulin de la Vacherie. Workshops and artists’ residences are being rehabilitated, as well as a sculpture park, to promote the production and dissemination of experimental works in-situ.

FOR MORE INFORMATION ON THE PROJECT: