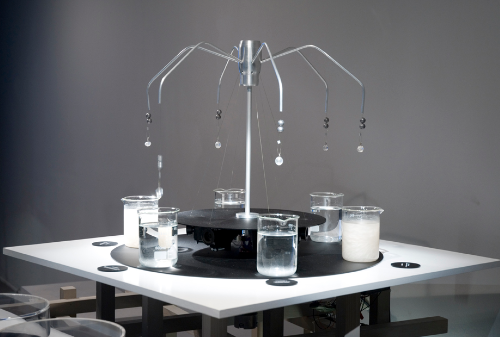 In an era of accelerating pace, where productivity, transportation and biological rhythm are subject to the imperatives of efficiency and profitability, our concept of time deserves to be questioned. The exhibition “Le temps au temps”, which brings together ten international artists, established or emerging, who have made sustainable development issues one of the axes of their creation, invites us to slow down and meditate with sensitivity on the times that are ours.

From the disposable plastic supermarket bag sublimated by a goldsmith’s work proposed by Baptiste Debombourg in association with David Marin(Marx, 2012), to the invasive plants of Charlie Jeffery(Office of imaginary landscape, 2014), the exhibition “Time to time” reveals the preciousness and the value of the time of the creation The event also provides an opportunity to discover Jérémy Gobé’s hybrid corals(Corail Restauration, 2012), mixing the natural with the manufactured, and a miniature pearl production factory (Emile De Visscher, Pearling, 2013), a problematic substitution of the mechanical with the organic.

The time of circulation, both that of computer data and that of people, also serves as inspiration for the artists in the exhibition. The Russian duo Recycle Group makes luminous sheaths spring from the ground, a metaphor for the multiplication of social networks(Ground Content, 2013), while Lionel Sabatté sculpts wolves using the dust generated by the passage of users of the metro at Châtelet station(La Meute, 2011).

The exhibition “Time to Time” is the representation of a world where time, in turn, unfolds, is interrupted, moves forward, backward, sometimes forgetting humanity in its race. Rhythmic by the crystalline music of a mulberry tree ring (Scenocosme, Echoes(2011), the exhibition is presented as a suspended moment, like a depopulated Paris imagined by Lucie & Simon in their film Silent World, Place de l’Opéra, Paris (2012-2013), conducive to contemplation and the awakening of a forgotten slowness, that of the hand, of nature, and of life.

The visit of the exhibition “Time to time” is also measured by clocks as inventive as incongruous, like the Berlin artist Mark Formanek (Standard Time(2009), which creates a digital clock activated by 70 workers during 24 hours, or the Russian-born artist Olga Kisseleva, who presents for the first time her work Tweet Time (2014), a clock whose time moves backwards as users of the social network demonstrate their lack of time.