FIKOS IN MARSEILLE FOR THE WORLD NATURE CONGRESS

Art Climate Transition, COAL and Planète Emergences present a monumental fresco of the artist Fikos in Marseille, to accompany a citizen mobilization, creative and committed to the erosion of biodiversity and the mass extinction of birds. This fresco is realized within the framework of the Walls of Audubon and was inaugurated during a day of meetings, on September 5, 2021, in partnership with the OFB, the LPO and the magazine Billebaude, and during which Allain Bougrain-Dubourg, president of the League of Protection of the Birds, made us the honor of his presence.

Inauguration of a committed mural

The work unveils some of the Mediterranean and migratory bird species, including some taken from Jean-Jacques Audubon’s drawings. Inspired by this great ornithologist and illustrator, Fikos brings his personal touch with his style and his colorful paintings. Some details, such as the Greek explorer Pytheas of Marseilles, add to the work a historical and humorous side.

Among the birds represented, American birds such as the “mountain mockingbird” and the “American nutcracker”, both on the right of the fresco, and Mediterranean birds: the “eared traquet”, a black and white passerine that lives in the rocky hills, the “hoopoe” (recognizable by its tassel and long curved beak) or the “blue monticole”, which climbs quite high in the mountains, but can also be seen in Corsica on the seashore.

Making visible the dramatic extinction of birds is a symbol and a unifying struggle, both politically and poetically. Birds, with their songs and colors, universally illustrate the diversity, the richness of nature and an emotional relationship with the living.

Words that are also committed

In turn, Lauranne Germond of COAL, Caroline Séguier of Planète Émergences, the City of Marseille, the French Office of Biodiversity, Allain Bougrain Dubourg of the League for the Protection of Birds, and Anne de Malleray of the magazine Billebaude (François Sommer Foundation, Glénat editions) spoke about the challenge of mobilizing, through culture, on the mass extinction of birds.

” Through art, we participate in the protection of the environment ” – Allain Bougrain-Dubourg, President of the League for the Protection of Birds

Artist Marine Douet Ortiz offered workshops on painting birdhouses with vegetable paint. Workshops of creation of plant painting were also conducted from August 23 to September 3, with the marine artist Douet Ortiz at the Center for Housing and Social Reinsertion managed by the association Hpf, and at the foot of the Saint-Charles station. These workshops allow the learning of vegetable transformation (inks, balms…) and the realization of sketchbooks, samples and recipes.

Anne de Malleray, coordinator of the magazine Billebaude, presented us the last issue of the magazine, dedicated to the birds of prey, around a cocktail cooked by the Écomotive café, located at the foot of the fresco. Billebaude magazine is a biannual magazine of exploration and reflection on the uses and representations of nature, launched in 2012 by the François Sommer Foundation and Éditions Glénat. She approaches biodiversity issues through the prism of scientific ecology, art and anthropology. 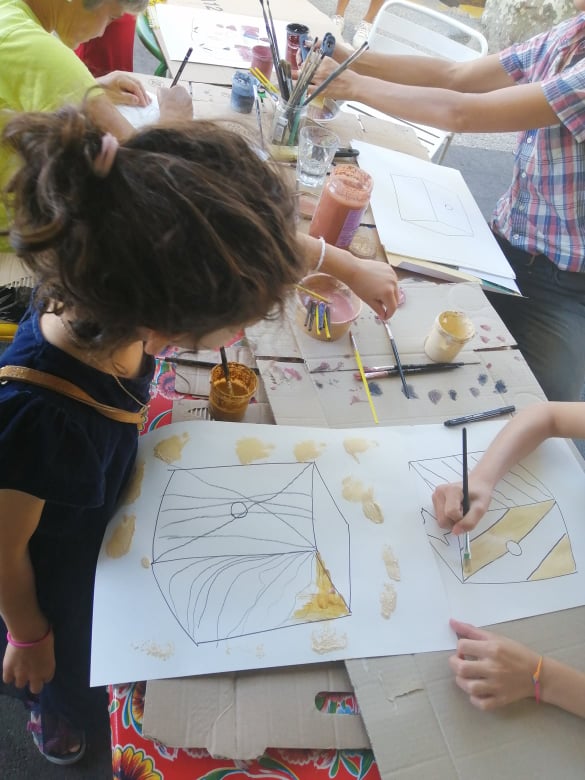 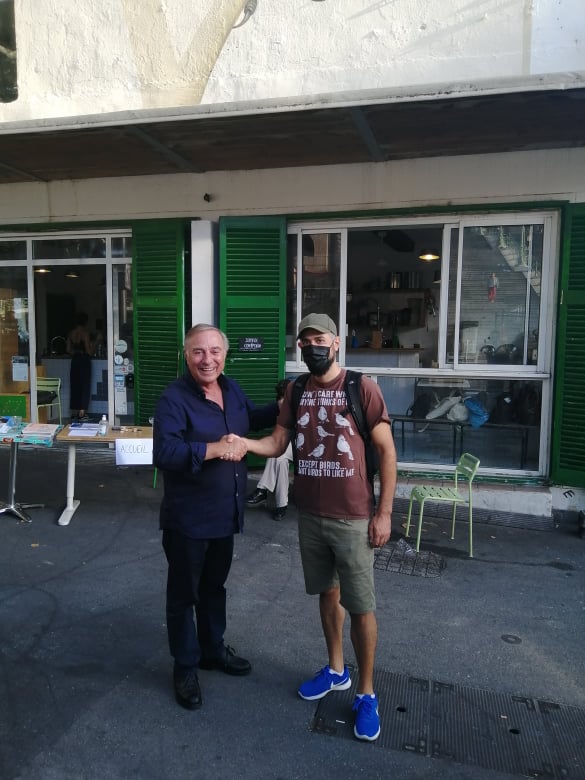 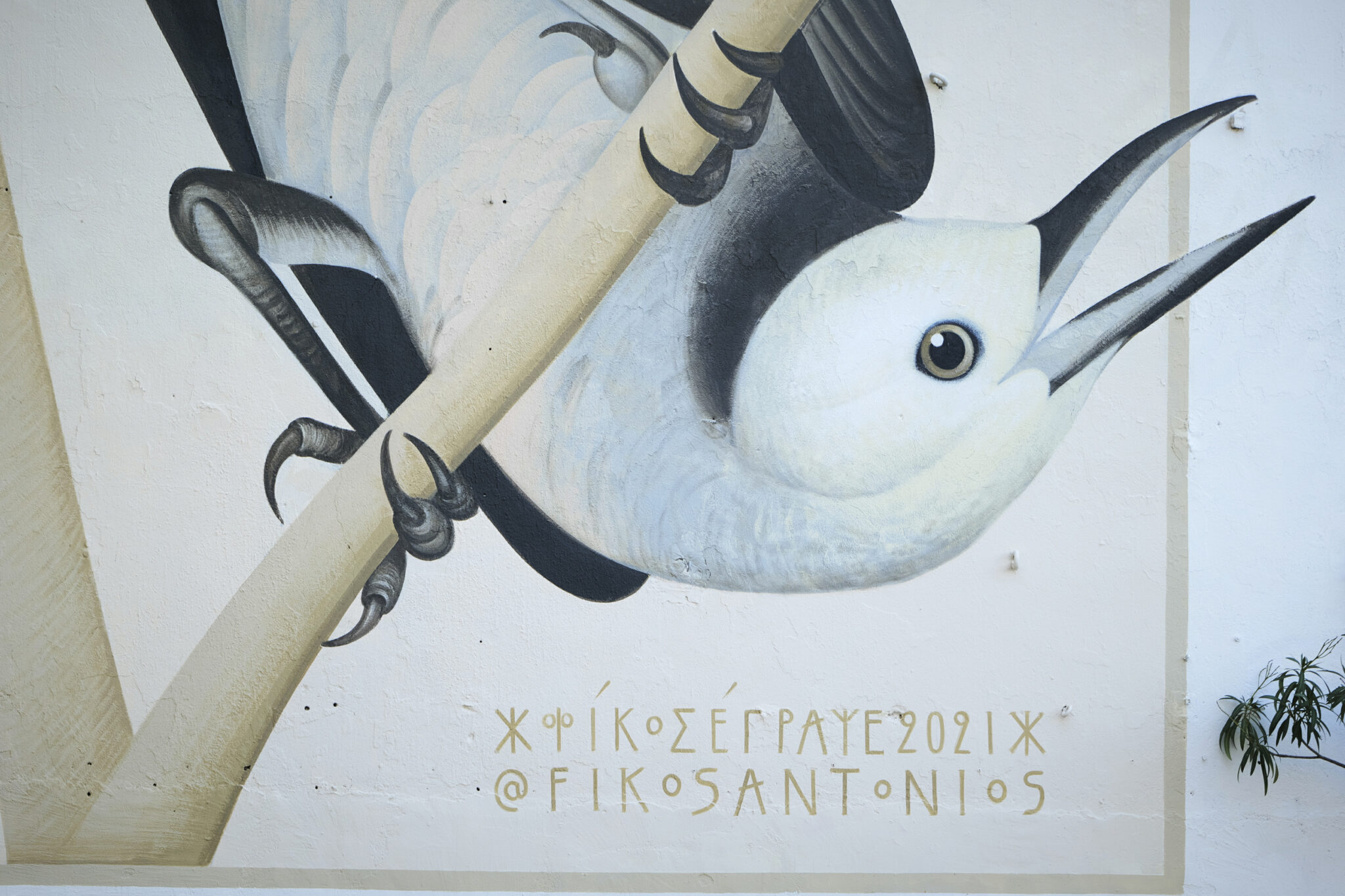 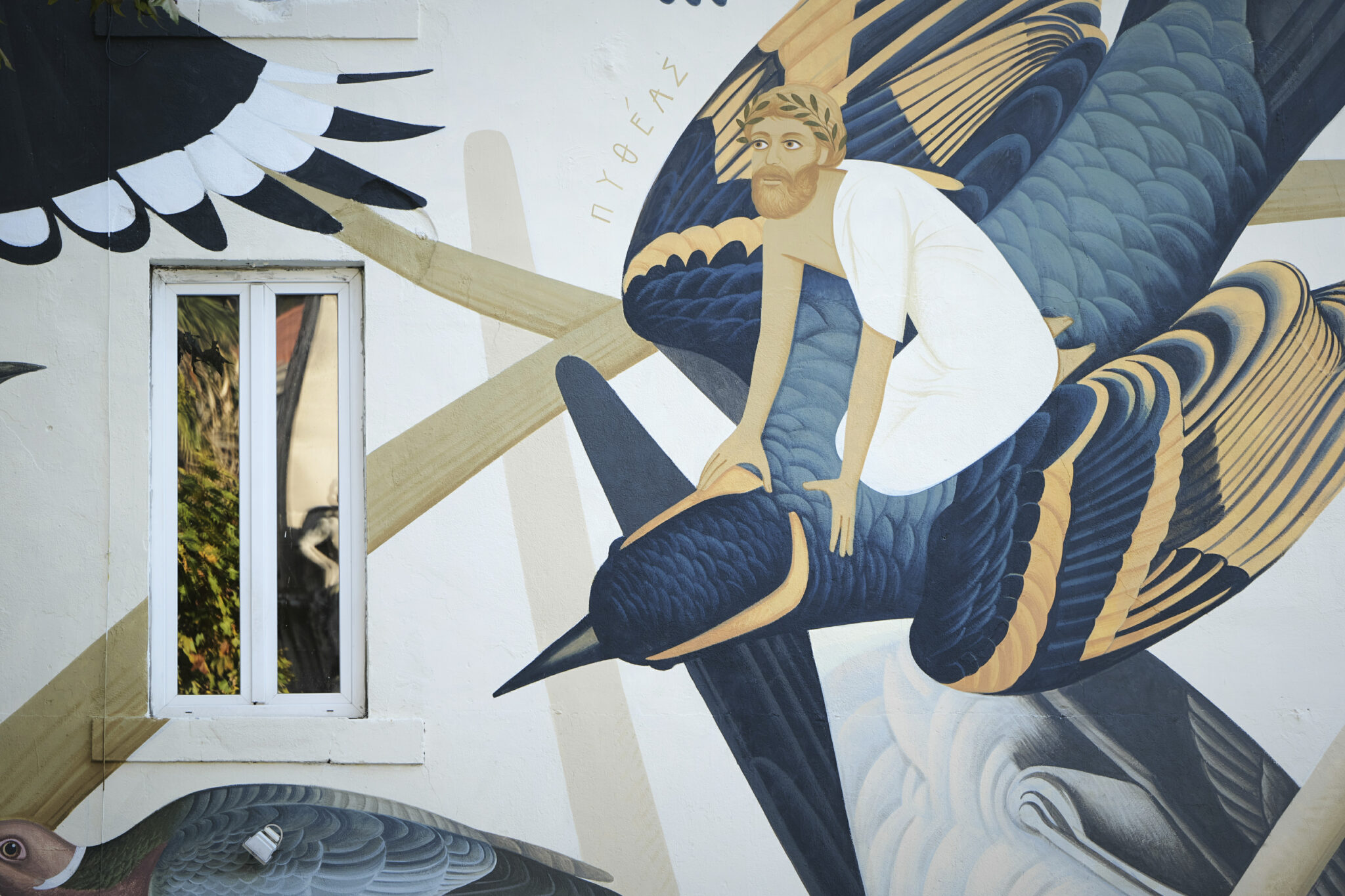 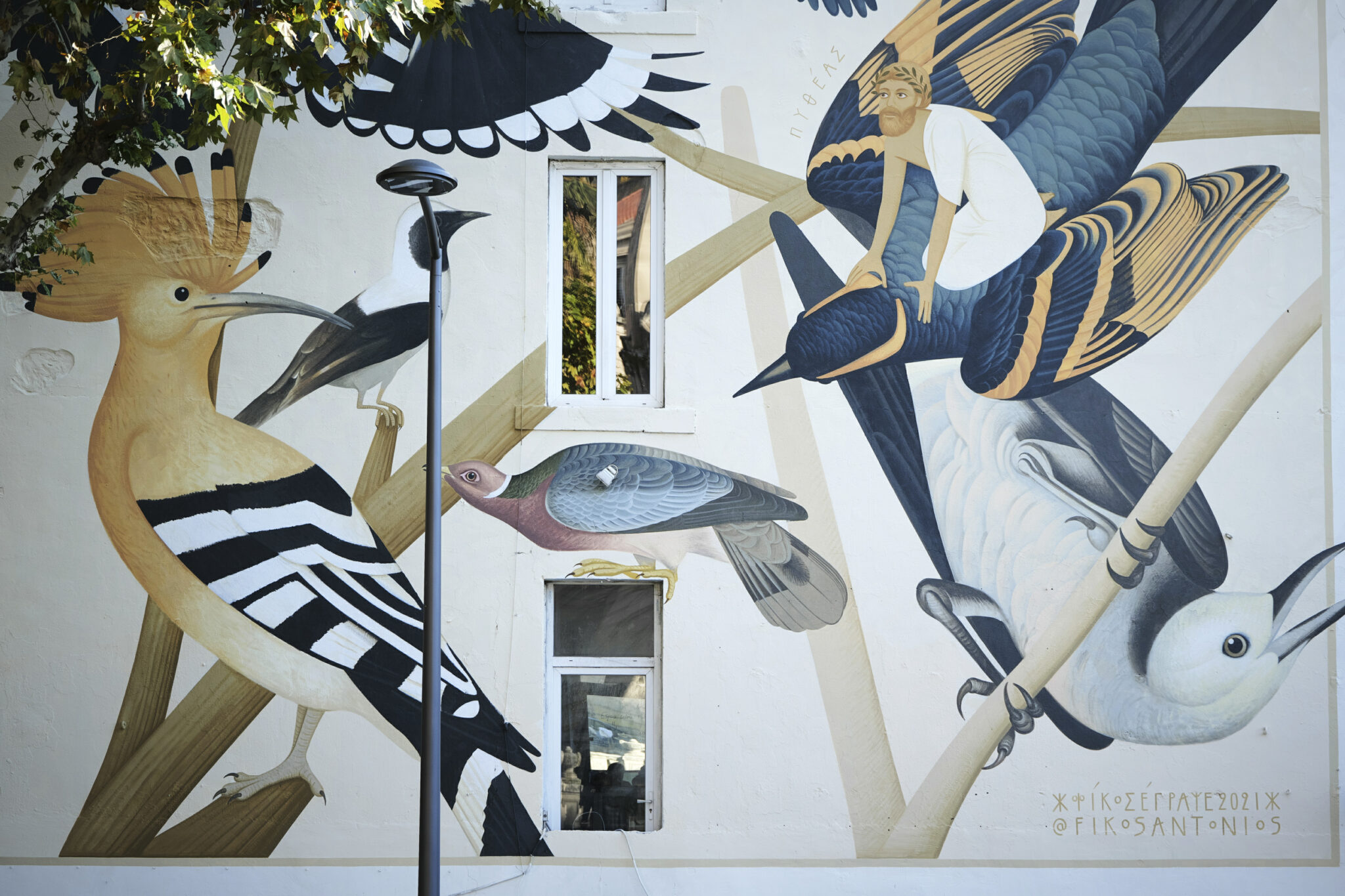 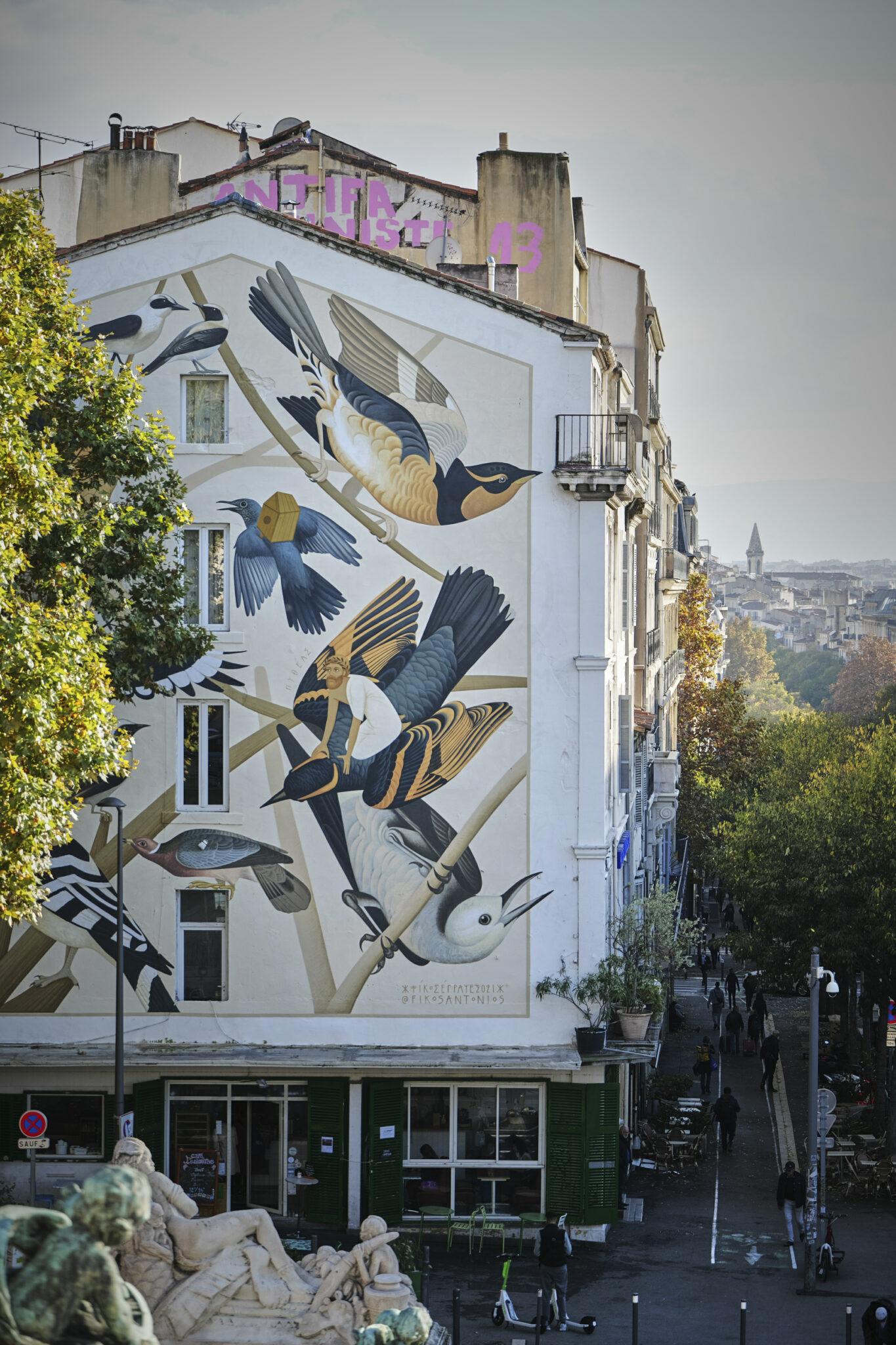 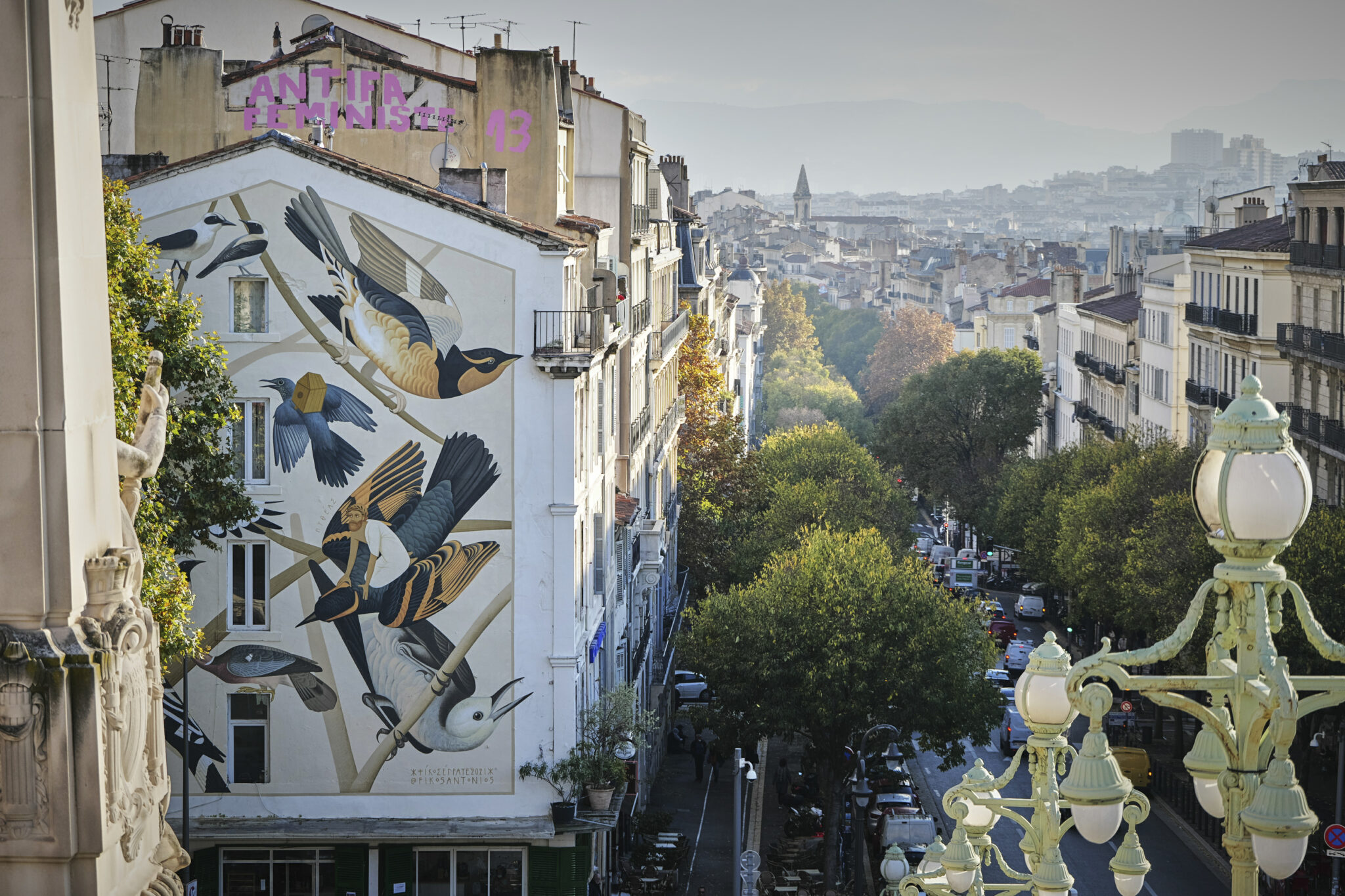 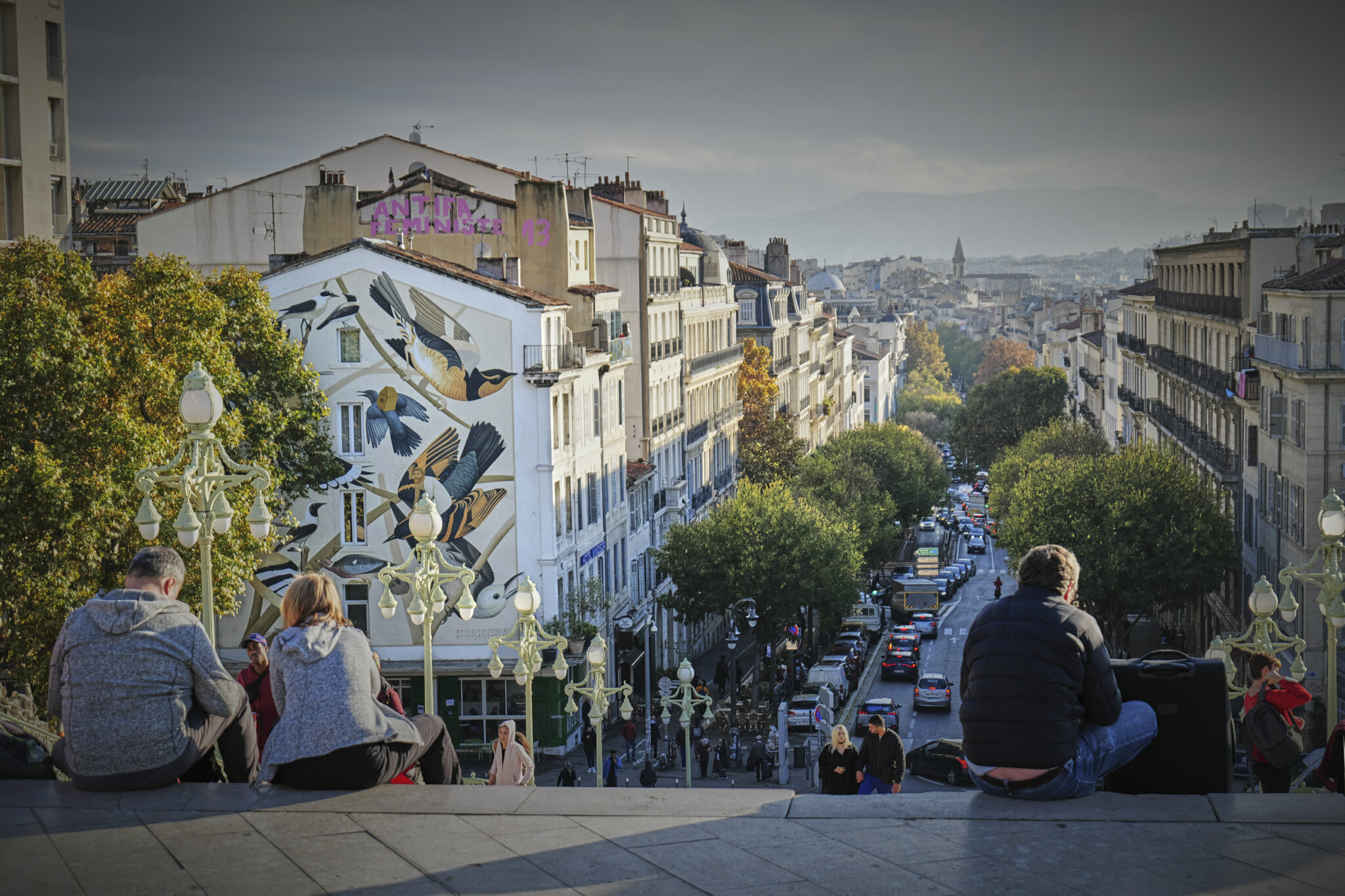 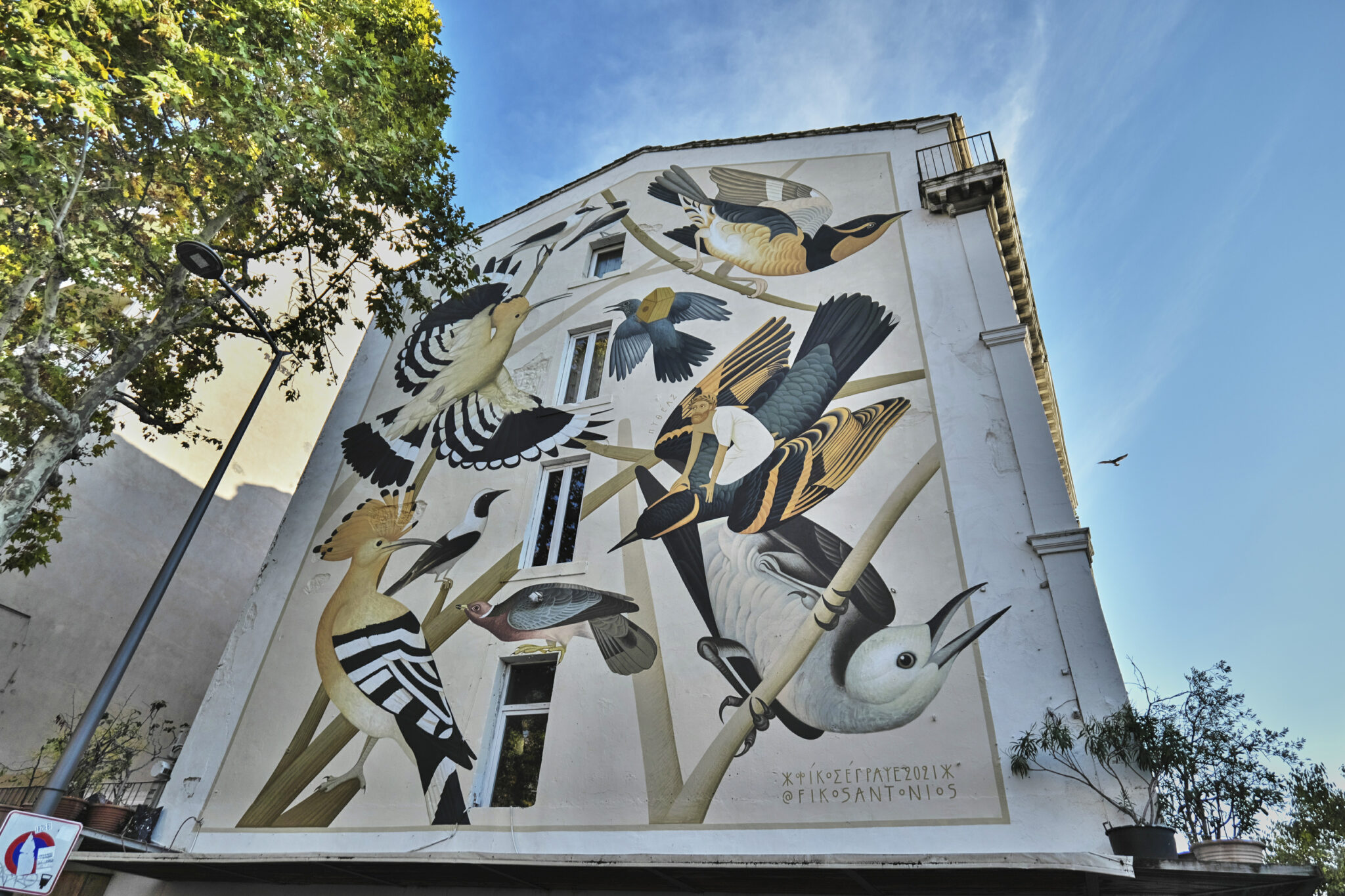 An XXL fresco at the Gare Saint-Charles

The work of the artist Fikos, due to its high visibility from the Saint-Charles train station, on the facade of the Écomotive Café, at the corner of the Place des Marseillaises and the Boulevard d’Athènes, thus reaches a large audience on the issues of biodiversity.

Among the birds represented, American birds such as the “mountain mockingbird” and the “American nutcracker”, both on the right of the fresco, and Mediterranean birds: the “eared traquet”, a black and white passerine that lives in the rocky hills, the “hoopoe” (recognizable by its tassel and long curved beak) or the “blue monticole”, which climbs quite high in the mountains, but can also be seen in Corsica on the seashore. 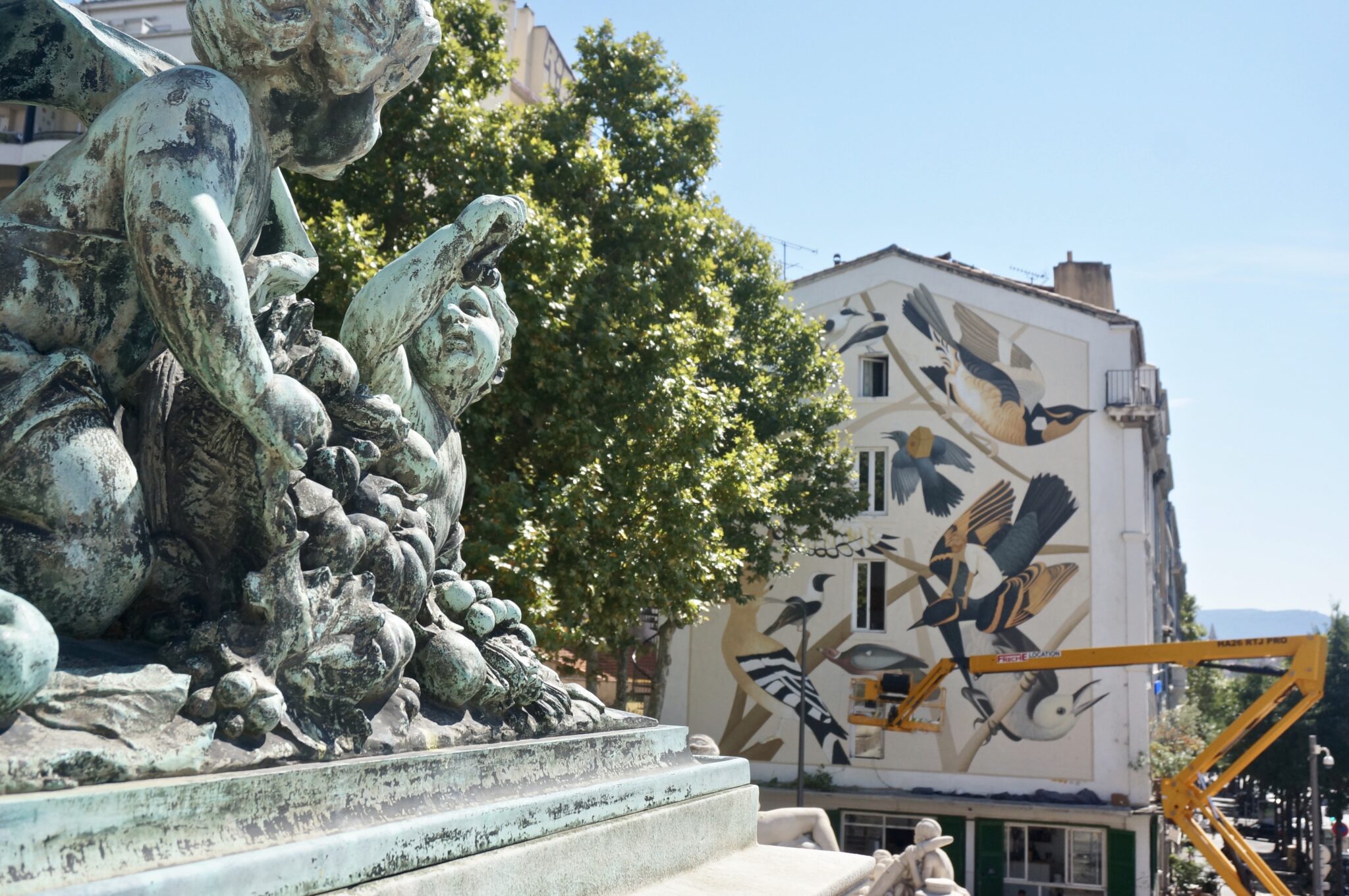 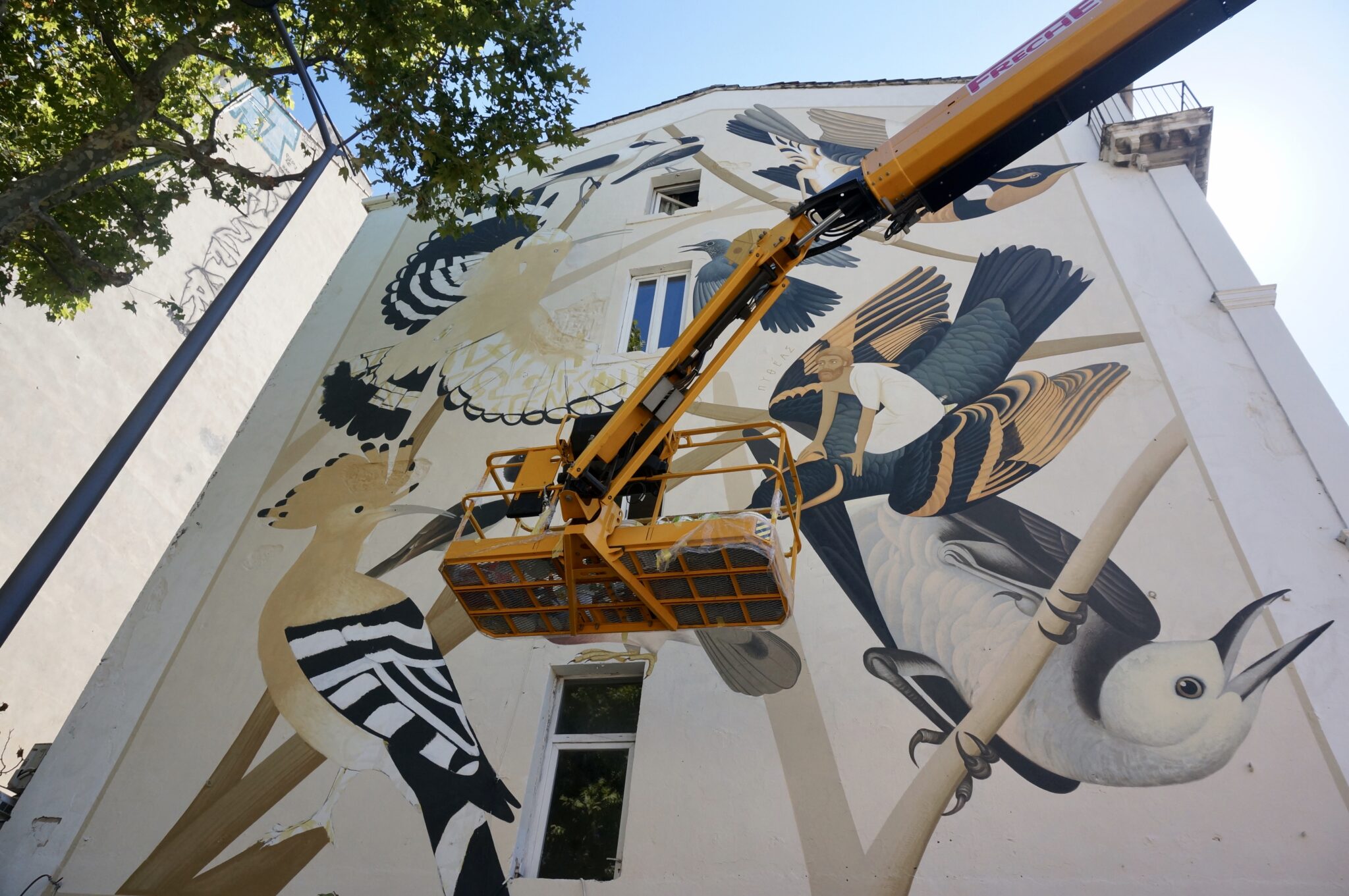 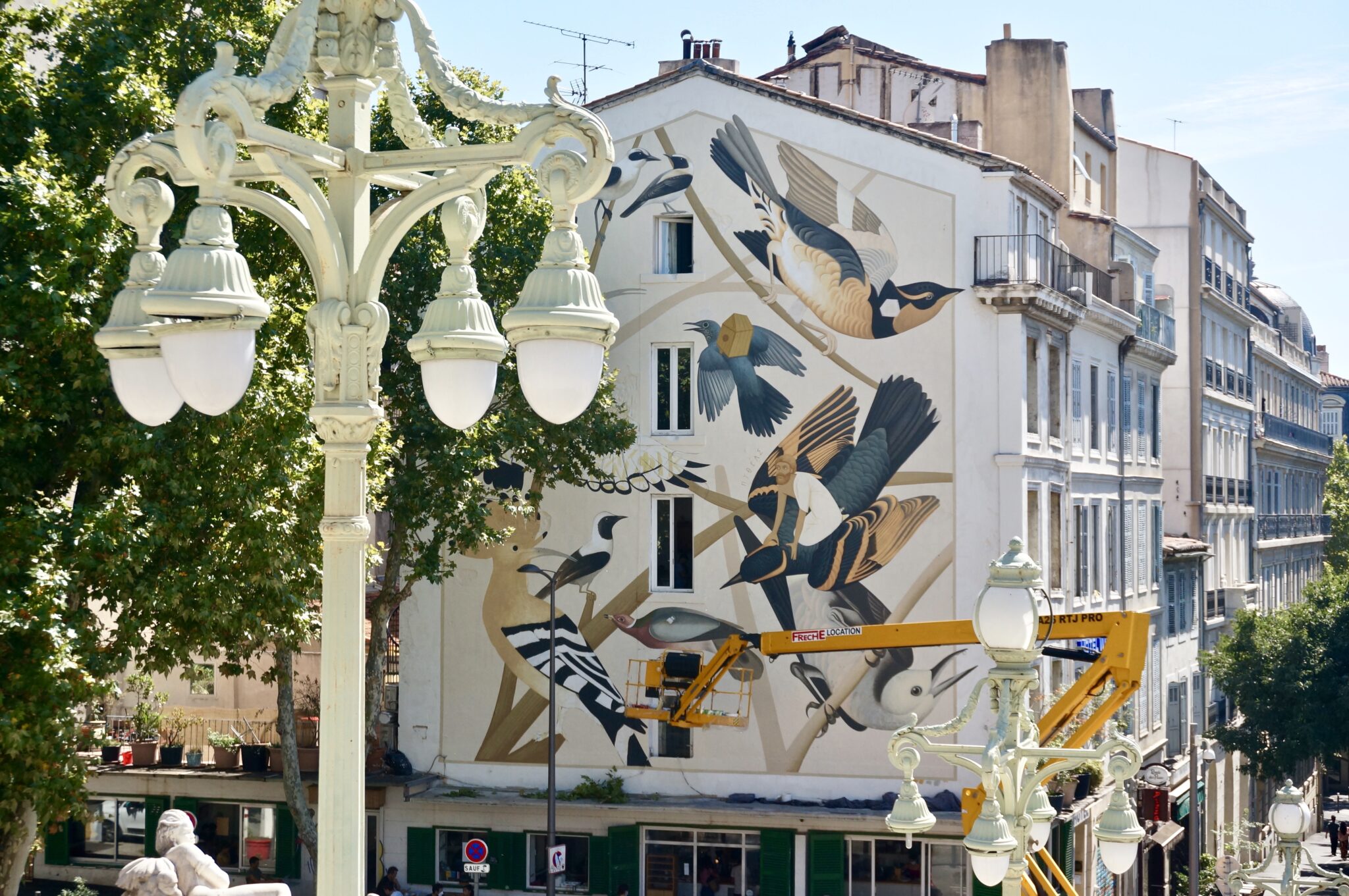 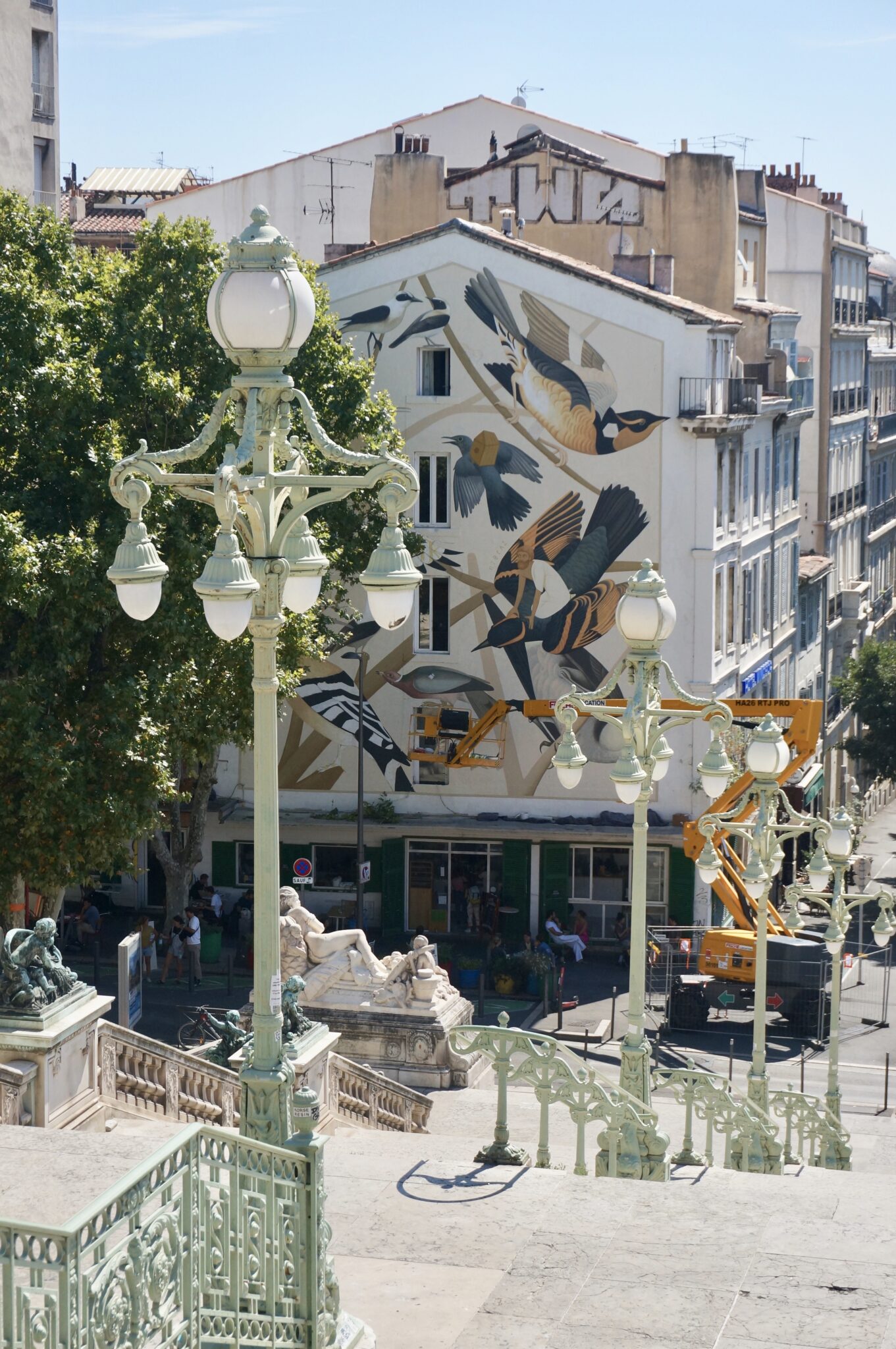 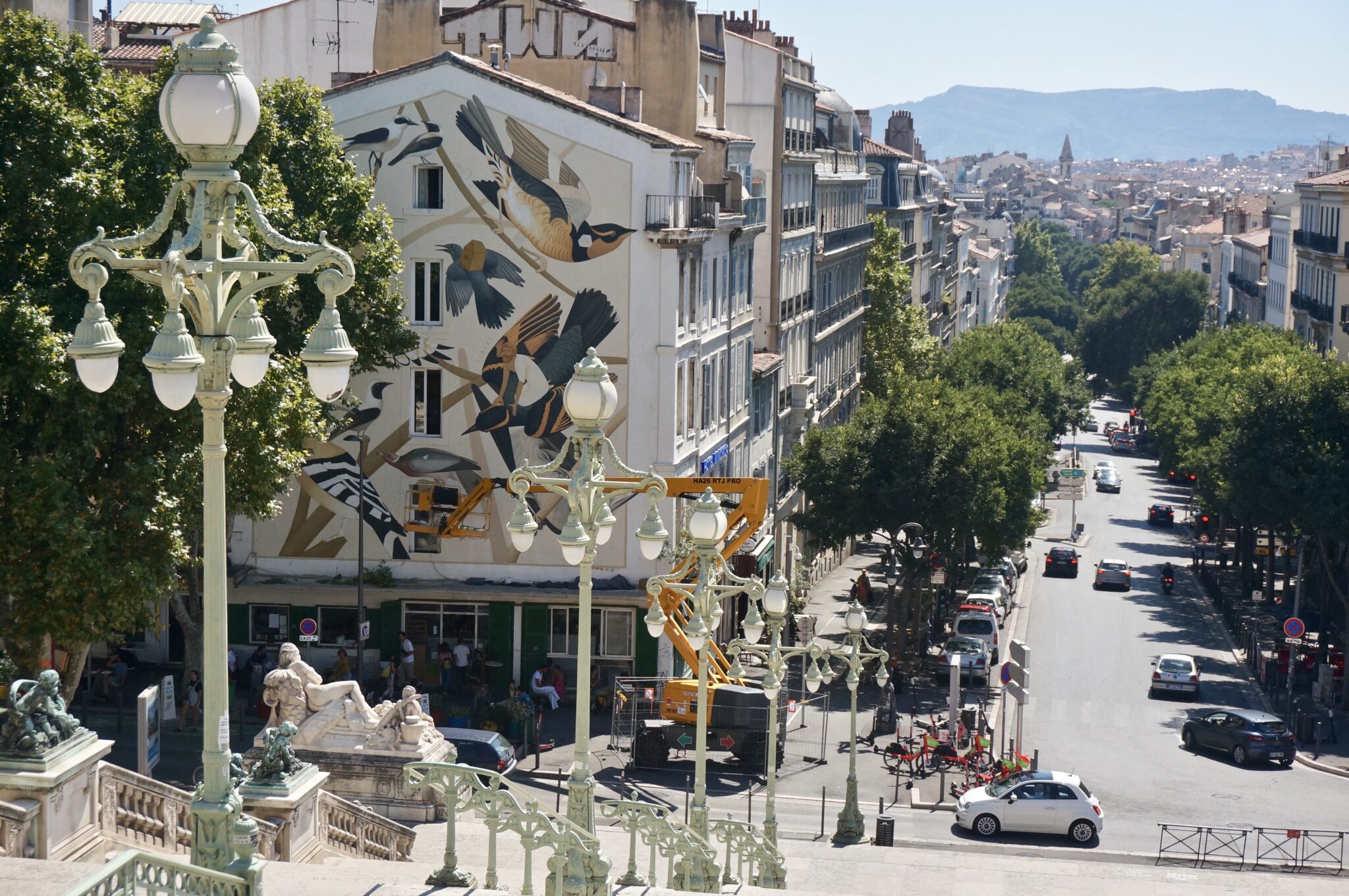 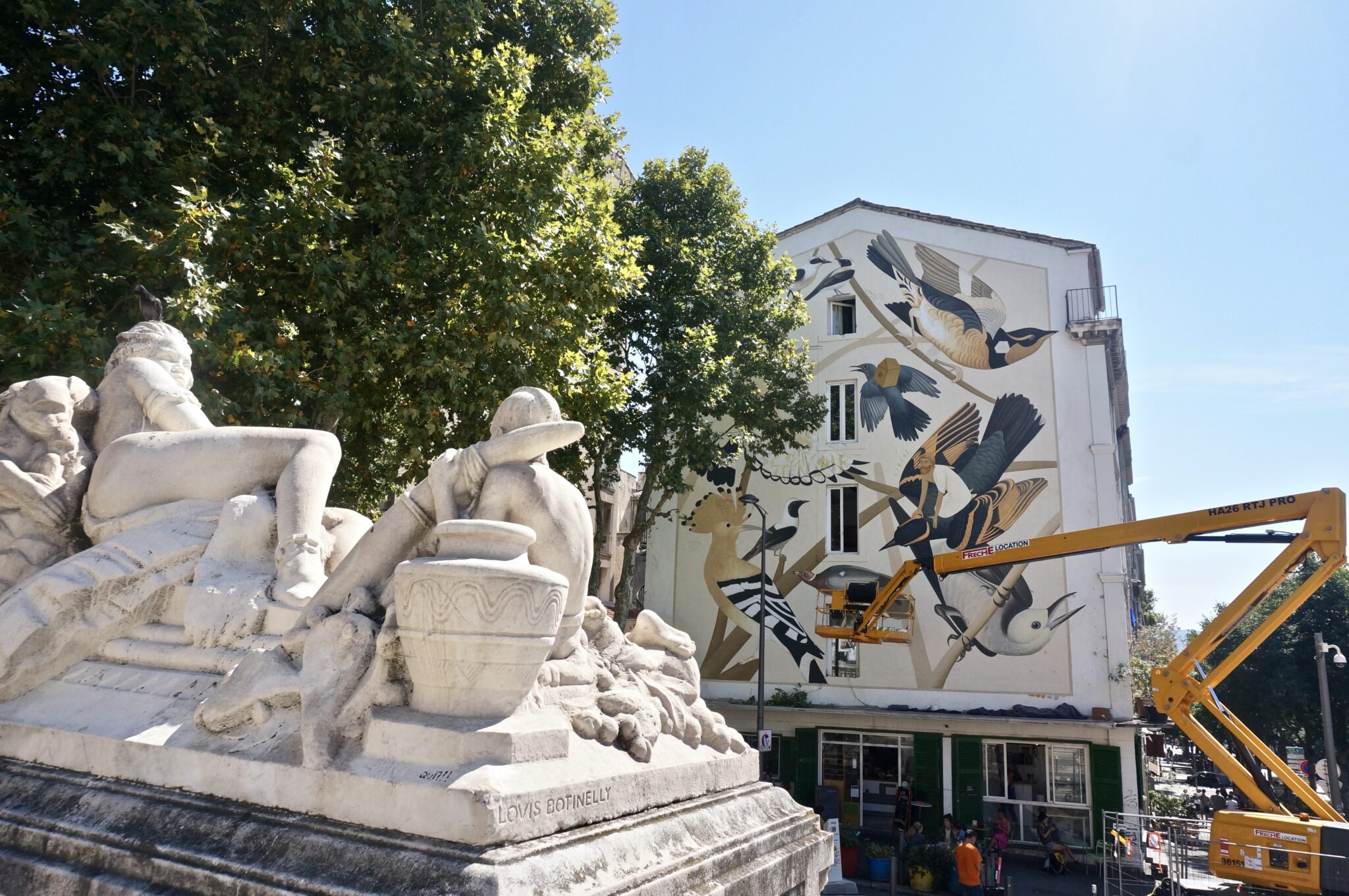 Fikos, an artist of international renown

Having been a graffiti artist and iconographer in Orthodox Christian churches, Fikos continues his development by painting murals in public places. The value of his works is exceptional, because it is the first time that the monumental Byzantine technique meets a contemporary movement like street art. A mixture of cultures, pigments and species that weave links between the open sea and the coasts, between humans and birds, between the past and the present of the Mediterranean, making the walls of the Phocaean city vibrate since its Greek origins.

On the occasion of the IUCN World Conservation Congress, COAL deploys the Audubon Walls in France, for a creative and committed citizen mobilization against the erosion of biodiversity caused by climate change