THE 2021 FOREST NIGHTS IN THE FONTAINEBLEAU FOREST

170 years after the creation of the artistic reserves by the painters of Barbizon and the impressionists, the Nuits des Forêts brought together on July 2, 3 and 4, 2021 more than 25 artists and enthusiasts of the forest through a rich cultural and sensitive program. A look back at this beautiful event that reminds us of the power of art from yesterday to today to inhabit and preserve forests. 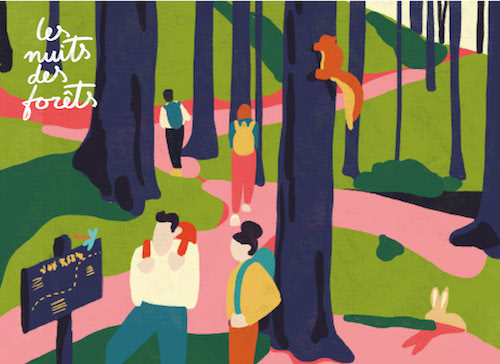 Throughout the weekend, walkers were invited to follow in the footsteps of the rich history of the forest of Fontainebleau and to rediscover the link between the forest and artistic creation. On a marked trail around the former art reserves, they were able to meet visual artists, who in turn are inspired by it and reveal its issues, its richness and its beauty. They were able to observe the peat sculpture of Caroline Le Mehautéan esoteric and immemorial form that revives our sensitivity to the earth element, the source of life; to read, in the leaves of an oak tree, the short story The Aleph by Jorge Luis Borges, printed in hollow by Jonas Delhaye with the help of a handmade writing tablet, like a secret formula inscribed in the heart of the things of the world; meet the fascinating characters of the artist Beya Gilles Gacha and see her perform her paintings, from the ritual to the canvas, thanks to herbs and medicinal plants harvested and processed.

Gathering the scents of the woods, Julie C. Fortier has created perfumes connected to the territories, to the cycles of life, of the seasons, of light, and to the history of the forest of Fontainebleau, which she shared with the visitors. As for Vincent Laval, he composed with the wood collected during his walks in the forests, a bushy sculpture in the form of a hut, a point of convergence between the human and the forest.

Musicians, singers and other performers also came to punctuate this walk with their practices inspired by the woods.

Finally, at dusk,Erik Samakh‘s Fireflies, a spectacular and immersive installation in the middle of the forest, lit up one by one, evoking throughout the night the magical presence of insects, but also their fragility and their disappearance. 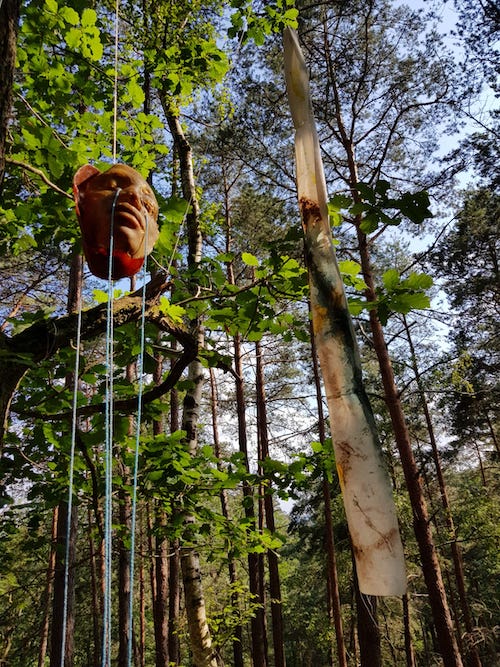 At the end of the day, the forest of Fontainebleau also hosted collective experiences, evening events, shows and artistic performances in the forest.

Vigil When art preserves the forest
At once a source of life and a resource for the living, a place of appeasement and a nexus of tensions, a field of dreams and of covetousness, a wild space and an object of management, simultaneously preserved and devastated, a carbon sink and a carbonized one, the forest alone symbolizes the bushy, timeless but burning complexities of the contemporary world. During a vigil, artists, historians and enthusiasts returned to the link between artists and the forest, from yesterday to today. A vigil moderated by Joan Pronnier of the COAL association, with : Geoffroy Delorme known as the Deer Man; Jean-Claude Polton of the Association des Amis de Fontainebleau; and artists Erik Samakh and Julie C. Fortier.

Show Le feuilleton d’Artémis, by Murielle Szac
“I am Artemis, I chose to live without constraint in the forests, I am surrounded by companions who made the same choice as mine and who are not ready to follow the model imposed by Aphrodite… Our toilets interest us less than running in the woods, love is not the center of our concerns. And yet we are all women, yes, like her! A breathtaking mythological tale to the rhythm of the bewitching melodies of the harpist Elisa Vellia.

Performance Hors champ, by Ivana Muller
Thanks to this installation-performance, the spectators were able to invest “a colony” made up of a dozen mosquito nets forming tents scattered among the trees. In their intimacy, far from the eyes, each one could become the interpreter of a conversation, of an encounter, which questions our relationship to nature and to the other, the idea of survival, of leisure, and of culture. 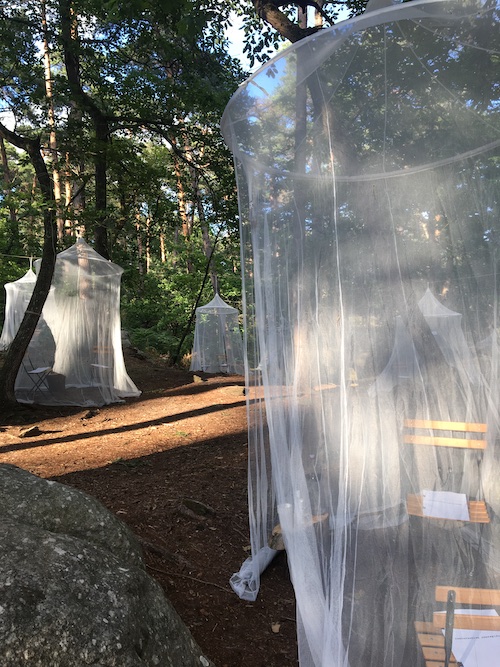 Performance The Solstice Dance by Le Corps Collectif
The twelve dancers of Corps Collectif, led by the choreographer Nadia Vadori-Gauthier have taken over the spectacular rocks so characteristic of the Fontainebleau forest for an original performance, an organic and wild dance echoing the ancient rituals that undoubtedly took place here, in the mists of time.

Performance The Last Supper, by Romina de Novellis
Like a painting by Leonardo da Vinci, The Last Supper by Romina de Novellis brought together around a large meal, a dozen women, professionals, feminists, and ecologists, artists, curators, researchers, scientists, activists. Starting from the allegory of the forest, these women, in a participative and choral performance, took its destruction as a symbol of the ecological crisis and of the exploitation of nature by man.

Four experiences with Catitu Tayassu, shaman and specialist in Amerindian cultures
Listen to the trees, from the movement of the seeds to the stems, be attentive to the microscopic movement, connect with the metaphysics of the sounds of the trees, dance with them, converse about the animism of the trees; discover in resonance with the Afro-American Indian religions, the oracle of 56 sacred trees, or explore the link between the celestial and starry space of the night and the one of the earth under the stars Catitu Tayassu shared his knowledge of trees and nature and invited us to extraordinary sensitive experiences.

Performance Les Taupes, by Philippe Quesne
On the occasion of the Nuits des Forêts, giant moles have emerged from their underground cave to take over the Montusiennes cave, where these strange mammals have decided to set up camp. Under the amused eyes of the walkers, these furry beasts tried to create a common living space. Through these gentle animals wrongly classified as pests, the director and visual artist Philippe Quesne has revealed a poetic of the underground in the heart of the forest. 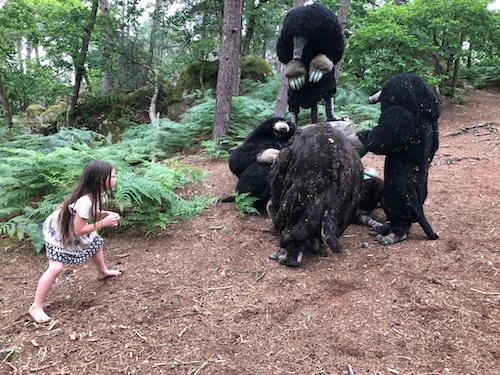 EXPERIMENTS IN THE DARK NIGHT

Night walk on the tracks of deer with Geoffroy Delorme, author of L’Homme-Chevreuil
The walkers were able to follow at nightfall Geoffroy Delormeauthor of the Roebuck Man (published by Les Arènes) and share the experience of the man who lived for seven years in a forest in the Eure region with deer as his only companions.

Discover and observe bats with Alexandre Butin (ONF)
Thanks to an ultrasound listening equipment, the festival-goers got acquainted, during a night outing, with bats, this unknown and fascinating animal.

The night of dreams, meditating under the stars, with Catitu Tayassu
Exploration of the link between the celestial and starry space of the night and that of the earth, with the shaman and specialist of Amerindian cultures Catitu Tayassu

A storytelling stroll in the dark night with the artist Erik Samakh, a great connoisseur of forests in the heart of his light installation, Les Lucioles.

The oak chain, discovery of the wood industry around a mobile sawmill
From felling to processing, through skidding and sawing operations, festival-goers were able to witness, with Christophe Sallé and its mobile sawmill, at all stages of the transformation of oak from the tree to the furniture.

Realization of a wooden totem with Julien Colboc
The sculptor Julien Colboc organized the realization of a totem, magnifying a dead tree in edge of forest, in the immediate vicinity of the forest house of the crossroads of 8 roads. The artist has used and shared his ancestral (axes, adzes, planes) and contemporary (chainsaws, laser engraving) skills to transform a piece of raw wood into a colossal work before our eyes. 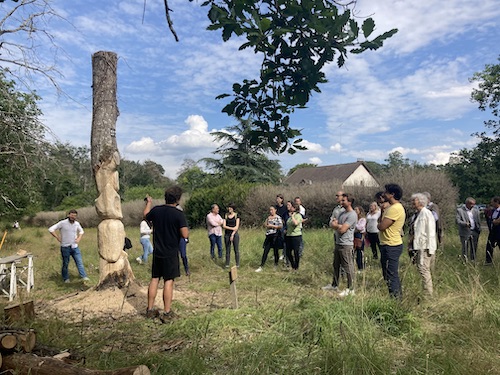 The Nuits des Forêts association is the result of a collective reflection between actors of the forestry and wood industry and the cultural and artistic sector. It wishes to invite society to take up the issue of the forestry crisis by initiating actions to raise awareness and mobilize the public on forestry issues.
An artistic proposal by Lauranne Germond (COAL) and Sara Dufour.