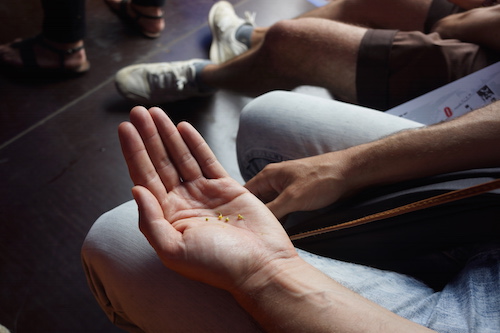 On the occasion of the 8th edition of the COAL Art and Environment Prize, the Musée de la Chasse et de la Nature, COAL, the French Ministry of Culture, the French Agency for Biodiversity and the French Centre for Funds and Foundations are organizing an afternoon of Fertile Cultures, the art of ecological transition.

The ecological transition is an individual and collective journey that involves a profound transformation of the way we live on earth and consume its natural resources. It is a question of changing our relationship to the world, and therefore our representations.

Whether it is at the individual level or at the level of organizations such as foundations and endowments, the path is similar and starts with an awareness, a quest for meaning, for care, for commonality, a desire to change the world. But how do we bring about this awareness? Culture is an essential and fertile vector.

With artists, whose works – nourished by this awareness – participate in the construction of new representations, and foundations and endowments that support them, we will discuss the challenges of transforming our imaginations and our practices.

Through the approaches taken by the Fondation de France’s “New Sponsors” program, by Lucy and Jorge Orta at Studio Orta Les Moulins or by the Daniel & Nina Carasso Foundation in France and Spain, and through the testimony of artists engaged in situated artistic practices, such as Olivier Darné, we will look back on personal and institutional paths, on shared awareness and their translation into artistic devices for transforming our relationship to the world.

Other witnesses, actors of this same transition, will reflect on the effects that a fruitful collaboration can produce, on the institutions, on the artists and on those who follow their work. The François Sommer Foundation, the Tara Endowment Fund, Sylvain Gouraud, Elsa Guillaume and Noémie Sauve will report on experiences of change initiated and disseminated to their audiences and partners as a result of these collaborations.

16h-18h – Screening of The Memory of the Glaciers by Angelika Markul (Winner of the COAL Prize 2016)
The memory of the glaciers, 2017, video, 10’51”
The screening is preceded by a presentation of the film by the artist at 4pm.

The memory of the glaciers is a myth at the confluence of science and fiction, the first part of a trilogy of the origin and existence of man until his evolution. The film takes as its starting point the discovery of the Churyumov-Guerassimenko comet, a comet that could contain an explanation of the origin of life on earth. The video installation tells the story of the tragic collapse of a glacier in southern Patagonia, evoking the amputations of a gangrenous body. At the heart of these organic rocks – comets and glaciers – are preserved in equal measure life and extinction. Angelika Markul reveals the secrets they keep (real or fictional) through images tinged with mystery.

Fertile crops, the art of ecological transition
November 29, 2017, from 2:00 to 6:00 p.m.
Auditorium of the Museum of Hunting and Nature
62, rue des Archives – 75003 Paris
Free admission subject to availability of seats
Reservation recommended: reservation@chassenature.org or 01 53 01 92 40